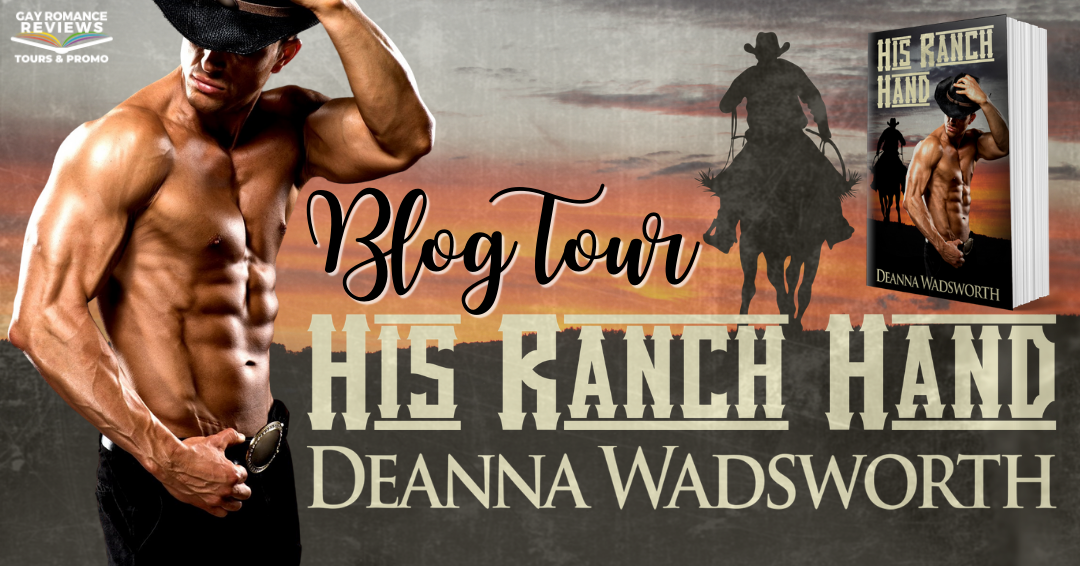 His Ranch Hand by Deanna Wadsworth 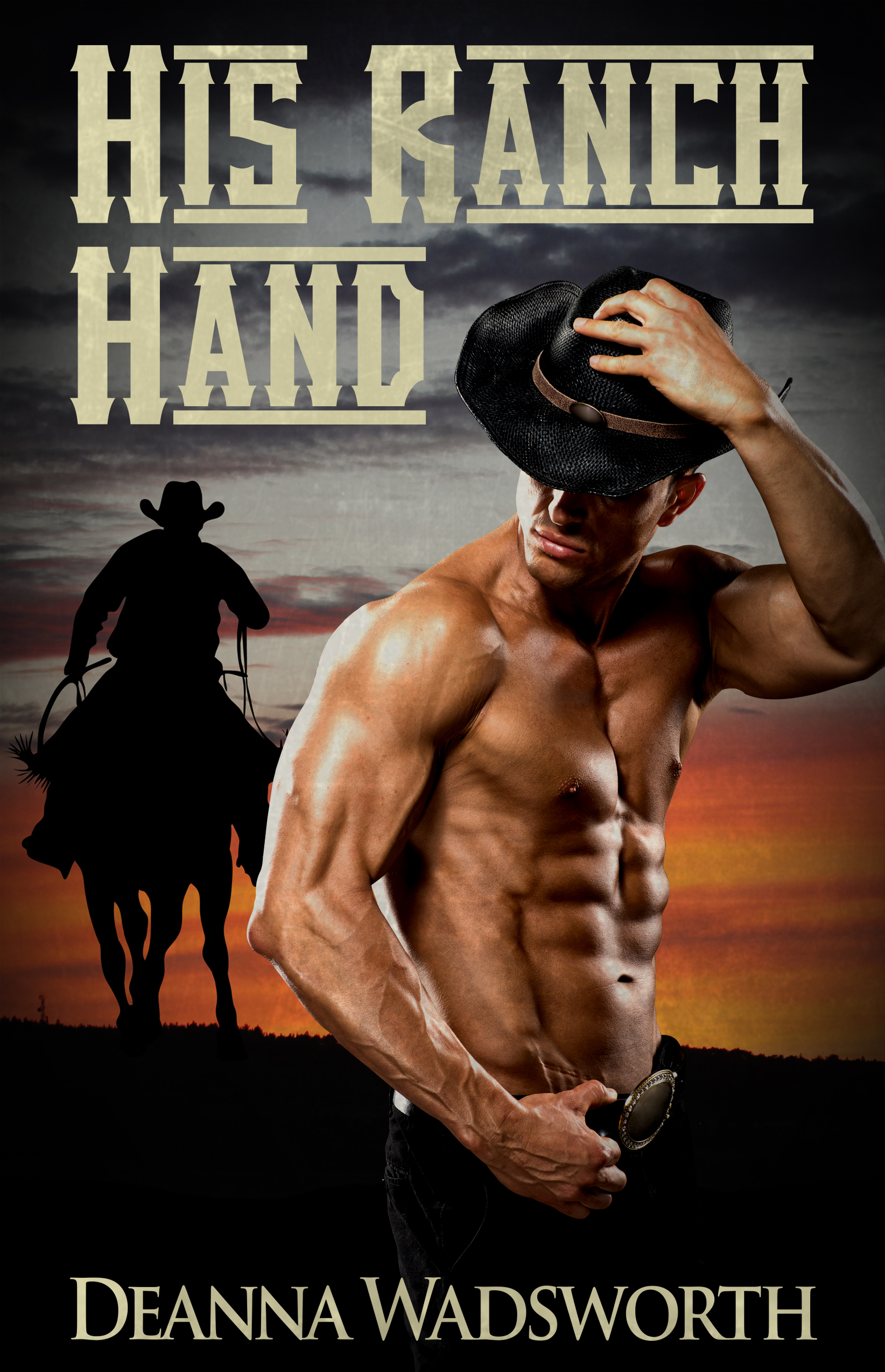 Cowboys don’t cry.
West of the Pecos, if a man shows a vulnerable side, his last glimpse of this life might be at the end of a barrel.
Cowboy and drifter, Myron Poste shrouds his life in mystery, carefully following a strict code to stay alive. Fellow ranch hand Cade Buchanan is big, hairy, and strong—not the sort of man to trifle with.
One fateful night while driving a herd of Longhorns north to Santa Fe, Cade confronts Myron. With the swiftness of a West Texas wind, desire seizes control and a passionate affair begins. Pride has always held Myron back, but he can no longer deny his submissive nature when Cade gives him just what he craves—pure, lustful dominance.
When the drive ends, they must part ways. Will the memories of their untamed passion under the big Texas sky be powerful enough to reunite them?

First day of the drive, no men got hurt, but a cow broke its leg, so it was steak for dinner. With a full belly and muscles tired from a long day in the saddle, Myron went to check on Lucy. He’d ridden her this morning, taking out Duke and Brave the rest of the day. Lucy was a jealous sort, so he brought her an apple before he hit the hay. He didn’t have watch duty, and a full night’s sleep called his name.


Young Jacob wasn’t watching over the horses, it was Cade. He leaned against one of the posts of the makeshift corral, having a smoke and his back to Myron.


He only hesitated a moment before casually walking up. “Evening.”


Cade didn’t startle, probably already heard his approach. He turned and a waft of smoke obscured his face. “Poste.”


Ignoring the way the much bigger man’s very presence made Myron jumpy, he clicked his tongue to get Lucy’s attention. Several horses stirred, and after a shuffling of beasts, Lucy, ears up, made her way over. He withdrew his knife and sliced off a piece of the apple.


“Here, girl,” he said, holding out the slice with a flat palm. Her velvety lips fluttered over his hand as she took the treat.


“Gonna have them all over here in a moment,” Cade remarked, as Duke, the bay Myron had ridden this afternoon pushed up against Lucy. He cut him off a piece too.


Cade shifted to lean sideways on the post, smoking. His gaze stayed locked on Myron as he alternated cutting pieces of apple off until it was gone, and a third horse had nosed its way over too, seeking a treat.


“You spoil that horse,” he remarked.


“I do.” When Myron put away his knife, Cade held out his cigarette in offering.


He only hesitated a moment before taking the cigarette and having a nice toke. Cade’s tobacco was sweeter than his, and he liked it. He held the smoke in, and passed the cigarette back, briefly allowing himself to think that once more, their lips had both been on a cigarette. Would Cade’s kisses have the same lingering sweetness of his tobacco?


Myron stroked Lucy’s nose, desperate for something to anchor his wayward thoughts. He wanted to stay, he needed to leave, and he dreamed about stepping closer. Instead he patted his horse and agreed, “It is.”


“There’s the Big Dipper,” Cade said, pointing up. “And the little one.”


Cade seemed to be in a chatty mood, and though it only made Myron’s yearning stronger, he felt obliged to indulge him. He gazed up at the star-spattered navy blue sky, identifying several constellations right away. He pointed to one. “Orion.”


“Which one is that?” Cade stepped closer, gazing up in the direction Myron had indicated.


There had been no need for Cade to come so close, for no tree obscured their view. And there should be no reason for Myron’s heart to race like a cattle stampede either, but it did nonetheless. He cleared his throat, not surprised by how hoarse he sounded or the way his hand trembled as he pointed at the constellation. “See there, the three small ones all clustered? That’s Orion’s belt.”


Cade moved closer still, but his gaze remained heavenward, using Myron’s finger like the sight on a rifle. “There?” He pointed up too, their arms flush now.


He stood so close, Myron could make out his thick eyelashes in the moonlight, see how long they were, the blond tips disguising that fact at a distance. There was no distance between them now, and their arms were still touching. Helpless, Myron gazed at his full lips and licked his own in want.


“Y-yeah,” Myron choked out, his body responding to Cade’s overwhelming manly scent, his nearness, and the fact that he didn’t mind having his arm pressed against Myron. “Th-that’s it.”


At the peculiar sound of his voice, Cade turned his head and looked right at him. Not moving away, he offered a sideways grin. “You sure? You ain’t even looking up.”


Myron stepped away so fast, Lucy reared her head and huffed her disapproval. Even in the dark Cade had probably seen Myron staring at his mouth. His heart pounded, his arm on fire where it had been pressed to Cade’s. He could still feel the heat of his body and the cold absence of it in the air between them.


“Yes, I was,” Myron argued, feeling a fool. He pointed up with confidence. “You’ve got it. That’s Orion.”


Still smiling at him, Cade flicked his cigarette to the ground, and only released his gaze to glance down and extinguish it. When he looked back up, Myron hoped he didn’t notice the growing bulge in the front of his trousers.


What the hell were you thinking, staring at him so openly?


And why did he stand so close in the first place?


“Thanks for sharing it with me,” Cade said, voice a heady timber that did nothing to quell Myron’s ardor.


“Now I know three constellations,” Cade said, then he looked up. “Know any more?”


He cleared his throat, and pointed out Pegasus. “That there square? It’s Pegasus.”


Myron couldn’t help but smile at the childlike wonder in Cade’s tone. “Yes, the same.”


“I suppose the stars’ll look different in the Dakotas.”


“Suppose so,” Myron agreed, stuffing his thumbs under his belt and feeling off kilter. “They’re different down here in Texas than they are in Pennsylvania.”


“You stayin’ on another season with Lawson?” Cade questioned after a moment.


“Nope, gotta head back east. My family’s got a bit of a situation I need to tend to, now that Mama’s passed.” He didn’t want the ugliness of what lay in store for his future to tarnish this rare moment alone under a blanket of beautiful stars with a man he craved more than air itself, so he asked, “You’re really going that far up north?”


“Yup, parcels are cheap up there. Public domain land to graze on too.”


“You plan to work it by yourself?”


“At first,” Cade said. “Plan is to get there and build a shelter for me and a couple horses. Figure I’d buy cows in the spring. Won’t let me take Longhorn up there because of the ticks.”


Myron nodded, knowing full well all the hassles settlers and farmers, not to mention the government, inflicted on Texas cattleman because of a tick the cows carried. Didn’t bother the herd, overmuch, but it did cause problems for folks and other animals. That’s why they were driving the herd on the west side of the Pecos through Apache lands to Santa Fe. Too many restrictions on the safer route to the railhead in Abilene.


“Thinkin’ I’ll plant corn for feed,” Cade continued, the excitement evident in his voice. “Maybe have me a little vegetable garden come springtime. We set out later than I wanted with this herd, and the seasons come faster up there. Maybe I can get a few things in the ground before the frost. Or at least till some earth for early spring planting.”


Myron smiled, thinking of Cade harvesting things like tomatoes. He could imagine him taking a bite of one, still warm from the sun and ripe with sweetness, the juice dribbling down his chin and beard, the way Myron had done as a child. Though the visions Cade conjured held none of the innocence of childhood.


Pushing those images away, he said, “Good plan.”


“Don’t suppose I need much more than a snug shelter and supplies for me and the animals over the winter. I’ll be able to hunt too. Can ya just picture it?” Cade said wistfully. “Your own land, a ranch, small house. Maybe someone to share it with.”


At that last whispered sentence, Cade dropped his gaze from the heavens and looked at Myron with a faraway smile.


Myron’s throat went dry but he managed to nod. “You paint a pretty picture, Buchanan.”
He imagined his own version of that picture, the two of them holed up the entire winter, snuggled in one bed inside a tiny little cabin that smelled of man, soot, and horse. His thoughts shouldn’t go to places like that because it made his cock throb. Thankfully the darkness, and Cade fixing his attention back on the sky, provided him a moment to adjust the indiscretion.