The Coven by Stephanie Burke - Release Blitz with Excerpt and Giveaway 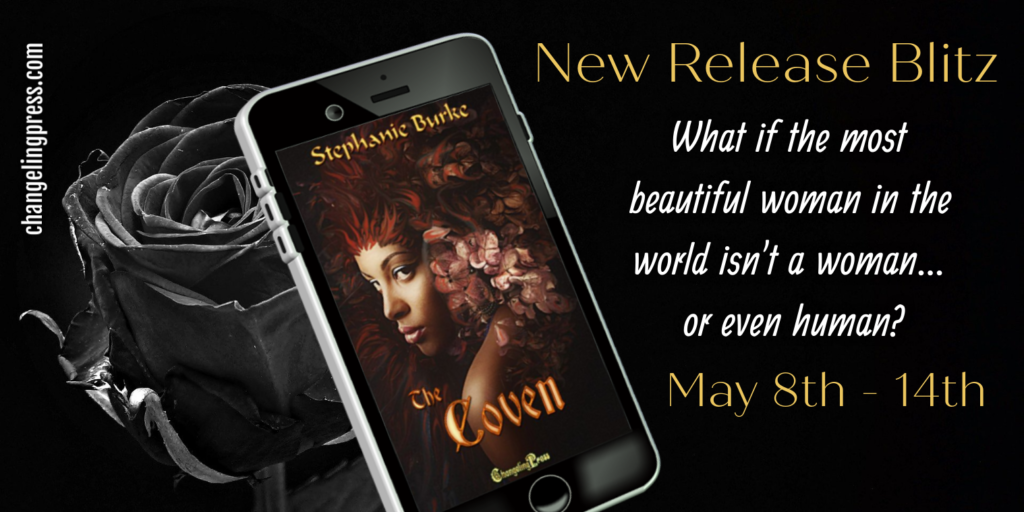 Cyprus Reid is an enigma who courts the spotlight while carefully maintaining her mystique, intriguing legions of fans with her stylistic lyrics and a voice that brings many to tears. Even more intriguing than her all-male entourage is the fact that people are dying to get to her… literally.

To ex-Navy SEAL-turned-government intelligence operative Jason Giles, Cyprus is either a victim of an elaborate conspiracy, or the most fiendish killer since Jack the Ripper. Sure, the victims had shady pasts and shared a connection to a strange incident at Mount McKinley some fifty years ago, but that doesn't mean they deserved to die, seemingly drained of life while engaged in acts of wanton carnality.

Jason is sent to discover the truth, but what he finds is more seductive, more intriguing, more enticing than a mere boy in a dress. What Jason finds is the existence of The Coven. And once they discover you, there is no going back.

“Ms. Reid! You are an inspiration! I love you!”

“You are a dirty tramp, and you seduce men into worshiping you, you nasty slut!”

“You stole my husband, you bitch!”

And Cyprus, as usual, ignored it all.

The flashing bulbs temporarily blinded her, but she ignored the minor inconvenience as well, as she moved with her customary style and grace down the wrinkled red carpet that had been rolled out for her visit.

She turned and flashed one last mysterious smile at the gathered crowd, both the hateful and the adoring fans, and silently made her way into the safety of the hotel.

“Ms. Reid?” She looked up at the oh-so-proper, British-accented voice, realizing absently that it was the hotel manager.

She paused, giving the short, balding man her full attention, noting how he flushed a little at her scrutiny.

The doors behind them closed with a <em>whoosh</em>, muting the noise and shouts of the crowd, though bulbs continued to flash as paparazzi desperately tried to get that winning shot of one of the world’s most beautiful and renowned vocalists.

“Um.” He cleared his throat, tugging at his collar as he shifted from foot to foot, more like an adolescent than a grown man. “Security has been tightened on your floor as you requested. Also, you are the only occupant of the twenty-seventh floor, though we can easily accommodate you and your entourage in the penthouse suite.”

“Thank you and that will be all,” a tall, long-haired man spoke, towering over both the manager and Cyprus. “Though we appreciate the hospitality you and your staff have provided thus far, Ms. Reid does not prefer the penthouse or any of the presidential suites. The twenty-seventh floor is perfect for our needs.”

The manager froze, staring at the man as if suddenly noticing his presence and that the sheer aura surrounding Cyprus had rendered the world blind to anyone else around her.

But then, that was part of her mystery.

How anyone could ever not notice them was a complete mystery, but usually they managed the neat theatrical trick of fading into the background. Once they decided to be seen, however, a blind man couldn’t miss them.

Each stood over six feet tall -- five perfectly formed men, each unique and differently beautiful in his own way, who made it a point to surround and protect Ms. Reid from any and all activities that could be considered dangerous, especially keeping any unsavory fanatics at bay.

The one who spoke to him -- Unus, he had discovered -- the one with long, dark hair, appeared to be the spokesman for the rest of the group. If there was anything to be settled, this one was the one to do it.

He stood before the manager, his perfectly cut Savile Row suit doing nothing to hide the raw masculinity and barely leashed savagery that seemed to glow from his eyes.

The other four, all mystery men of different ethnic backgrounds and styles, moved in closer, alert to any trouble that might develop.

“V-v-very g-good, s-sir,” the manager stuttered, growing nervous now that all that male power was directed toward him. He reached into his pocket, then took a quick step back as all the men moved forward, hiding Cyprus behind a wall of muscle.

“It’s just the electronic key card,” he quickly explained, sweating under his collar as if suddenly fearing for his very life. “Just the key. No one else besides our head of security has a copy.”

“Your head of security?” the man asked, leaning forward, getting closer so that the manager could make out small, very fine tribal tattooing along his hairline, down in front of his ears, and down into the collar of his shirt.

“Jason Giles,” the manager explained. “Very good, comes highly recommended. He is securing the twenty-seventh floor as we speak. Ms. Reid’s safety is our chief concern.”

A slim, dusky hand reached between the two of them, halting any movement the tall man might have made and pulling him back into line.

He conceded to the smaller female whose hand now rested on his arm, nodding once. “Ms. Reid is exhausted…”

“Oh, excuse me!” The manager snapped back into host mode and hastily directed the small party to the private elevators. “These only stop at executive floors, like the twenty-seventh,” he explained, while placing the card against a small scanner.

The doors immediately opened, and he quickly ushered them inside. The men immediately surrounded Cyprus protectively. Within seconds, they were whisked to the proper floor, and all exited into the plushly carpeted, brightly lit hall.

“As requested, Ms. Reid’s room is in the center. The rooms on either side of her are prepared for occupancy and can be accessed only though the interior doors that are in Ms. Reid’s main suite. All others are closed off and locked, both electronically and by physical means. This floor is as safe as Fort Knox.”

That said, he led them to a door where another man, one with nearly white-blond hair, stood at attention.

Instantly, the men were once again on high alert, their bodies tensing as they formed a barrier between Cyprus and the unknown man.

“This is Jason Giles,” the manager introduced. “He is head of security, hired exclusively for your safety during this visit.”

“An honor.” Jason spoke softly, his eyes going to the odd collection of men who surrounded the artist.

“We thank you.” The long-haired spokesman for the group eyed the strange male carefully. “But your services, though appreciated, are not needed.”

There was steel in that voice only a dead man could miss. The undercurrents flowed strongly and were rife with testosterone.

“Be that as it may,” Jason replied, “I remain your first line of defense. If something gets out of hand, I will do my best to quell it before it even makes it this far. And if you have any issues, no matter how minor, be sure to let me know. Any extra security is a must. We all have to protect the beauteous Ms. Reid,” he added, with barely veiled sarcasm.

“If you think --” the now disgruntled leader of apparent party-toy men began, but a slim hand pressing against his arm stopped him again.

Huffing and visibly fighting to control himself, the man nodded and stepped aside.

And Jason got his first glimpse of the real-life Cyprus Reid. 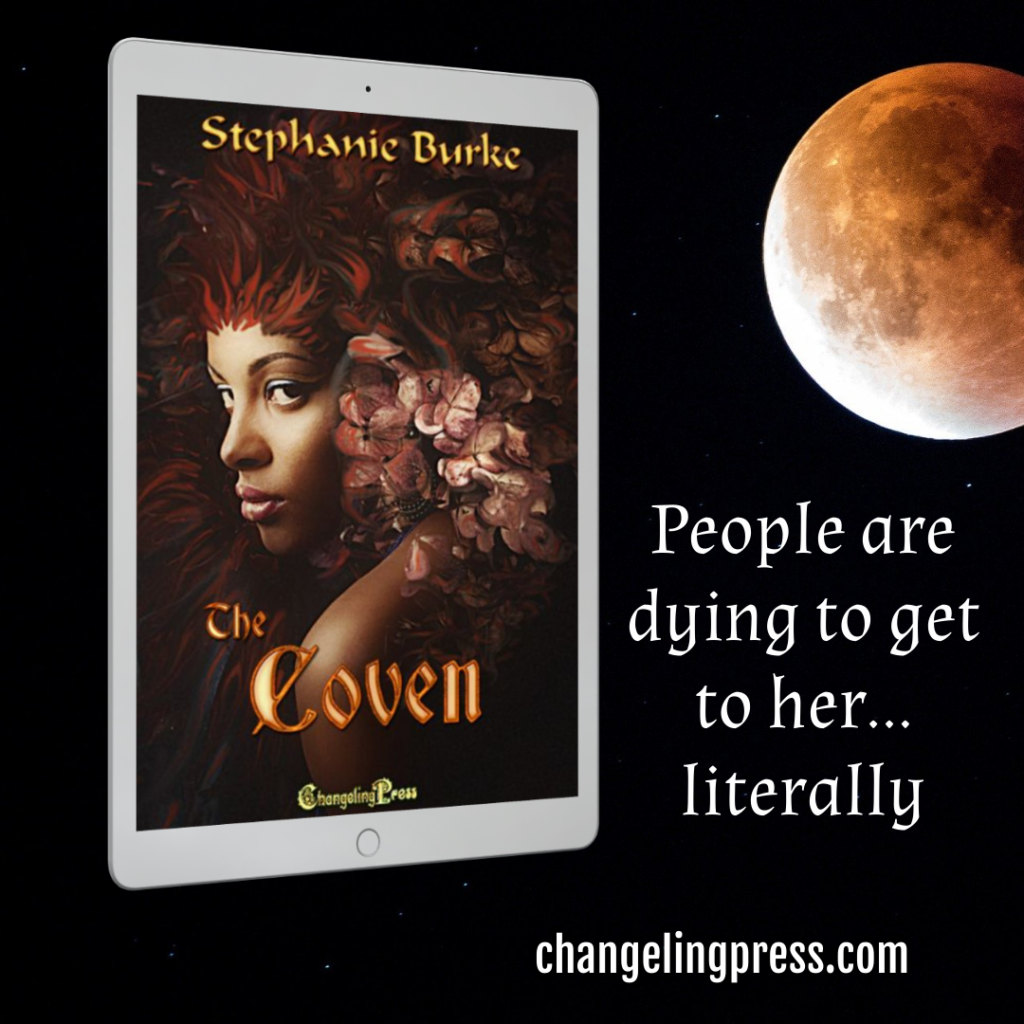 From sex-shifting, shape-shifting dragons to undersea worlds, sexually confused elemental Fey and homo-erotic mysteries, all the way to pastel-challenged urban sprites, Stephanie has done it all, and hopes to do more.

Stephanie is an orator on her favorite subjects of writing and world-building, a sometime teacher when you feed her enough tea and donuts, an anime nut, a costumer, and a frequent guest of various sci-fi and writing cons where she can be found leading panel discussions or researching varied legends and theories to improve her writing skills.

Stephanie is known for her love of the outrageous, strong female characters, believable worlds, male characters filled with depth, and multi-cultural stories that make the reader sit up and take notice.