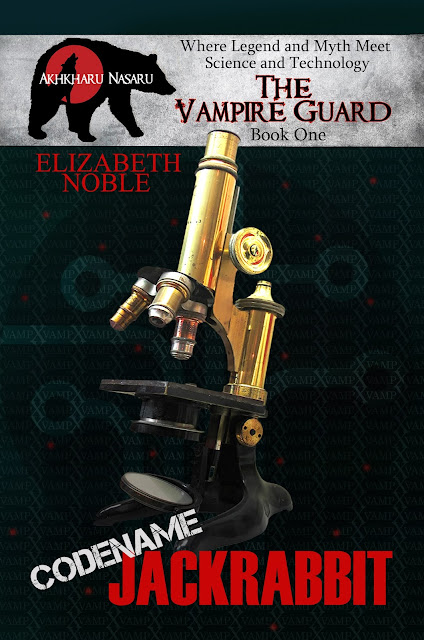 Tag Line: Where Legend and Myth Meet Science and Technology

Vampires and werewolves live long lives. The Sleepless City saga might have ended but the story continues…

Welcome to The Vampire Guard, where legend and myth meet science and technology.

Vampires make the best spies. Throw a smart-mouthed werewolf in with three vampires, mix well, and The Vampire Guard's newest team is bound to become one of their greatest assets. Super spies with a full range of skills. Warrior, hacker, thief, and scientist.  They get in, do the job and get out before the bad guys ever know what hit them.

Forge, Blair, Declan, and Lucas are thrust into the world of high-tech spies and top-secret espionage conspiracies. Recruited into the world’s most elite and secret organization with one singular mission. Protect those who can’t defend themselves from ruin.

Life becomes complicated when an impending Presidential visit to their town, Boggslake, throws them headlong into the world of the vampires and werewolves of the Vampire Guard. Very quickly they uncover and confront a werewolf terrorist organization known as the Qiguan.

Together they must thwart an assassination attempt on the open waters of Lake Superior while tracking a previously unknown biological weapon controlled by the Qiguan—a weapon which may very well mean death for one of them.

Declan backed away a few steps and held the flower up again. “You’ll probably be astounded at the detailed information I’ve gathered about werewolves. It’s amazing what you pick up after a century or two.” He poked at one of the bottles with his toe, nudging it closer to the dust. “For instance, I know that after a full-moon shift, you’re incredibly thirsty. So much so you’ll do anything for water. As a matter of fact, if you don’t get enough water within a few hours, your body will begin to severely dehydrate.”

Grier licked his lips, gaze shifting between the water and Declan. “What do you want?” Grier said in a shaky voice.

“Tell me about Bronwen Martell and Henry Vaughn.”

Declan heaved a long-suffering sigh and said, “It’s a simple request. However, I have to admit I expected your answer. Let me tell you a few things. I know you have been involved somehow in a string of freshwater vessels being sunk. I also know that those vessels often carried children and people on vacation. Innocent people who died.”

“I suspect you were responsible for the death of Henry Vaughn and you are somehow forcing Dr. Martell to continue to act as a front for whatever you’re doing,” Declan finished calmly.

He ran one finger over the flower and sniffed it, then crouched in front of Grier. “As a matter of fact, the lovely Bronwen is scared to death of you. She’s a sweet, sweet lady, and I don’t like to see ladies bullied.” Declan took one of the bottles, opened it and dropped the flower inside.

Mystery, action, chills, and thrills spiced with romance and desire. ELIZABETH NOBLE lives by the adage "I can't not write." She doesn't remember a time when she didn’t make up stories and eventually she learned how to put words on a page. Those words turned into books and fan fiction that turned into a genuine love of M/M fiction. A part of every day is spent living in worlds she created that are filled with intrigue and espionage. She has a real love for a good mystery complete with murder and twisty plots as well as all things sci-fi, futuristic, and supernatural.

When she's not chronicling the adventures of her many characters, Elizabeth is a veterinary nurse living in her native Cleveland, Ohio. She has three grown children and now happily shares her little, brick house with a spunky Cardigan Welsh Corgi and his sidekick, tabby cat. Elizabeth is a fan of baseball, basketball (go Cavs and Cleveland Baseball) and gardening. She can often be found working in her 'outside office' listening to classic rock and plotter her next novel waiting for it to be dark enough to gaze at the stars.

Elizabeth has received a number of amateur writing awards. Since being published, several of her novels have received Honorable Mentions in the Rainbow Awards. Jewel Cave was a runner-up in the Gay Mystery/Thriller category in the 2015 Rainbow Awards. Ringed Love was a winner in the Gay Fantasy Romance category of the 2016 Rainbow Awards.