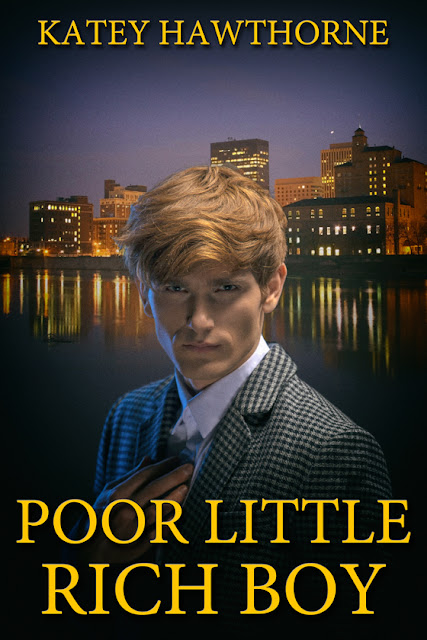 Family, amiright?
Will Ted and Wally remain at loggerheads for the rest of their lives? Will Ted have a feeling? (If fake-fiance Ryan has anything to say about it, hell yes, lots of them.) Will Wally stop acting like a petulant child? Check out Poor Little Rich Boy to find out!
POOR LITTLE RICH BOY
By Katey Hawthorne
47k m/m, gay/bi contemporary romance
Tags: tropey, low angst, marriage of convenience, friends to lovers, millionaire
ISBN: 9781646566389 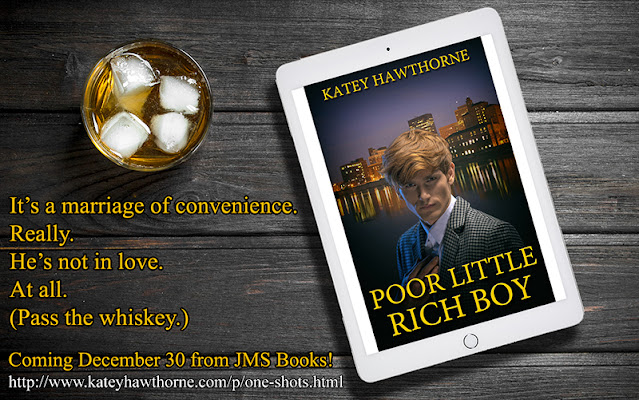 Blurb:
Ted MacTaggart's overbearing father is still trying to control his life, even from the grave. His will insists that, in order to inherit the family company, MAC Superior, Ted must be married by his twenty-fifth birthday -- and the marriage has to be "real." As in the board of MAC has to sign off on it.

Ted could fight the will, but then the handsome, artistic Ryan Costa, an old friend from school days walks back into his life, offering to be his groom-of-convenience. Ted draws up the contracts and Ryan, who has family medical bill problems, agrees gladly to the terms. Ted, emotionally walled off and afraid of his attraction to Ryan, also suggests they should keep their relationship strictly professional. Caring for people has always proven a weakness for him. Now isn't the time to start.

It's not long before Ryan's charm breaks through Ted's walls, but Ted isn't his own worst enemy in this case. Other forces are vying for MAC Superior, and even when their relationship is becoming the real deal, its shaky foundations land Ryan and Ted in trouble.

Hello, and thanks for having me here at Wicked Faerie! Today I'm chatting about my latest release, Poor Little Rich Boy from JMS Books. It's a combo of friends-to-lovers and marriage of convenience/fake relationship tropes, both of which are my kryptonite. Fun to write, for sure, and I hope fun to read. But sometimes it's not just about steamy romance.
Okay, no, mostly it's about steamy romance. But bear with me.
Sometimes a character's relationships with their family say everything about them, and that goes for my hero, Ted, in this book. His dad left a will insisting he had to be married by 25--and stay that way for 10 years--to inherit the family business. His mom bailed on him when he was a kid. And then there's Wally, his little brother, who's having a harder time dealing with their dad's death than Ted. Or so it would seem. (CW: Alcohol use and brothers being jerks.)
----------------------------------------
From POOR LITTLE RICH BOY by Katey Hawthorne

“Jesus, Teddy, calm your tits,” came a voice from the kitchen.

Wally was there in an open bathrobe, leaning over their father’s morning Wall Street Journal and a mug of something.

“Since when do you read the Wall Street Journal?” Ted blurted.

“Aunt Carol called,” Ted said, moving to the liquor stash. He was ready for some hair of the dog.

“Don’t call her that, you dickhead. Why are you here?”

True enough. The houses had been split between the two of them, the fortune between them and their sister, who lived in New York with her mother. Fair and square in that much, at least. “Yeah, but you hate it here.”

“You call it ‘flyover country’.”

“No more than Columbus.” Ted pulled down the Johnnie Walker, tore off the lid of his espresso, and liberally seasoned it.

“Waste of good liquor,” commented Wally, the one-man peanut gallery. His eyebrows were up, though, showing genuine surprise.

“You know I only like single malt straight,” Ted reasoned. He was in no mood for a conversation about the importance of self-medication in these difficult times.

“Brat. Wally, seriously, why are you here?”

Wally looked up from his paper finally, lifted his coffee cup, and took a sip. Then he said pointedly, “To help you.”

“Help me?” Ted snorted out a laugh in spite of himself. “That’d be a first. Help me with what?”

Wally scrunched up his face. He looked remarkably like their father when he went Full Spoiled Shit like that. “Our relatives looting the place, for one. Aunt Carol brought an army of cousins.”

Ted shrugged. “If you want something, take it before they do.”

“Dad left people stuff they were sentimental about.”

Ted was too hungover to handle agreeing with Wally. He snapped. “Who cares? Why do you care? About anything?”

Wally stood, clutching his coffee cup. “Our dad just died after like his tenth heart attack, asshole! I care! Why don’t you?”

Ted just stared for a moment, largely because he wasn’t sure how to answer the question. He supposed he did care that his father had just died… but largely because the man had made the next ten years of his life extremely goddamn inconvenient. Otherwise, it was mostly a relief, like the death of a military tyrant to an oppressed city.

Well, that wasn’t a pretty thought.

“Unbelievable.” Wally huffed and brushed past him, heading for the liquor cupboard as well. He smelled like lighter fluid—or just really strong liquor, maybe.

“Jesus, Wally, you stink. You could catch yourself on fire if it got warm in here.”

“Don’t change the subject. You don’t even care he’s dead, and he left you MAC.”

Wally grabbed a bottle of Belle of Dayton and dumped it into his coffee mug. “Like I need another hole in the head.”

“Is that just straight vodka in your mug?” Ted asked.

“Oh fuck you, you’re hungover too and we both know it, so get off the high horse. Have a fucking feeling for once in your life.”


Author Bio:
Katey Hawthorne loves queer romance. Originally from the Appalachian foothills of West Virginia, she currently lives in Ohio with her family, two cats, and two huge puppies. In her spare time, she enjoys travel, comic books, B-movies, loud music, video games, Epiphones, and Bushmills. Her favorite causes include animal rescue and bisexual representation in media. She is an unashamed fangirl and collects nerdy tattoos like she’s trying to prove it.

Comment on any post during the Poor Little Rich Boy blog tour and then head to rafflecopter to enter the giveaway!
http://www.rafflecopter.com/rafl/display/3105535d21/
Posted by Wicked Faerie's Tales and Reviews at 1/08/2021 09:44:00 PM