Title: Business and the Beat

Rutherford Fitzhugh, shy, repressed financial advisor, is happy to stay in his professional and personal rut. But his world gets shaken up when his new boss insists the firm take on more exciting clients and assigns Rutherford to Mak, the brilliant bassist and chief songwriter for the mega-popular rock band, Memo to Myself.

Mak Makana, extroverted prankster goofball, hasn’t had a serious or lengthy relationship in years. He learned early on in his band’s meteoric rise to fame that a lover he’d fallen hard for was more interested in his fame than him.

The sparks between the two men are immediate and intense, despite their disastrous first meeting when Rutherford walks into a gooey prank Mak meant for a bandmate. Rutherford discovers that Mak isn’t the spoiled, shallow rock star he expected, and Mak finds that Rutherford has a hidden artistic and quirky side. They can’t keep their hands off each other—even as they work to convince themselves it’s just a fling.

Rutherford’s never been able to please his conservative, traditional Virginian parents—or get them to accept his sexuality—and the sudden paparazzi attention brings their disapproval on full force. Mak’s got a supportive family back home in Hawaii and another one in his bandmates, neither batting an eye at his pansexuality. But that early experience with a fame-collector makes him wary of opening up to anyone who’s not birth family or band family.

Mak and Rutherford’s very different lives threaten to pull them apart, but could it be they’re different enough to be perfect together?

Business and the Beat
Kellum Jeffries © 2021
All Rights Reserved

Rutherford’s morning started off with a reassuring sameness—same boiled eggs for breakfast, same dogwalk around his neighborhood, same quick skim of the Financial Times during his morning Lyft ride—and there was absolutely no warning that by noon he’d be flustered, turned on, and temporarily dyed blue.

He arrived at work his usual half hour early. It was calm and quiet then, and he had a few peaceful moments to sit with his first cup of tea of the day and start looking through his portfolio of clients, making sure he’d checked in with each of them recently enough to keep them well informed and happy. (This was a tricky balance; some clients were annoyed by frequent contact, some enraged by any lengthy absence of contact, and, of course, there were a few who would find something to be peeved about regardless.)

Rutherford wrote up a schedule of check-in calls to make and started looking through the first client’s current investments, checking on the returns and pondering the fact that said client had a child reaching college age soon. Would tweaking her portfolio in light of that be advantageous? And just when he was settling into deep thought, doodling flowers on his legal pad as his brain ticked over possibilities, Hurricane Jen blew into the office.

He winced—he liked Jen, somewhat reluctantly, but she was loud.

“Heeeeeeeeeey you!” she bellowed, and he sighed as his mental train of morning productivity not only derailed but fell spectacularly off a cliff, hit bottom, and caught fire.

He’d wondered, the first few times she greeted him with a “Hey you,” if she was being intentionally rude to him since she seemed to remember everyone else’s name. But when he’d reintroduced himself after several weeks of this, she’d wrinkled her nose and said, “I swear I know your name, I’m sorry, I just— It just doesn’t seem like you! It’s so stuffy! Sorry, I don’t mean to insult your name, you probably love your name, and it’s certainly elegant and everything, and argh, I’m a dick.”

He’d blinked at her, astonished she thought his name too stuffy for him—he was well aware most people thought of him as, well, stuffy. (He was also astonished she felt comfortable blurting “I’m a dick” by way of apology, but the boss’s daughter had certain prerogatives.)

Today, though, in addition to completely ruining his concentration, she was making him nervous. She didn’t come into the office all that often; she was in charge of schmoozing prospective clients, which kept her on the road a good deal. When she did come in, it tended to be for all-hands-on-deck things: staff trainings and the like. Rutherford snuck a look at his online calendar, but he knew before he checked there was nothing like that today. So why was she here?

“What brings you here today?” he asked, but she added to his worry by grinning and making a lock-turning gesture in front of her lips, then striding off to her dad’s office.

“Oh god,” Rutherford murmured to his computer screen. There’d been rumors flying around lately about the old man’s retirement. Rutherford had tried to discount them, but…he wasn’t so sure now.

MacKenzie from the next office stuck her head in his doorway, pointed the way Jen had gone, and did some frantic gestures he assumed were mime for “what is happening?” He shrugged, and she frowned and popped back out again.

He slid down in his chair, put his hands over his face, and whispered, “I hate change” into the dark of his palms.

And sure enough, a few seconds later, an “Everyone to the meeting room” alert popped up on the office IM.

Rutherford grabbed a pad and pen and headed for the hallway; bad news was always a bit more palatable when he had some paper to cling to. He met MacKenzie on the way, leaned down, and murmured, “Two pencils,” in her ear.

“Crap, thanks,” she said and grabbed the pencils out of her short Afro. Sometimes by the end of the day, she had five or six.

They reached the meeting room and grabbed seats. And once everyone had filed in, Jen patted her dad’s shoulder and said, “Don’t leave ’em hanging,” and Rutherford barely managed not to groan aloud.

Mr. Wozniak stood up, said, “Yep, I’m retiring. Nope, we’re not letting anybody go. Yep, I am going to do a shitload of fly-fishing,” and sat down.

The room was silent for a moment, awkwardly so—what did one say in response to that? And then Jen stood up and talked about how her father had founded the firm on the principles of emphasizing ethics, hiring the best people, and treating them very well. How their employee retention rate (“and our long tradition of not getting caught up in hideous scandals!”) proved these principles worked, and how she planned to continue on the same path.

Oh, good, it was going to be Jen. Rutherford had worried the firm would be sold. Jen, while noisy, was at least familiar and liked.

He’d begun to relax a little when Jen’s speech took a turn.

“While most of you will keep your same client load, I do plan to shake things up a bit. I’m planning to start pitching clients in the entertainment industry—we’ve got a longstanding industry halo for ethical business, let’s add a little buzz as well.”

That certainly got a buzz going in the room at least, but she held up a hand. “I’ll share details with those of y’all who are gonna be involved. Meanwhile, let’s start planning a massive retirement party.”

Rutherford tuned out for the rest of the talk, sketching tiny birds in the margins of his legal pad while he mulled over what this might mean for him. He had every intention of staying. Surely, his job wouldn’t change significantly since there was zero reason for Jen to drag him, of all people, into the new “entertainment industry” focus. However, someone his own age taking over the company would certainly send his parents into another “We can’t believe you’re happy with this career…plateau” rant.

He sighed and then startled, realizing only when Jen’s hand landed lightly on his shoulder that people were starting to clear out of the room. 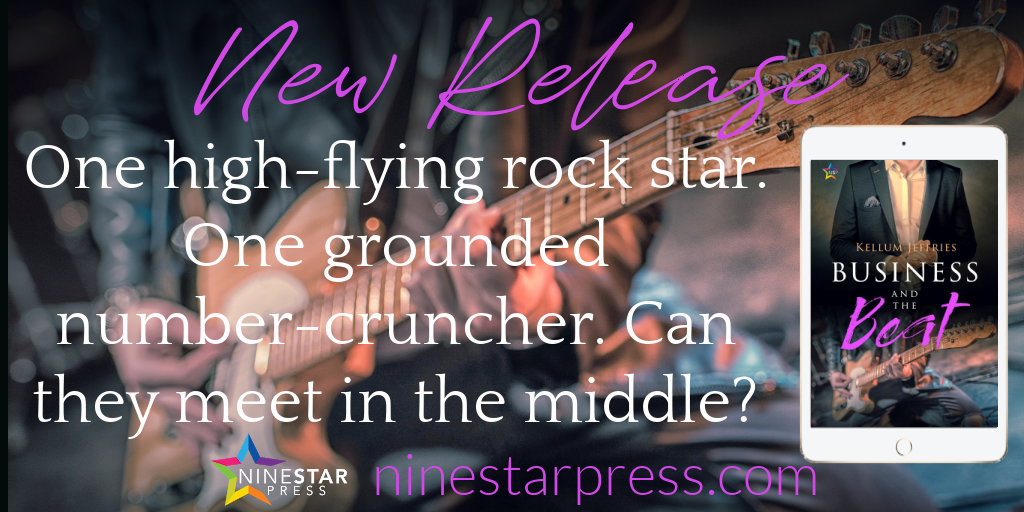 Kellum Jeffries is a bisexual Southern librarian, lucky enough to have a supportive fellow-writer partner and a fabulous dog. She knits socks, gives excellent shoulder rubs, and can touch her nose with her tongue. She loves to write about all kinds of people finding themselves, finding love, and finding the nearest Waffle House.