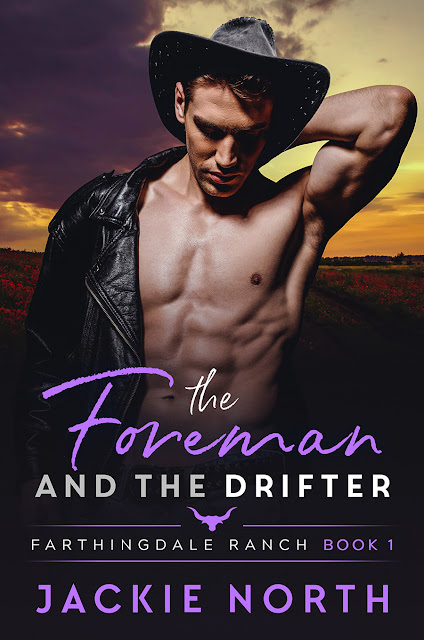 “If only Leland would forget that Jamie was a drifter. If only he’d give their hearts a chance.”

With Farthingdale Ranch at risk, Leland Tate, ranch manager, has to get tough and make sure everyone on the ranch follows the rules he’s laid out. That means no handouts, no fraternizing, and no drifters.

Available on Amazon; in KU

Excerpt - The Foreman and the Drifter

“I don’t know anything about cows except how to cut them up,” said Jamie, his own nature pushing at him to be terribly, terribly honest, as it usually did. This typically had proven itself to not be a very good idea of late, except here, it seemed to the exact right thing. “I worked at a meat packing plant and there was this guy who came in—” Jamie paused before blurting out that the guy reminded him a whole lot of Leland. “He talked about grass-fed cattle and how they should be slaughtered, sort of out of respect for the animal, and it was so different from what I was doing—”

“That you came away with the idea of working on a ranch.” Leland nodded, and he was watching Jamie as though listening, really listening, to every single word he was saying.

“Yeah,” said Jamie, swallowing a sudden jangle of nerves. “Only I thought you were a cattle ranch, and not a—whatever the guy at the Rusty Nail called it.”

“Right, a dude ranch.” Laughing a little bit, Jamie felt his nervousness start to fade away. “He doesn’t like them.”

“I don’t know anything about horses, though.” Jamie couldn’t lie about that either.

Jamie looked at the horse Leland was riding, at her long horsey lashes and the soft leather strap across her nose, and the way she blinked and sighed, as if tired of their chatter and wanting to get a move on. Then Jamie looked up, right into Leland’s eyes. Just as he was thinking about what he needed to say right then, the horse took a step forward and bumped her nose against his belly, as though she wanted him to pet her.

“Well, I’d say you know more than you think,” said Leland. “She likes you, anyhow, and that stands for something with me. So what do you say?”

“I say yes,” said Jamie before he could second-guess himself and probably walk away from the best offer he’d had in a long time. He watched while Leland pulled on the horse’s reins and seemed to gather the animal beneath him. “Guess I’ll see you at the ranch, then,” Jamie said, petting the horse’s nose as he shifted his duffle bag on his shoulder and thought about how long it would be before the stones in the road cut into his foot.

“I’ll give you a ride, Jamie; you don’t have to walk.” Leland leaned forward and patted the horse’s neck. The leather of the saddle creaked slightly. “Gwen can carry double that far, for sure.”

When Jamie tried to imagine how he would get on top of an animal that suddenly looked very tall, Leland took his booted foot out of the stirrup, and held out his hand.

“Give me your duffle, then I’ll help you up.”

Jamie handed over his duffle bag and watched as Leland slung it around the saddle horn so it dangled on the other side of the horse. Then he held out his hand. It was obvious he meant Jamie to take it, so he did, a little shocked at the warm strength of it, the callouses. He put his left foot in the now-empty stirrup, wincing a bit at the stretch in his thighs, and let himself be pulled up.

For a wild second, he wasn’t sure where he was supposed to land, and felt he was going to get astride the horse only to fall off on the other side. But Leland didn’t let go of him, and Jamie was able to settle himself on Gwen’s back, right behind the saddle, half on the saddle blanket, half off.

He was quite close to Leland’s back, even before Gwen shifted into action. When she moved, his entire body moved forward, banging into Leland. He could smell the day’s sweat on Leland, the trace of soap from an earlier shower. He had to grab onto Leland’s waist to keep from falling off as Gwen trotted to the gate, and then he had to let go again as Leland leaned down to unlock the gate.

Leland made a clucking noise and shifted sideways as he straightened up, and Gwen suddenly moved beneath him. Flailing, Jamie’s hands landed on Leland’s thighs, both of them, and he scrambled to sit back, his hands slipping on Leland’s blue jeans, which were warm from the sun, and warm from the taut muscle beneath.

“Easy now,” said Leland. “Let’s get through and I’ll shut the gate. Then Gwen’ll just be walking and it won’t seem so unsteady.”

“Okay,” said Jamie, though it really wasn’t okay at all. He couldn’t seem to let go of Leland’s waist, and couldn’t seem to draw a single breath that didn’t carry with it the scent of Leland’s skin, the dash of faded shaving cologne, couldn’t move a single inch without feeling Leland’s strong muscles shifting beneath his touch. It was almost too much, almost enough to make him want to jump off then and there, to land in the road all shaking and confusion.

Just then, as if she wanted to cover the distance between the gate and the shady glade before the stone bridge, Gwen burst into a small canter. Inside of a quick minute, they were in the cool gloom of the glade with the spray of water from the tumbling river blowing up at them. Jamie whooshed out a breath as Leland reached back to pat his knee.

“She just wants to get back to the stable, is all,” said Leland in that same calm voice he’d used with Monica. “This your first time on horseback, I gather.”

“Yes, it is.” Jamie tried to unclench his hands from where they were gripping the front of Leland’s shirt, and he figured Leland would be mad about it, but Leland patted his hands and clucked to Gwen.

Jackie North has been writing stories since grade school and spent years absorbing the mainstream romances that she found at her local grocery store. Her dream was to someday leave her corporate day job behind and travel the world. She also wanted to put her English degree to good use and write romance novels, because for years she’s had a never-ending movie of made-up love stories in her head that simply wouldn’t leave her alone.

As fate would have it, she discovered m/m romance and decided that men falling in love with other men was exactly what she wanted to write books about. In this dazzling new world, she turned her grocery-store romance ideas around and is now putting them to paper as fast as her fingers can type. She creates characters who are a bit flawed and broken, who find themselves on the edge of society, and maybe a few who are a little bit lost, but who all deserve a happily ever after. (And she makes sure they get it!)

She likes long walks on the beach, the smell of lavender and rainstorms, and enjoys sleeping in on snowy mornings. She is especially fond of pizza and beer and, when time allows, long road trips with soda fountain drinks and rock and roll music. In her heart, there is peace to be found everywhere, but since in the real world this isn’t always true, Jackie writes for love.