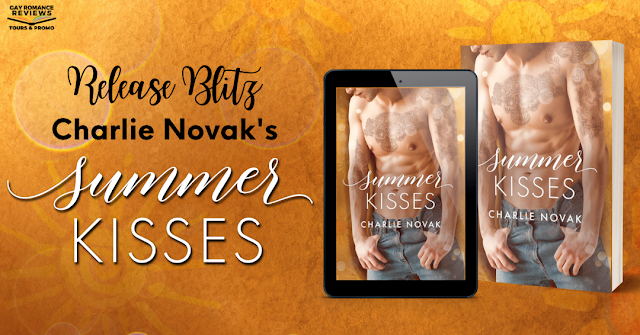 Two chefs. Two summers. One shot at a second chance.

Aaron’s Plan
Then:
Get a better job
Learn more skills
Get money for restaurant
Don’t fall in love with Josh

Josh’s Plan
Then:
Start new job
Try not to burn out
Don’t fall in love with Aaron
Seriously. Don’t. It will only end badly…

Summer Kisses is a 78,000-word contemporary MM romance featuring two chefs with a complicated history, clashing egos, cheese toasties, and two summers that will change everything. It is part of the Kiss Me series and can be read as a standalone.

Content Warning: This novel contains mentions of drug use and issues of alcohol abuse.

“Okay,” I said, sliding onto the plastic bench as Aaron played with the console to input our names. “I know what we should bet.”

“Well, we’re here for three games, right? So I feel like there has to be a prize for each game and a grand prize. And maybe mini prizes… or forfeits.”

“That sounds fair,” Aaron said, looking through the row of balls and testing them. “If I win a game, you have to do whatever I want for a night. And if I win overall,”—he thought for a second, his grin widening—“you have to admit, in public, that I’m the best chef you’ve ever worked with.”

I laughed. “Seriously? Okay, well if I win one game, you have to fuck me however I want. And if I win two or more games, then you have to let me fuck you.” Aaron’s eyes went wide, but he didn’t automatically object. That was interesting. He’d never bottomed for me before, and now I wanted a go at his ass more than anything. But that wasn’t all I wanted. “And if I win overall, then you have to admit, in public, in front of people—in fact, you have to do it in the middle of the next Sunday lunch service we’re both on—that I’m the best chef you’ve ever worked with and that you’d be lost without me.”

Aaron stared, then he burst out laughing. The sound was rich and loud, and it filled my heart with such joy I thought I might burst. “Oh, it’s fucking on,” he said, picking up a bright yellow ball. I saw fiery determination burning in his eyes. “And one more thing. Every time you get a gutter ball, you have to give me a blow job. Because clearly you suck, so you might as well put that skill to better use.”

I snorted. “Fine. But you have to do the same for me. Now stop putting off your inevitable loss and bowl.”

To celebrate the release of Summer Kisses, Charlie is giving  you a chance to win an e-set of the Kiss Me Series so far (2 ebooks; Summer Kisses and Strawberry Kisses)!

Charlie lives in England with her husband and a dachshund named Biscuit. She spends most of her days wrangling other people’s words in her day job and then trying to force her own onto the page in the evening.

She loves cute stories with a healthy dollop of fluff, plenty of delicious sex, and happily ever afters — because the world needs more of them. Charlie also believes that loves comes in all shapes and sizes.

Charlie has very little spare time, but what she does have she fills with cooking, pole-dancing, reading and ice-hockey. She also thinks that everyone should have at least one favourite dinosaur…