Blue Moon 3: Call of the Alpha by A.E. Via - Blog Tour with Excerpt and Giveaway 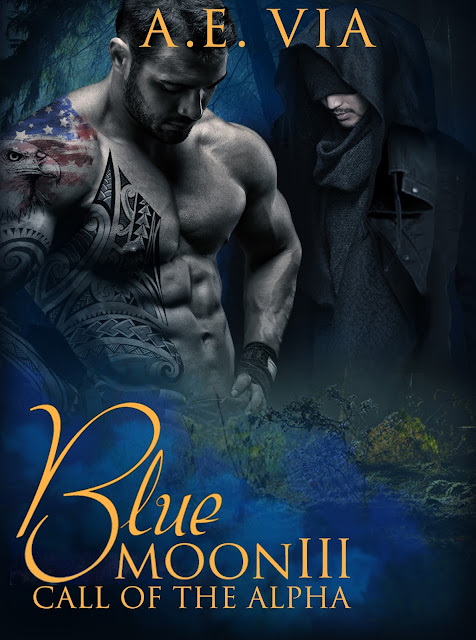 THIS IS THE THIRD INSTALLMENT IN THIS SERIES and CAN STAND ALONE.
The Story of  ALPHA, CALL, OMEGA & LION ALONG WITH A COUPLE OTHER FAVORITES

It’s been a couple years since Commander John Marion – the US Navy’s most decorated SEAL – hung up his dog tags, choosing his cherished Alpha over war.

Call and Alpha have settled comfortably into their carefree lives nestled in the mountains of South Carolina. No more combat for the Commander and no more ordered killings for the deadliest assassin in the world.

However, nothing stays peaceful forever.

When Alpha’s brother Omega comes to their secluded home with a distressing message from their Order, Alpha has to answer the call.  But what neither of them expect is for the Order to send them a new assassin, one just as deadly as both of them, to seek their counsel and bring them back Persia.

Lion’s commanding presence was not at all what any of them anticipated. Especially Omega. Lion realizes what Omega is to him right away, but the stubborn man fights his every advance. Lion knows he and Omega have to connect if they’re going to be victorious. He was sent to bring back an army but if he can’t get his cherished to yield to him, they are sure to fail.

Call refuses to let Alpha fight a gang of rebel assassins without him. Omega will fight by his brother’s side, no matter what… and Hawk saw them coming for his help before anyone else. Together they’ll fight the toughest opponents they’ve ever faced. As always… these badass warriors are up for the challenge.

This book ends in an HEA and does not end in a Cliffhanger. This book contains graphic violence 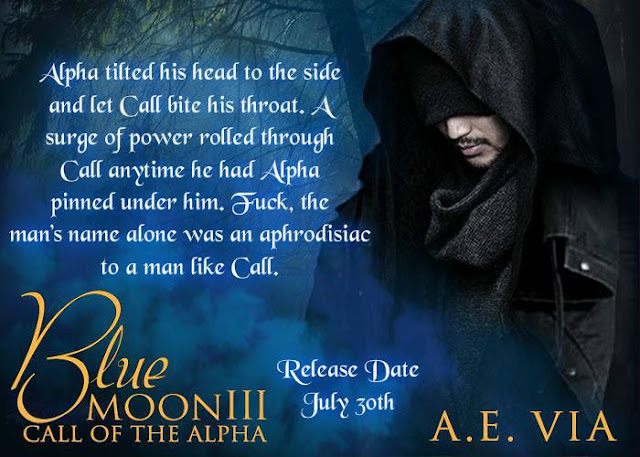 Alpha stood and began kicking dirt onto his fire to put it out. He finally looked up and met Call’s eyes. He knew his partner, knew what his eyes were saying. He was asking if they were good. Was Call ready for him to come home? Did he still feel shame?

Call didn’t care if Alpha’s brother was watching or not. The bastard was there uninvited anyway and he’d just happened to arrive at a sensitive time. Call moved into Alpha’s space and brought one hand up to the back of his head, the other securing a firm grip on his throat. Alpha’s already dark eyes hooded with lust. He even raised his chin a little higher, letting Call get a deeper grip. Alpha reveled in Call’s strength. It turned him on to the highest degree. Call pushed him back against the tree and slammed his mouth over those soft lips. Alpha gasped out a relieved breath and let Call take whatever he wanted. He tightened his palm over Alpha’s jugular, making him hiss at the pain. “Don’t walk out again,” Call snarled against Alpha’s lips.

“Don’t give me a reason,” Alpha barely whispered, since his throat was in a vise grip. He held Call’s waist with one hand, pushing his erection against his own, and held the wrist of the hand Call had around his throat, moaning his desire. “Tighter.”

Call closed his eyes and the let the craving flood through him. He squeezed Alpha tighter while grounding his cock harder against him. It wasn’t nearly enough contact. He needed his love right now, needed his submission and Call knew Alpha needed his dominance. Call popped the button on Alpha’s jeans and roughly reached inside, searching out his heat.

“Um. Should I like wait over there or something?” The exasperated voice of their uninvited intruder broke through their lust.

Call loosened his grip and rested his face in the crook of Alpha’s neck. His natural scent always calmed him, and he needed it right now because he was two seconds off Omega’s ass. As if Alpha could sense his inner anger, he rubbed soft circles at the base of Call’s back and kissed him lightly behind his ear, whispering soothing French words to him.

“I need to be alone with you,” Call grumbled, sucking hard on Alpha’s neck. His chest rising and falling rapidly.

“I know. But he has something to talk to us about.”

“Us?” Call questioned. He slowly pulled Alpha’s cap off his head and threading his fingers through his thick hair. Again, forgetting their audience. He was beginning to think he may have a slight obsession with his assassin. He nestled his nose into the still-wet locks and took another breath.

“Come on. Let’s go home.” Alpha had to practically pry Call’s hands off him. Murmuring promises to him. “Later, mon amour.”

Omega was standing several feet away and Call stormed past him, heading back in the direction of their home. He heard the brothers walking behind him, only catching bits and pieces of their conversation in their native tongue. He did, however, clearly understand one sentence. “I’ve never seen anyone handle you that way and live, brother.” Call couldn’t help but smile at that. He liked that no one had or would ever touch Alpha that way – and live – but him. 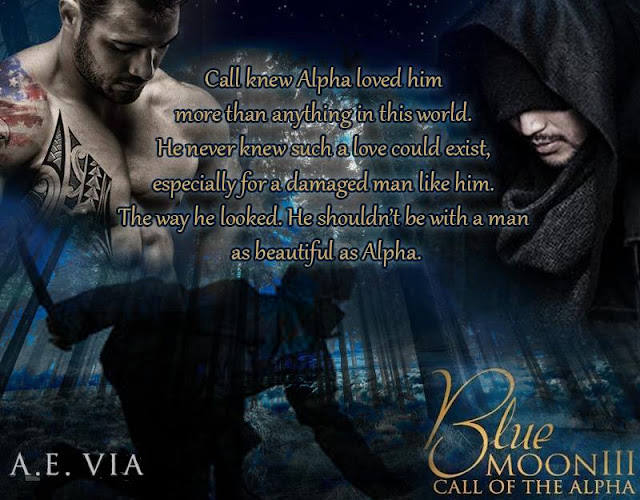 A.E. Via is an author in the beautiful gay romance genre and also founder and owner of Via Star Wings Books. Her writing embodies everything from hopelessly romantic to adventure, to scandalous. Her stories often include intriguing edges and twists that take readers to new, thought-provoking depths.

When she’s not clicking away at her laptop, she devotes herself to her family—a husband and four children. Adrienne Via has tons of more stories to tell, but she really would like to hear yours. Via Star Wings Books is currently accepting submissions for established and aspiring LGBTQ authors.

Visit my site to learn more! Go to A.E. Via’s official website http://authoraevia.com  for more detailed information on how to contact her, follow her, or a sneak peak on upcoming work, free reads, VSWB submissions, and where she’ll appear next