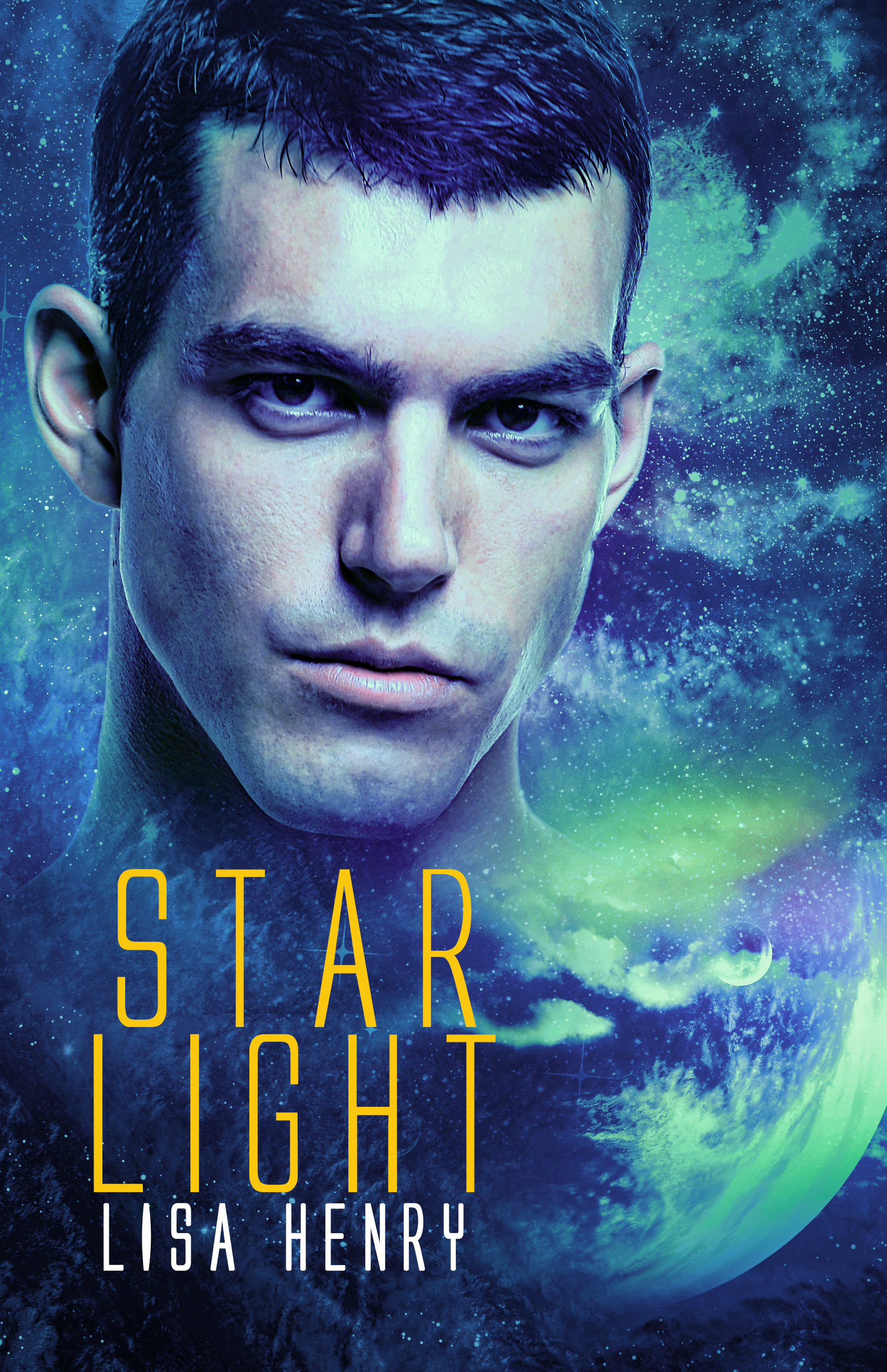 Brady Garrett is back in space, this time as an unwilling member of a team of humans seeking to study the alien Faceless and their technology. It’s not the first time Brady’s life has been in the hands of the Faceless leader Kai-Ren, and if there’s one thing Brady hates it’s being reminded exactly how powerless he is. Although dealing with the enigmatic Faceless might actually be easier than trying to figure out where he stands with the other humans on board, particularly when one of them is his boyfriend’s ex.

Cameron Rushton loved the starlight once, but being back on board the Faceless ship forces him to confront the memories of the time he was captured by Kai-Ren, and exactly how much of what was done to him that he can no longer rationalize away. Cam is used to being Brady’s rock, but this time it might be him who needs Brady’s support.

This time Brady is surrounded by the people he loves most in the universe, but that only means their lives are in danger too. And when Kai-Ren’s fascination with humanity threatens the foundations of Faceless society, Brady and Cam and the rest of the team find themselves thrust into a battle that humans have very little hope of winning, let alone surviving.

*Starlight can be read as a standalone but probably words better with knowledge of the first two books in the series. 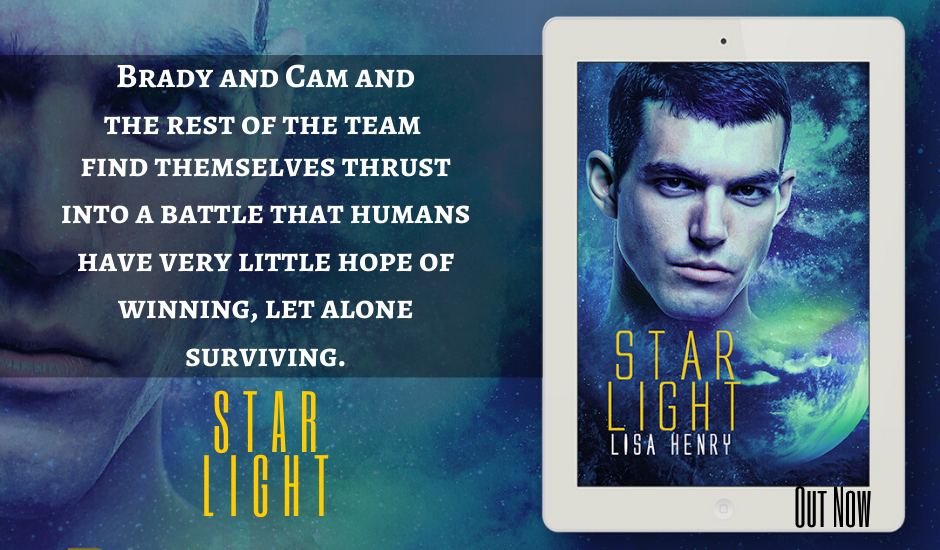 The Faceless ship was silent, but the anger and the adrenaline rush of the battle ran on a constant feedback loop in our skulls. Spikes of pain, of fear, were like blasts of static in our heads. And sometimes, more than once, we felt that same dizzying sensation of sudden loss—and of that hole immediately being filled in again. The Faceless felt no grief for the fallen. The hive barely even noticed the loss of one drone.
I thought of my dad and how acutely I still missed him and how his loss was written in my bones, and in everything I did. A day didn’t go by when I didn’t think of him. And I thought of how my grief and my fear for Lucy had captured Kai-Ren’s attention in the first place.
I wondered which one of us was the most incomprehensible to the other. The most alien.
We made our way carefully down toward the core of the ship. Everything seemed dimmer. There were fewer lights drifting in the walls, and the fluid itself seemed darker than usual. The ship was hurt. Was she dying too?
Chris and Doc carried the hybrid between them, his thin arms held across their shoulders. His pale feet dragged more than stepped, but his eyes were open now. They were dark and wide and fearful, just like mine.
Cam and Harry led the way, and Andre and I brought up the rear. I held Lucy’s hand tightly. It was warm and damp with sweat. She was quiet. Her face was pinched. But she didn’t even stumble as we moved forward through the dimly-lit curving passageway of the ship.
As we moved toward the fighting.
“If anything happens,” I whispered to her, “run back to where we just were, okay?”
She nodded, and squeezed my hand more tightly.
We kept moving, right up until we didn’t. Cam and Harry had stopped, and I craned my head to see.
“It’s okay,” Cam said. “Keep moving.”
There was a dead Faceless lying in the corridor. His mask had been removed. His eyes were covered in a white film. His yellowish skin was stained black around his throat, and over one cheek, like someone had spat ink over him. And then I realized that no, it wasn’t a stain. It was necrosis, or something like it. His skin had been ruptured in several places, punctured, and the flesh around it had turned black.
Venom. It had to be venom.
I looked at Doc and Chris, and at the way the hybrid was slung between them. The hybrid’s fingers curled around their shoulders, and I thought of claws digging into their flesh and wondered how long it would take Faceless venom to kill a human. And then I thought of every time that Kai-Ren had run his hands over my skin, and of how the Stranger had prodded my stomach, and how each time I’d been staring death in the face. I’d thought of Kai-Ren as a god once, hadn’t I? A god who could strike any one of us down on a whim.
I held Lucy’s hand tightly as we passed the dead Faceless.
There was a voice in the back of my head—mine, for once—that told me we weren’t going to make it to the pods. That told me we’d be caught here, in a curving corridor with nowhere to take cover and that the Stranger’s Faceless would kill us, but whatever was happening in the rest of the ship was keeping all the Faceless busy.
My heart was beating out of my chest by the time we descended to the bay where the pods were kept, and the doors shut behind us, the sticky seams sealing closed.
There were six pods here, and seven of us plus the hybrid. It didn’t matter, because Cam and I had shared a pod before anyway. There was plenty of room. But mostly it didn’t matter because we had no way of getting the pods to work, let alone launching them.
And then it really didn’t matter, because we wouldn’t be launching them into some tranquil sea anyway.
“Holy fuck!” Harry exclaimed from the one of the windows that looked out into the nebula.
I look past him just in time to see a Faceless ship being torn apart by a massive explosion. It was colossal. It was blinding.


And it was close enough that the shockwave hit us like a tsunami.

Thank you so much for inviting me here today to talk about my newest release, Starlight, which is the third book in the Dark Space series. If you’re not familiar with the series, here’s a little bit about the world it’s set in.

The Dark Space series is set at some indeterminate point in the future, when the world looks very different than it does today. They are no countries, only administrative districts. There are also no remaining major cities, because when the alien Faceless attacked they only left the smaller places standing. But, in my mind at least, both Brady and Cam are Australian characters. And I’m sure this might actually be surprising to a few readers, because it never comes up since it’s completely irrelevant. There are hints, though.

Brady comes from Kopa—a refugee township that doesn’t exist (and hopefully never will, it sounds awful!). But in my mind, Kopa with its red dirt and its rusted crocodile traps and its cockatoos and its bauxite mines, is very much Weipa, on Australia’s Cape York. When Brady talks about the Gulf, he’s referring to the Gulf of Carpentaria. It’s a singular sort of country up there. It’s harsh, and it’s either flooding or its in drought.

In Starlight, Brady sees the strange structures inside the Faceless ship he and the others are on, and he thinks of banyan trees. It’s the only way Brady knows to describe his alien surroundings, but it’s a double-edged sword because of his homesickness:

Back home in Kopa, by the creek, there had been a bunch of massive Moreton Bay fig trees, or banyans. Each tree grew outward, dropping roots down from their branches in tendrils, their insides hollowing out as they expanded. Some of the old people used to tell stories handed down to them about how before Kopa had been a township—before it had been much of anything at all—when cyclones swept in from the sea the people used to shelter inside the banyans, hidden in the hollows, crouching there as the storm outside raged. We used to play in those empty spaces when I was a kid. It was dark and cool inside, with spots of dappled sunlight on the dirt floor where the light filtered through the twisted mesh of the buttress roots.

A banyan is a type of strangler fig. It geminates on an existing tree, and sends it roots dropping to the ground as it grows outward. Eventually, the host tree dies leaving a hollow inside. Banyans aren’t native only to Australia—it is the national tree of India, for example—but they are certainly predominant in the gulf country, and throughout much of Queensland. And the story I heard about people sheltering in them during cyclones, I heard in Vanuatu.

So if Brady is from northwest Queensland, Cam is from the southeast coast—Coolangatta maybe—and just like now, these two parts of the state could not be any more different. Cam is a citizen, and comes from a privileged background. The things he takes for granted—education, a career, self-determination—are incomprehensible to a refugee like Brady. In the Dark Space series, all of humanity is not equal.

So while Brady and Cam do share certain cultural touchstones, and an accent, they’re more different than alike. Brady has red dirt and mangroves and mudflats in his blood. He’s been very much shaped by a landscape that’s foreign even to Cam, and like always Brady both resents and clings to the things that make him different. In Starlight he’s still trying to reconcile those two very different emotions, because even if the Faceless have taken the boy out of Kopa, they can’t ever take Kopa out of the boy.

Lisa likes to tell stories, mostly with hot guys and happily ever afters.
Lisa lives in tropical North Queensland, Australia. She doesn't know why, because she hates the heat, but she suspects she's too lazy to move. She spends half her time slaving away as a government minion, and the other half plotting her escape.

She attended university at sixteen, not because she was a child prodigy or anything, but because of a mix-up between international school systems early in life. She studied History and English, neither of them very thoroughly.

She shares her house with too many cats, a dog, a green tree frog that swims in the toilet, and as many possums as can break in every night. This is not how she imagined life as a grown-up.
Lisa has been published since 2012, and was a LAMBDA finalist for her quirky, awkward coming-of-age romance Adulting 101.