Title: The Prince and the Pencil Pusher 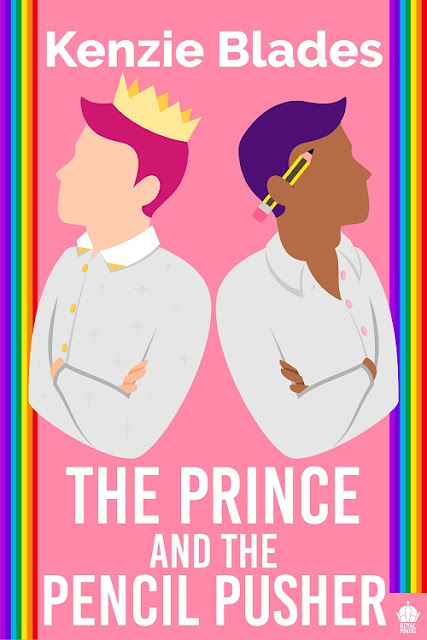 Bad things happen when supos go unchecked. That's why Abarra needs The Ministry: to keep tabs on royals with powers run amok. Queen Maialen has entrusted the safety of her subjects to her nephew, Prince Xabier, placing the agency in his capable hands.

Only, the Prince would rather spend his days putting his own power to good use in the vineyards than to wither away on the bureaucratic vine. Tired of policing perpetrators and babysitting bean-counters, he schemes to groom his first lieutenant (and second cousin) the Duke of Shrubs. After months spent moving chess pieces, he is poised to convince the Queen to assign his cousin to his post.

But an unlikely pawn still stands in his way: the sexy Zain Otxoa is the pushiest pencil-pusher in all of The Ministry and head of internal affairs. Prince Xabier has plotted to have him fired at least thrice. Zain's influence over the Queen—his only saving grace—is baffling.

When a master maneuver to have Zain reassigned exposes a shocking imbroglio, Prince Xabier learns The Ministry isn't what it seems. And Zain isn't a pawn at all.

We had taken to coming out to the pool at night. Dinner had proven insufficient to contain our conversations. Xabier had questions—dozens of questions—for me. I chalked it up to the sum of all that had changed. He was adjusting. Reorienting himself. Reinterpreting his world during a time when the ground moved beneath him. And I was part of his world—for the time being.

He will break your heart.

I couldn’t help but to think it in the moments in-between, when one of us were speaking; in the moments when his glow was upon me; in the wickedness of his smirks and the deep rumble of his laugh. And increasingly, in the heat of his gaze, something that had always lingered between us was coming to the fore. This situation had given it space.

I had resolved earlier that day not to judge myself for falling for a handsome prince. It seemed practically a rule that one must. I was certain it would be the end of me but did not resist what could no longer be kept at bay. It explained why I had allowed myself to lie by the pool on the back deck of our cottage, feet bare and legs dangling into the water, as the Prince and I shared a bottle of after-dinner wine.

His voice was deep and his question was a non-sequitur. Minutes earlier, we had been discussing the stars. They shone brighter than they ever did in the city. Xabier had poured us one more glass of port and listened with quiet patience as I’d told him about a time in the States when I’d seen an epic meteor shower.

“Are we or aren’t we what?” He got philosophical, the more he drank. This could be an existential question.

“I suppose that I am still the Minister of Powers. So, I guess what I’m wondering is…are you still my employee?”

It was too dark for him to see me make a sweeping motion with my arm, which is exactly what I did before proclaiming, “We all are.”

“It poses some difficulty,” the Prince remarked, “when the vast majority of the people I meet are subordinated to me in some way. It’s one of the unadvertised benefits of being third in line to the throne. It makes forging friendships—and anything else—rather complicated.”

Between the food and the wine, Xabier’s suggestion sounded like one of the most preposterous things I had ever heard. I chuckled heartily.

“I am the thorniest thorn in your side. And you want to be friends?”

I thought it was hilarious, but I stifled my laughter when I could see he was beginning to look a bit offended.

Before I could react, he moved the bottle and the glasses, propped himself up on his elbow and rolled over on his left side, peering down at me and not looking intoxicated in the slightest. I wondered absently whether his power made it so that he couldn’t get drunk, like starting off as some sort of wine god had made him immune. I was too buzzed to do the mental math so defaulted to the conclusion that it didn’t make much sense.

“You’re beautiful,” he whispered, and the way he said it, I knew he meant it deeply. “I’ve wanted to tell you before. And since I’m fairly certain you don’t work for me anymore, I thought it might be time.”

“I was only tricking you into thinking I worked for you. I was under the orders of Queen Maialen all along. Technically, she is my boss.”

“Even better,” he whispered. “Then I won’t feel an ounce of creepy guilt for doing this.”

He put his warm hand on my shoulder for the briefest of seconds before sliding it to my neck and palming the back of my head in his hand. He stroked the tip of his nose with mine before capturing my lips in a kiss. I’d been told that mine were luscious, which I had never fully understood or appreciated as a compliment until the moment that I tasted his.

His lips were soft, but his kiss was hungry, slow but urgent all at once, deep and fixating, as if I couldn’t pull away. It drew me out of myself and into myself and upside down and inside out, and with every passing instant, much closer to him.

We both made sounds, I thought. Only, I couldn’t really think, and it could be that the muffled moans existed only in my mind. The blood flow in my brain could not have been adequate for as quickly as most of it had gone rushing to my groin. Kissing the Prince was sexy as hell.

“Zain,” he whispered as he pulled away.

I had just had some sort of kiss-gasm. I knew that wasn’t a thing. Only, kissing Xabier, it was—some sort of climax that came at the height of our epic kissing, that left me intoxicated and sated and spent. We kissed once more—long and magnificent—then pulled away again to catch our breath, then recovered quickly, ready to go right back in again.

Somehow, we went from being propped up on elbows to being propped up on hands to practically climbing into each other’s laps as we kissed. I was only peripherally aware of this movement, which fully explained my utter surprise when we landed—fully clothed and clinging to one another—in the pool.

Kenzie Blades is a queer author of romantic LGBTQ+ fiction and is the alter ego of a multi-award winning author who writes other fiction under a different name. Kenzie lives in San Francisco and enjoys lots of things that start with the letter B, like bacon, bourbon and books.