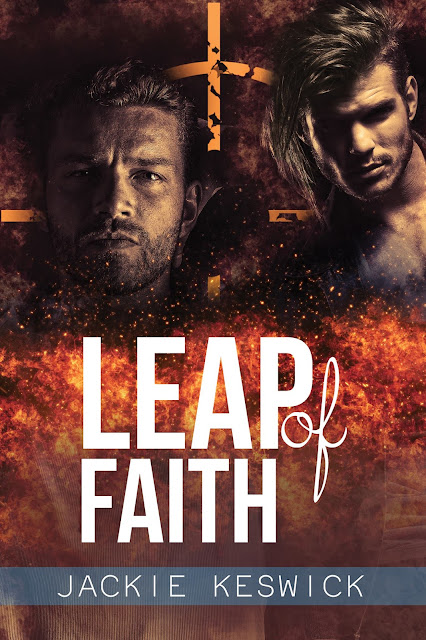 Close friends and partners at FireWorks Security, Joel Weston and Kieran Ross know each other’s strengths and weaknesses. They have each other’s backs, make a formidable team, and carefully ignore their volatile chemistry.

When Kieran struggles with the aftermath of an assignment gone wrong, Joel is there to help. When Joel is caught in an explosion, Kieran jumps into a burning marina to rescue the man who means so much to him. But they never discuss what’s closest to their hearts, not prepared to risk their friendship for the mere possibility of something more.

Faced with bombs, assassins, and old ghosts, Joel and Kieran must find out why they’re targets, who is coming after them, and—most of all—how each would feel if he lost the other. Should they continue as best friends, or is it time to take a leap of faith?

Leap of Faith is the first book in a new contemporary series by author Jackie Keswick. This novella is a romantic suspense in a similar style to the author's other on-going series, The Power of Zero. So if you loved that series as much as I did, this is a must read.

Joel Weston and Kieran Ross have been work partners and close friends ever since Kieran showed up at Fireworks Security. They aren't just close friends, in truth they know each other from start to finish, except for one minor detail, both Kieran and Joel are attracted to each other. They just haven't bothered to share that because neither wants to destroy their friendship. That is until after one mission with an unexpected casualty that shakes both of their lives up. Followed by Joel being injured after attempting to diffuse a hostage situation and being caught in an explosion.

I will freely admit that I devour this author's books in her The Power Of Zeros series. The characters and the storylines are engaging and so very well written that they grab me and don't let go until the final word on the last page.  Leap of Faith was no different! I was hooked from the first page and didn't stop reading until I had finished the book. It has the same pacing and flow that her other series has, along with highly likable, and addictive characters. The dynamic between Joel and Kieran is strong and engaging while it continuously pulls you along for ride that is Leap Of Faith. From the start where they're 'just friends', to Joel being injured and Kieran saving him, to the moment that they realize their attraction is mutual, and all the way to the finale of this story you want to know more about them and stayed glued to your ereader.

I wish the first book in this series had been a full novel vs the novella length because I think there was more that could have been shared in this entree into Joel and Kieran's lives. There is a lot of important information on their histories that is placed throughout the book. I can imagine that there is even more information that will be shared in the following books in the series. Which I highly look forward to the next book in the series because there is a bit of a 'tease' that there is more action to come in the couple's future.

This is a highly recommendable book for anyone who likes a little suspense/thriller with their romance. Also for any previous fans of this author, you will NOT be disappointed with this book. After reading Leap of Faith, if you haven't already, I highly encourage you to read The Power of Zero series that is also ongoing.

Jackie loves unexpected reunions and second chances, and men who don't follow the rules when those rules are stupid. She blogs about English history and food, has a thing for green eyes, and is a great believer in making up soundtracks for everything, including her characters and the cat.