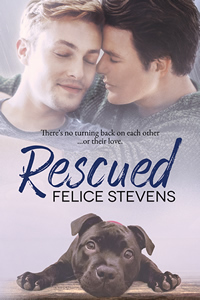 Ryder Daniels is all too familiar with rejection. His parents cut off contact because he’s gay and his boyfriend left him, choosing drugs over love. Aside from his rescued pit bull, his only joy is hanging out with his younger brother. Then his mother does the unthinkable and forbids them to see each other, leaving Ryder devastated and alone. His friends urge him to date, but Ryder would rather throw himself into working at the dog rescue and figuring out a way to see his brother again.

When Jason Mallory’s girlfriend gives him an ultimatum to get married, he shocks everyone by breaking up with her instead. He believes he's too busy for a relationship now that the construction company he started with his brother is taking off. When he discovers a group of abandoned pit bulls and calls the local dog rescue group to pick them up, an uncomfortable encounter with Ryder causes Jason to question feelings he’s hidden deep inside for years.

Jason and Ryder build a friendship, until an unexpected kiss sparks the attraction they’ve been fighting. Jason gives Ryder unconditional love and helps him reconnect with his brother while Ryder shows Jason the passion he’s always missed in relationships. Together they must battle through their family differences and ugly prejudices. Only then can they prove that once you find the right person to love, there’s no turning back. 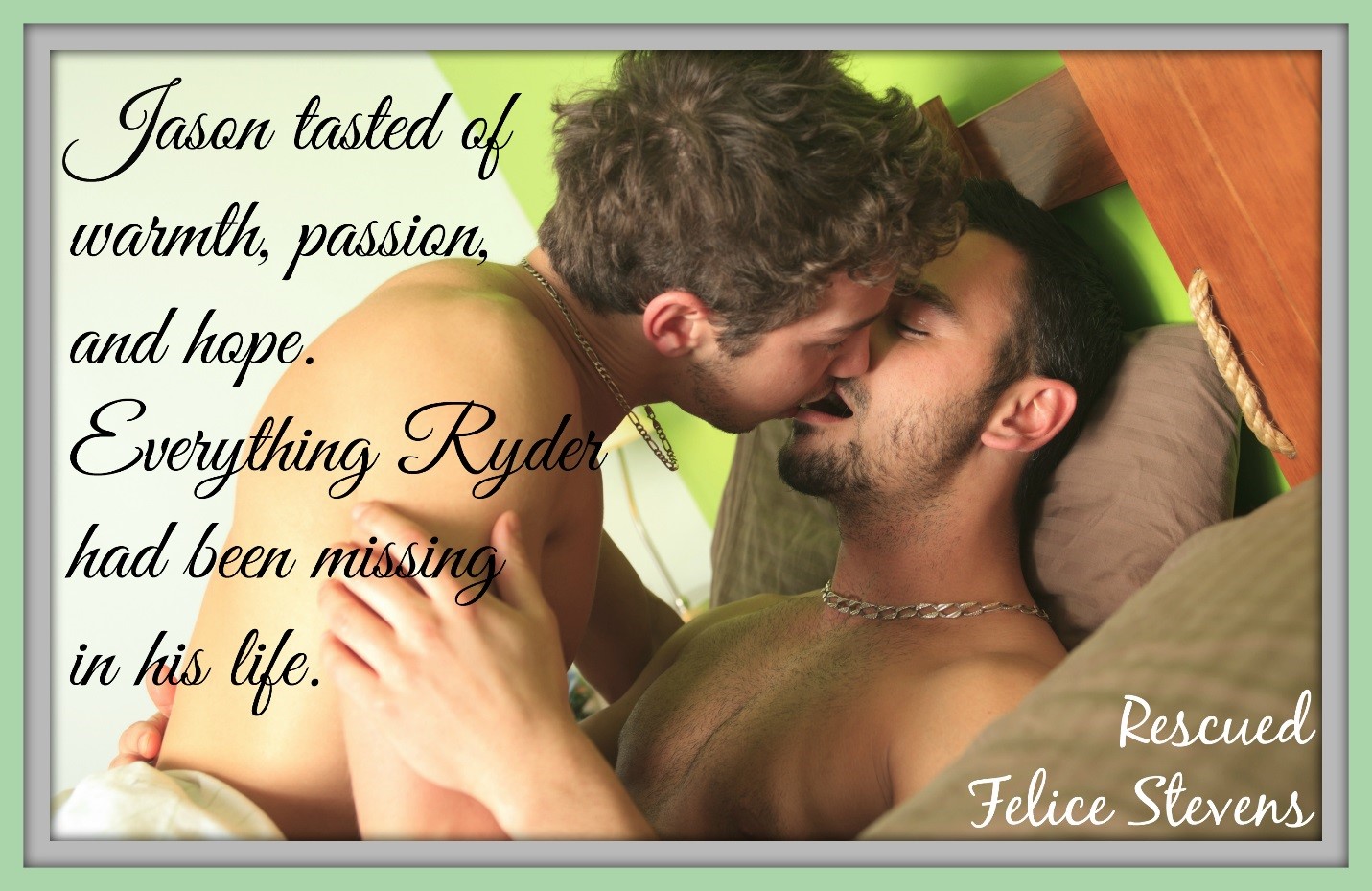 Ryder bent close to him, whispering softly. “Don’t worry. You trust me, don’t you?” Ryder kissed that secret spot behind Jason’s ear, dragging the wet trail of his tongue down Jason’s neck. An ache, sweet yet painful, grew within Jason and he tremble under the pinpricks of nerves running riot through him.

“Do you trust me, Jason?” Held within Ryder’s arms, he peered up into his friend’s face. Trust him? He’d better. This was life-changing for him, like a fucking volcanic eruption of epic proportions. He opened his mouth, but no words came out, so he merely nodded. Shivers racked him as Ryder tucked him closer into his hard chest.

A warm palm cupped his face, the thumb stroking his cheek. Jason was one step away from breaking down and falling apart in Ryder’s arms. Another shiver rolled through him.

“Hey, listen to me. Relax. I won’t do anything you don’t want me to,” Ryder murmured, calm and strong, one hand caressing Jason’s face, the other circling his back with soothing strokes.

What did he want? He had no fucking clue. Now that the time was here, with Ryder standing before him so open and honest, he had to be honest with himself. He licked his dry lips, suddenly shaky with nerves that popped up all over the place. “I don’t know what I’m supposed to do or, um...”

Helplessness was not a feeling he normally experienced. He was used to being in control, giving orders. But here, he was in so over his head he was completely lost. He was hurtling down a runaway rollercoaster without a seat belt. Death defying and dizzying.

“Shh. I’ll take care of you.” Ryder smoothed back his hair. “I love your hair.” He dragged his fingers against Jason’s scalp, tugging at the curls. “So damn soft and beautiful. Do you know the first time I saw you, I wanted to grab you by it and kiss your gorgeous mouth?”

Jason groaned and pressed himself against Ryder. “Do it now, then.” He grabbed Ryder around his neck. “Kiss me. I can’t fucking stand it anymore.”

Ryder pushed him down on the bed, caging him between his arms. “Don’t you want me to touch you?” Their lips touched, and Jason bit back a moan as he arched his body .

“God yes,” he ground out, frantic to keep Ryder’s lips on his. But Ryder seemed content to tease him with tantalizing, soft kisses.

“Where do you want me to touch you?” Ryder’s warm breath kissed his throat. “Here?” Ryder kissed Jason’s collarbone, working his way across Jason’s neck, nipping and sucking.
“I’m going to mark you, let everyone know this is mine.” Ryder bit down on his shoulder, sucking the skin into his mouth. 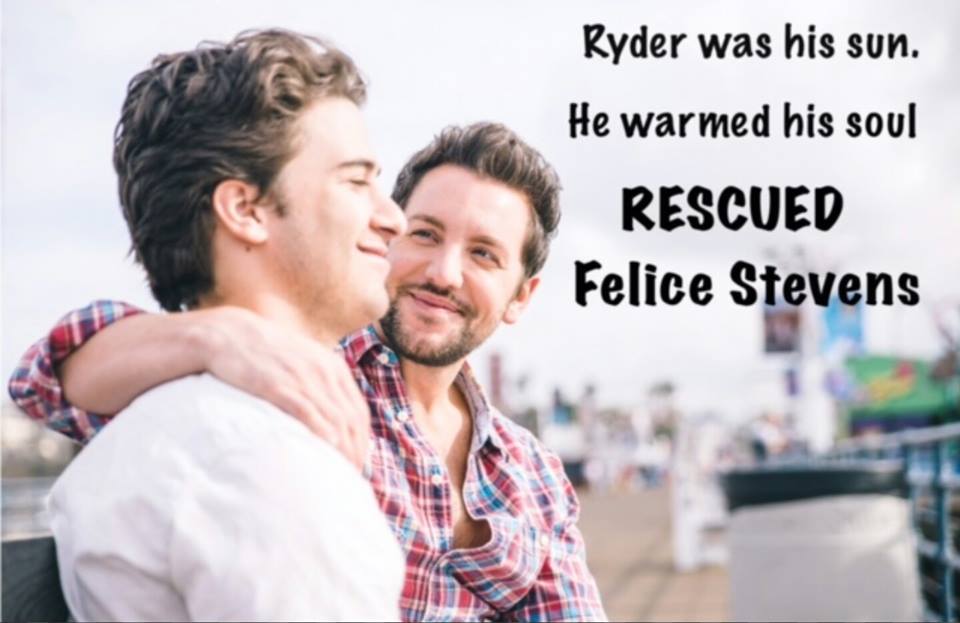 Landon licked his lips. “Are you two together, like in a couple? The only reason I’m asking is that you looked so happy to see Ry today, and Ryder always talks about you so much.” His voice trailed off as he looked at both of them.

Ryder cleared his throat. “I wanted to wait until things were settled between Jason and me, but now that it’s all good, yeah, Jason and I are together. You’re sure you’re all right with it?”
Jason stood by Ryder’s side, his hand resting on his lover’s shoulder. “You’re still okay working here, right?” He’d really hate to lose the kid.

Landon broke out in a big smile. “I think it’s cool. Jason’s a great guy, and I’m really happy for you.” Tears prickled in Jason’s eyes as the brothers hugged. This was the best of all possible outcomes. He pushed aside thoughts of Liam and his own disappointment.

“But honestly, I think she left being okay with me being here. Don’t worry.” He checked his phone. “Shit, I gotta go home and get ready for that stupid dinner.”

Ryder hugged him. “It’s okay.” His face fell. “Um, does Dad ever mention me or talk about me? Ever? Like even when Mom isn’t around?” Jason’s heart broke all over for him.

Landon shook his head. “He’s never home. I think this is the first time he’ll be home for dinner in over a month. The few times I did see him, he looked really sad and tired.”

“I’d be sad too, if I was married to your mom. No offense, but God, that woman is arctic.”
Jason shivered. Astrid Daniels could freeze water with a look.

Landon agreed. “Yeah, tell me about it.” He hugged Ryder. “It was great to see you. Tomorrow too?”

Ryder nodded. “Yep, provided the slave driver you have for a boss doesn’t work you too hard.”

They all laughed, and Jason received a shock when Landon gave him a fierce hug good-bye, whispering in his ear, “I’m really glad you’re with Ryder. You’re the best.” He picked up his backpack and ran out.

Ryder’s arms slid around him. A warm breath drifted over his neck as Jason relaxed in his lover’s embrace.

“You’re the best.” Contentment spread through him, as Ryder nibbled on his ear, sending an electric shock directly to his groin. “I thought about you all day while I was in court.” Ryder’s husky voice set Jason’s blood on fire. “Instead of my case, all I could think of was how I wanted you in my mouth.”

1) Tell us a little bit about yourself and what you're currently working on.

I’m sure you know I’m from Brooklyn, NY, born and bred. I grew up in Flatbush but now live in Brooklyn Heights, right near the Bridge.
My next book, One Call Away, is scheduled to release April 28th. It’s really a book that’s been close to my heart for over a year. It’s about a former model turned psychologist who has a radio show dedicated to relationship advice for gay men and what happens when a tormented, ex-Orthodox Jewish man calls him one night on a dare.

2) What started you on your writing journey?

I’ve always loved to write—poems, stories, anything. But I was laid up 3 years ago from hip surgery and my friends and I talked about it and I decided to go for it and follow what I’d always dreamed of doing.

3) Is there a genre you haven't written in but want to? What genre would that be?

Yes! I want to try a paranormal...I have an idea that I’ve been sitting on for a while. I just need the right head space.

4) When you're working on a WIP do you work with an outline or does the story drive itself as your creating it? Does it change from book to book?

Ha! I’ve never been able to outline, even in law school it was torturous. I get an idea for a story , throw it around in my head, talk it over with my beta reader and go back and forth. If I’m lucky it will come easily and I write. If not...there’s A LOT of back and forth  and deleting, coupled with much cursing. :-)

5) Which of your couples are your favorite and why?

Ohh no. You can’t make me do that. Although before I even conceived his story I knew I wanted a character like Marcus from Second to None...slutty, funny as hell but with a heart of gold.

6) What one story of yours would you want to revisit for an update on the characters and their lives?

I asked this question in my reader group and the overwhelming majority was Nick and Julian. So I do have a little idea I’m throwing around.

Oh boy. I hardly get to read but lately there have been so many good books. Rhys Ford- There’s This Guy, Josh Lanyon- Plenty of Fish. CS Poe- The Mystery of the Curiosities, S.c. Wynne-The Cowboy and the Pencil Pusher and Sam B. Morgan- Love by Design