Wonderland is the hottest club in River City, but it’s time to close. It’s a different world now, and club owner Chester doesn’t see Wonderland having a place in it. What will that mean for resident bartender and hotty bottom Brandon Sweet? Or for headliner, the Queen of Hearts? Or customers like Jesse and Colton, whose open relationship and threeways are the stuff of legend? This group of friends navigate the changes in their lives until one night when everything changes for good. 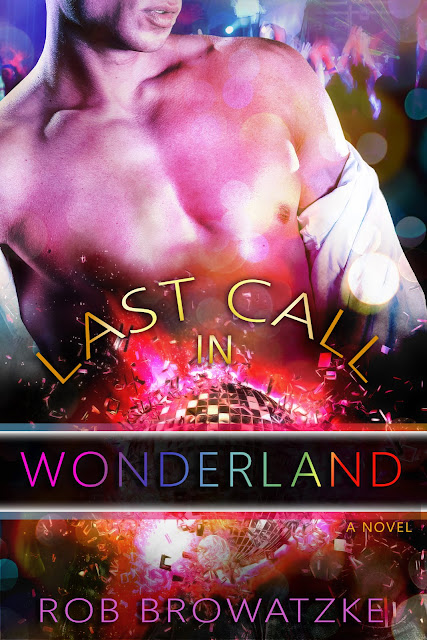 Brandon Sweet’s first thought on waking up was this isn’t my room.

His second thought was oh god, who is this?

He rolled over, facing away from the stranger next to him, in this strange bed in a strange room. He hadn’t even had that much to drink really. At least, not compared to a weekend night.

“Morning,” the twink next to him said with a moan.

Brandon rolled back over and took him in: brown curls and blue eyes and a smooth slender torso with a whisp of hair on abs that disappeared into the white sheets tangled around his waist. Whoever he was, he was certainly Brandon’s type.

“Morning,” Brandon said, sitting up in bed, letting the sheet drop to his lap. He looked down at his own body, comparing it to the twink beside him. Not bad, for thirty-one, but oh, to be twenty-one again! When he was twenty-one, he could’ve handled twice the tequila he’d had last night, and woken with half the headache. He knew he could have, because he had done just that. Week in, week out, for a decade.

Too early for that train of thought, he told himself.

“I had a really good time last night,” Twink said.

“Me too, me too. Hey, where’s my phone?” He looked on the floor for his clothes.

“Other room. You stripped off as soon as we got here,” Twink said with a smile. “So hot.”

“Hey, what can I say? I know what I want.” Don’t know your name, mind you, but I do remember how badly I wanted to get laid.

He did love a good Thursday night fuck.

“I can’t believe I finally got to fuck THE Brandon Sweet.”

Brandon smiled at him as he stood up. “Hope it was everything you expected.”

Twink reached across the bed to run his hand over Brandon’s abs. “And more!”

“I’ll walk you out.” The twink stood up and yes, Brandon remembered that impressive appendage. Young, hung, and hard – check, check, check.

Had they gone to Brandon’s last night, if he’d woken up with home turf comfort, he’d be pushing Twink back into the bed and climbing aboard to go again. Here though, in a room he didn’t know, with a guy he didn’t know, he suddenly felt vulnerable.

Once he’d slid back into underwear and jeans, it was a bit better. But his phone had 3% power, 32 notifications and it was halfway through the afternoon. He had to get home.

“Really?” Twink asked. “You said last night you only live a couple blocks away.”

That rang no bells, but Brandon was professional. “Oh yeah, I remember now,” he said, pulling his shirt over his head. “Will you be out later?”

As Twink walked him to the door, Brandon took in the apartment, trying to find something to jog his memory. It was simple, sparse, and wholly unfamiliar. Luckily, as he bent down to tie his Converse, he happened to glance at the fridge, where a photo radar ticket was held by a magnet. With his name in black and white.

Twink laughed. “You don’t know my name, do you?” he asked. “Billy’s my roommate.”

Fuck. Brandon swallowed and smiled. “Sorry. Tequila. What was it again?”

“Derek.” Twink grabbed Brandon by the belt and pulled him closer, taking his hand and guiding it down. “You’ll remember this at least,” he said.