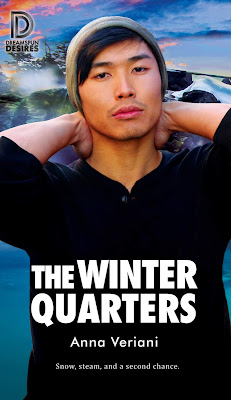 Reluctant socialite Kai has thirty-five days before his family starts shooting the next season of their reality TV show, revealing a life he’d rather keep private—and one that feels increasingly scripted. Desperately needing a break, Kai escapes to his childhood best friend Hiro Asada’s inn in rural Japan. He finds peace in the thousand-year-old hot springs, but his yearning for Hiro resurfaces at the worst time: Hiro is about to inherit the inn, and his parents expect him to marry within the year.


Hiro’s traditional family loves him for who he is, but they can’t imagine two men running the inn. Meanwhile, Kai has a TV contract his lawyer insists can’t be broken. Hiro and Kai need to think outside the box—and solve their problems before Christmas Day, when Kai’s show shoots its annual holiday special.

The private open-air hot spring was lined with evergreen bonsai and statuettes of snow hares and white geese. The falling snow steamed as it hit the water, and Hiro stepped in, leaning against the tiled pool wall.
The hot mineral water always felt amazing. After twenty-six years, it was safe to say he’d never grow immune to the pleasure.
He would also never grow immune to the pleasure of looking at Kai. Kai came outside, skin fresh and glowing, naked but for his small waist towel. He moved through space with unconscious artistry, all dancer’s legs and taut, graceful arms.
Hiro stuck his fingers between his lips and whistled.
“There’s America’s best swimsuit model,” he called out.
“You are the least Japanese Japanese inn owner ever,” Kai huffed. “Since when do inn owners whistle at their own guests?”
“If you recall, I, too, am an honored guest at this inn now,” Hiro said. “And I had to book this private bath because I’m so famous that random strangers might try to photograph me naked.”
Kai shook his head. “My entire life is a joke to you, isn’t it?”
“Only the funny bits.”
Kai just shook his head, obviously knowing better than to take Hiro seriously.
Not everything was a joke to Hiro, though. Right now there was nothing funny about the freckles on Kai’s bare arms, or even the mere fact of Kai’s arms. Extraordinary. All of him felt like a miracle, always, but especially when Hiro was with him in person. Kai’s nipples were tight, flat, and pink. His chest was flushed from the heat of the water, melting snow forming droplets in his hair. There was nothing remotely funny about any of this, but maybe the most serious thing was the arch of Kai’s long neck as he looked up, letting the cold hit his cheeks. Hiro traced that delicate curve with his eyes, his fingers tingling with the need to touch.

Anna Veriani was born with a deep love of queer lit and .99¢ New York pizza slices. After graduating from NYU with a degree in East Asian Studies, she set sail for Ishikawa, Japan. Now she spends her days writing by the river and dreaming of opening an expat pizzeria.