After the events of False Flag, Riggs is no longer the agency's golden boy, so when Hunter suspects a gay couple has been murdered in a hate crime in an exclusive gated community in Olympia, he takes the tip to Sam instead. While Riggs and Hunter contend with workplace politics and Riggs's recovery, Sam Dupre drives the case forward, even securing a partner for his undercover field work: handsome, popular recent transfer Rob Crawford.

Crawford's a seasoned field agent who doesn't bat an eye at posing as a gay married couple, but Sam can't help feeling like Crawford's mocking him. They rub each other in all the wrong ways in private even as they pretend to be a doting married couple in front of the neighbors...at least, until they start rubbing each other the right way.

Sam's dysphoria-and his HIV status-has held him back, but as he bonds with Crawford, he starts to feel seen for who he truly is. Surrounded by mystery and danger, now is not the time to blur professional lines, but how can Sam help himself?

Featuring: An #ownvoices trans character feeling his oats, a dreamboat foreign terrorism agent trying his hand at a domestic (teehee) case, and a supercute adopted housecat. With a special appearance by Callum Riggs, excessive trolling by Hunter Walsh, and, of course, a happy ending!

Meeting Crawford’s piercing green gaze, Sam steeled himself and said quietly, “We suspect religiously motivated White Nationalists could be involved. Whitewoods Olympia’s mission statement is one big conservative dog whistle for ‘old fashioned family values’ and my insider once toured the area looking for a home only to be given the cold shoulder when introducing a black family member to the mix. You may know Olympia is eighty-plus percent white with a two percent black population. Combined with its status as state capital and a cultural center, it’s an ideal location for racial purists to establish a religious enclave close to the seat of power.”

How Crawford took that news would speak volumes. Often the foreign terrorism agents didn’t take domestic terror as seriously, too wrapped up in their administration-sanctioned Islamophobia to acknowledge the clear and present danger of far-right extremists.

“Sounds like a case for Riggs.” Crawford sat back, brows furrowed again as if assessing the situation. Then he nodded seemingly to himself as if the pieces were coming together. Crawford was sufficiently political to understand why Riggs wouldn’t or couldn’t take the case right now.

“So you think someone in the enclave did away with the Millers? Sounds more like old fashioned neighbor murdering than domestic terror, but we do consult on cases of the murdered or the missing. Could just be some nutjob who somehow thinks queers in the neighborhood could lower property values.”

Sam bristled at Crawford using the word “queers” like it was his word to use. Sure, that was often how Sam described himself, but Crawford was a bro. He had no business using it. He bit back a keep that word out of your mouth and grunted instead, acknowledging the probability.

“Riggs is still recovering from the white nationalist attack from the group Weisse Drache, or I’m sure he’d be all over this. It’s definitely his wheelhouse.” Sam kept his voice as even and authoritative as he could, despite his urge to lash out. It was that self-control that had allowed him to climb so high in the Seattle office. “Even if it’s not White Nationalistic domestic terror—which I’m not theorizing; it’s what my anon suggested—it sounds very much like a hate crime. But…”

Sam trailed off, studying Crawford and doing his best to mask his irritation. Then he asked, “The other disappearances… What’s behind those?”

“Inconclusive.” Crawford stared, almost seeming to challenge Sam. “At least per the local PD. We could go in, see if we can draw some conclusions. If you really think it’s a hate crime, we could go in undercover. Either way, if we infiltrate the community, we can see what’s what.”

“We go in undercover,” Sam echoed, disbelieving. “We ‘infiltrate the community’.” Really, that was Crawford’s go-to?

After a beat, Sam grimaced, letting it all sink in. “That would be one way to access their information infrastructure and surveil the environs. The family is maintaining the house for the missing Millers, and from what I’ve heard they’d cooperate and let us use it as a base of operations for our efforts. You’ve got the green light to pursue this?”

“I was told to check it out, so that’s what I’m doing. Checking it out.” Crawford turned to his computer and put in his password along with the security dongle code. “Doesn’t need to be really deep cover. We could claim to be part of the family, housesitting, but make ourselves really at home. See what we can see.”

“Have you tapped someone to partner with you in the field?” Sam pulled out his phone, ready to plug in their third’s data, and looked up to meet Crawford’s eyes expectantly.

“We,” Crawford gestured between the two of them. “Can check this out. I really just need you there to give the appearance of a gay family. You can come in to work as usual if you need. The rest of my crew’s still in Turkey. It could take weeks to get another agent—if they’d assign another at all right now. By then, I may be off again.”

“You want to pretend we’re a gay couple?” Sam’s voice came out much squeakier than usual, and he cursed internally, hating how pubescent he sounded. “You want to replicate the Millers’ situation and see if there’s a bite?”

Technically Sam could do most of his work remotely, but pretending to adore Crawford was not a viable career choice. What the shit?

Then he thought of Hunter’s worried face, remembered how hollow Riggs seemed at Sunday dinner. They weren’t in any place to investigate this, even if Riggs could get the go-ahead, and the last thing Hunter needed was to be separated from Riggs right now. Or rather, the last thing Hunter needed was to go undercover himself, because he’d done enough of that, and Sam was over it, officially.

“Is that coffee done yet?” It sounded more plaintive than Sam had hoped, like he was in desperate need of caffeination, but he was. God, he really was.

“Sure.” Crawford turned and moved the press closer and pushed the plunger down steadily, big meaty hand on the top. “Listen, as a field agent who often works undercover, it’s not my first gay rodeo. Though, I’ll admit, it’s why I can’t just call just anybody in to help. You know, some people around here…”

Crawford leaned in as if taking Sam into his confidence, also implying that he was a cool kid somehow for not being squeamish about doing his job. “Particularly lately. We can just go in say we’re more or less housesitting until the Millers come back, leave it open ended but make ourselves at home, if you know what I mean. See what the mood is. If it’s nothing, we’ll just leave, no need to make a big deal of it until there’s something actionable.”

He pushed the finished coffee closer. “Sound like a plan?”

The Thursday Euclid is a strange and elusive creature dwelling in the Texas Gulf Coast region. Frequently mistaken for Bigfoot, Chupacabra, or the monster of the week, he is, in fact, a 30-something black sheep with a penchant for K-pop, geekery, and hot and sour soup. When he’s not playing Dragon Age or SWTOR, he’s probably watching B-movies or talking to his best friend and frequent collaborator Clancy Nacht. You can find him on Facebook, Twitter, or email him at thursdayeuclid at gmail dot com. 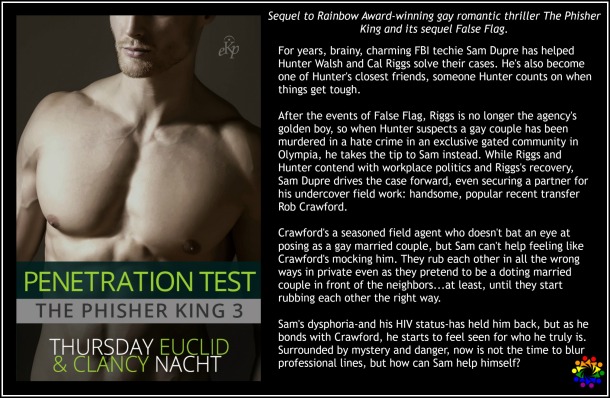