Roxy’s Recovery is Out Now!

This healing and heartwarming story will make you believe in the power of kindness and love again.

As the newest veterinarian in the small town of Coeur d'Alene, Idaho, Vaughn Winters doesn't have time for relationships. He is too busy healing injuries and establishing his reputation as a trustworthy vet. But when a strange man waves him down on a stormy night seeking help for his injured dog, Vaughn simply can't refuse.

Obviously homeless and with no means to pay for Roxy's medical care, Vaughn throws caution to the wind and strikes a deal with the hesitant stranger that would allow Roxy the time to heal and provide some much needed TLC to his property as well. As the days pass, Vaughn's curiosity grows. Alex's dedication to the job is as surprising as the sexy tats hidden beneath his rugged clothes. What could have pushed this kind, hardworking man to the streets, or cast such dark shadows in his otherwise bright blue eyes?


Will six weeks be enough time to earn Alex's trust? Or will asking questions cause him to tuck tail and run as soon as Roxy is able?

I was quickly distracted by how the evening light coming in through the window cast a warm glow on Alex’s face. He had a light speckle of freckles across his nose and under his eyes that I hadn’t noticed before, and I couldn’t help but wonder if anyone had ever kissed them before. I certainly would if ever I had the chance.

When I didn’t look away, he gave a soft laugh. “You know, that’s twice in one hour I’ve caught you staring. I’d say it’s a new record.”

I huffed. “Like you even notice how much I check you out.”

The corner of his mouth turned up. “Oh, I notice, Vaughn. Like every time you peek out the window or slow your steps when you go outside for something? Believe me, I notice.”

I turned a little crimson. “Whatever. I think you’re hot, so sue me.”

“Oh, that’s not what I’m afraid of,” he said innocently.

I blinked, trying to make sense of what he was saying. “What are you so afraid of, then?” I asked, suddenly dying to know. “Because frankly, I’ve been trying to figure you out for a while now. If you’re interested or not, I mean.”

“I am,” he admitted without thinking before setting his sandwich down and looking out the window. “I just can’t, though.”

The finality in his voice caught me off guard; it sounded less like he was rejecting me and more like he was refusing himself something.

It was a long moment before he replied, his voice low and almost inaudible. “I’m here for Roxy, Vaughn. I don’t want to do anything that would ruin this for her.”

I furrowed my brows. “Ruin what? At making a full recovery? She’s going to be fine. I’ve told you that.”

He still didn’t look at me, idly playing with a piece of bread while he continued to stare out the window.

And then, like a punch to the gut, it hit me what he was truly afraid of.

“You think I’ll kick you out?” I asked, stunned. When he didn’t respond, I tried again. “I would never do that to you, whether or not something happened between us.”

He still didn’t look at me or even acknowledge that he’d heard me, so I reached for his hand.

After a long pause, Alex shifted in his seat, causing his legs to accidentally squeeze mine under the table. He immediately jerked away, but to my relief, he didn’t pull his hand away. Instead, he turned his over so he could link our fingers together and gave me a nervous smile.

“I was starting to believe that,” he said, his attention on where our skin touched. “But… it helps to hear it.”

Check out Kim's Against All Odds Series. 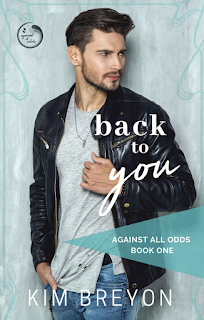 Back To You (Against All Odds, Book 1) By Kim Breyon

As a private investigator, I have a perfect record when it comes to closing cases…as long as you don’t count the only one that ever really mattered to me.

Even after a decade, the memory of the foster boy I once shared a room with continues to haunt my dreams. For five years, Riley helped me laugh when there was so little in our lives to laugh about. His gentle touch and stormy gray eyes were the only thing that could calm the swirling and turbulent thoughts and emotions within me.

But in the blink of an eye, the safe harbor my best friend provided was ripped from my life without warning or reason. His unexplained disappearance set sail to a lonely and hopeless journey. Now, I am no more willing to let the memory of my best friend go than I am ready to give up the search for him, as hopeless as it may seem to those around me.

And then a client asks me to locate a stolen treasure box. Clues have me heading from the city of Atlanta to a small, picturesque town in South Carolina called Reedsport. There, I hope to find the missing box; what I never expected was to find something else that I’d been missing for far too long. Could I have finally found a beacon of hope that would lead Riley Tanager back to me? 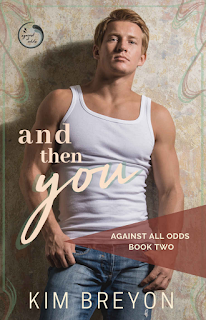 And Then You (Against All Odds, Book 2) By Kim Breyon

Love is a risk... but a risk worth taking.

I knew my life would change when I followed my best friend across state lines and transferred to the Reedsport Police Department. I just wasn’t prepared for how much.

From the moment I meet him, CJ Reyes isn’t what I expect, and neither is our chemistry. The fire with him is like nothing I’ve felt before, both in and out of the bedroom. His sexy sapphire eyes are cracking the walls around my heart, and for the first time in my life, I’m not rushing to repair them. But can I trust him with the heaviest burden of all: the dangers of my career?

After being cut from the national team in Mexico, I’d hoped to get away from it all when I accepted a temporary coaching position in a small town in South Carolina. The reprieve doesn't come, though, thanks to my family constantly breathing down my neck and the uncertainty of my future looming over me.

Then I meet Jake, whose humor and understanding feel like my only way out of the darkness. Our fiery nights and growing friendship make my loss feel a little less devastating and my future less bleak. But when I'm forced to make a decision that could change my life forever, will Jake see reason? Or will I end up losing something far more valuable than the world championship? 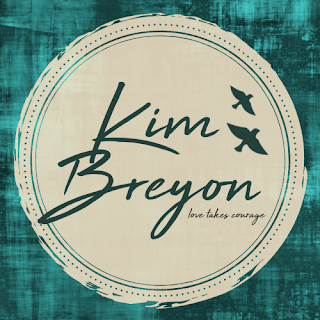 I am an Idaho native who grew up dreaming about traveling the world and writing stories. I would often spend my spare time curled up with my favorite blanket and a notebook, writing another fairy tale. I never would have guessed those fairy tales would one day turn into gay romances, but that is where my heart led me, and I am so glad it did. I write about love because I believe it can happen to anyone, with anyone. I also believe dreams never expire, redemption is possible, and true forgiveness can heal us in ways we never expect. I know firsthand how messy life can get, but as any artist will tell you, a little mess is needed to create something beautiful. That’s why I write, to help others see that anything can be beautiful. You can often find me with a mug of coffee in one hand, and a dog toy in the other. There is never a day that goes by without my sweet boy insisting on a game - or twenty - of fetch.