Dawning by Mychael Black - Release Blitz with Excerpt and Giveaway 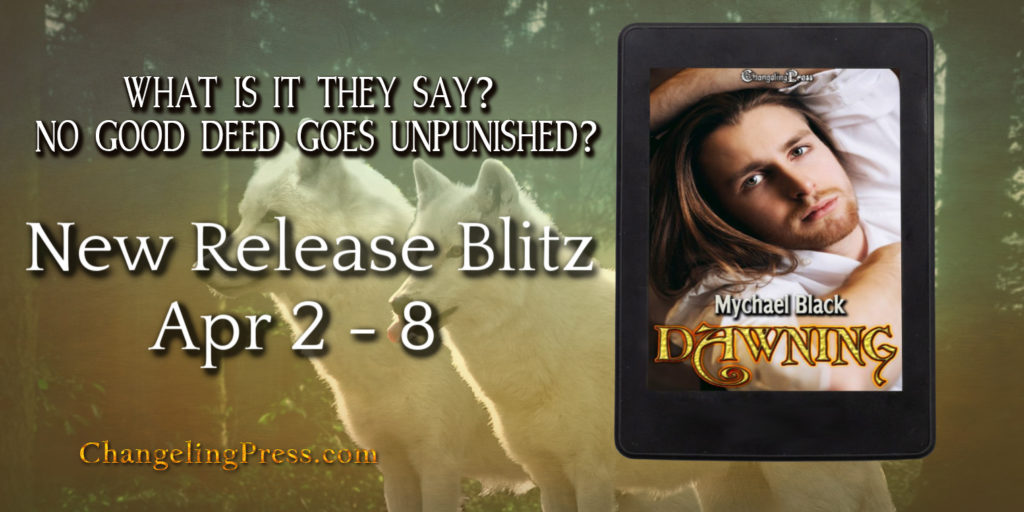 What is it they say? No good deed goes unpunished?

Ren is on the run. His people have aligned themselves with every known mage cabal in the country to rise up and overrun the world above. As the head of House Daturi, he’d been expected to follow the other Houses and lead his own into war. Except he has no desire to fight -- with anyone. Now he has two choices: fall in line or die as a traitor. Neither seems promising.

Arulas is a wolf shapeshifter who prefers to avoid contact with others, no matter the species. He has a cabin deep in the woods, nestled near the border of the Light Fae realm. He doesn’t bother them, and they don’t bother him. Until now, things were quite perfect. Then he finds a half-dead Dark Fae in the middle of nowhere. Not one to leave a man down, Arulas nurses the Dark Fae back to health, only to find himself square in the middle of a damn war.

Ren smiled against the sweat-slick skin beneath his lips. The young man bent over the workbench moaned with every stroke of Ren’s fingers. Doing this in the back of the blacksmith’s shop was probably not one of Ren’s smartest ideas, but, here lately, he found himself caring less about who saw him.

“Please,” the blacksmith’s apprentice murmured, backing up onto Ren’s fingers even more.

Unable to wait any longer, Ren withdrew them and thrust into the deliciously tight heat of the man’s body. The young man grunted and reached down to jerk himself off. Ren gripped the lean hips tight and rode the sweet ass for all he was worth.

The man beneath him gasped, and then Ren’s cock plowed back in for a final time, filling the man’s ass. Ren moaned and bent to kiss the smooth, muscled back.

“We really should do this more often.”

The young man snorted. “He’s probably drunk.” He stood slowly, easing his pants back up. Then he turned and met Ren in a lazy but drugging kiss. “Tomorrow?”

“Mmm…” Ren ran a fingertip down the bare chest in front of him. “I’ll let you know. It depends on how quickly I can get away.”

Ren finished dressing and chuckled. “Believe me, the dislike is mutual.”

“It was arranged, I’m afraid.”

The young man shivered. “I’m so glad I’m just a blacksmith’s apprentice and not a noble.”

He smiled. If he had his way, he’d happily drag the man off for a night full of sex and debauchery. He sighed. “I’m expected in the Council chambers soon. But I will let you know when it’s safe to resume this.”

After a final slow kiss, Ren waved and left the blacksmith’s shop and his young, occasional lover behind.

Two hours later, Ren wished, not for the first time, that he’d been born a peasant. He watched the Council proceedings warily, dreading the outcome. Every House, including his own, waited for the word from their leader, Zerin, and the Council. Every day, more mages filtered into the Council chambers situated in the House Vakeor keep. Ren lost count at over three hundred mages, but he figured there had to be more. The damn sorcerers seemed to be everywhere. Not that Ren cared about magick either way, but it made him uneasy to see any here, especially in such numbers.

Rumors swirled among the peasantry that Zerin was under mage influence, but the pompous ass had been itching to get the Houses unified to take over the world above. Ren didn’t agree with such ambitions, and a part of him feared the consequences should Zerin’s war come to fruition.

“Lord Ren, what of House Daturi? Are you prepared?” one of the Council members asked.

Ren had been dreading the question. “I… yes. House Daturi is ready to march with the others,” he lied.

In truth, he didn’t care if House Daturi did or not. He had no intention of sticking around to watch. He’d packed his things a few days ago, what little he could carry, and only waited for the right time to leave. If he was careful, he could get above ground by morning. Of course, the second he was missed, there would be a price on his head the likes of which no Dark Fae had ever seen. They’d lost a few guards, but never anyone of Ren’s status. He had to do it quickly and quietly. He hated leaving his few lovers, but he couldn’t stay here any longer. Not with his sanity intact.

“Very good,” Zerin said from his dais at the front of the Council chamber. “This meeting is adjourned. We will reconvene in the morning to set our plans in motion.”

Dismissed, Ren and the other lords filed out of the chamber. Ren headed back toward the tunnel leading to his own keep, a good distance from House Vakeor. Each House’s territory branched off from House Vakeor’s, some several days’ journey away. Thankfully, House Daturi was only a few hours’ walk. He’d left his guards at his keep, more out of caution than anything else. He’d long since lost any trust in his own people, even those in his House. If Zerin wanted a war, so be it, but the man would have it without Ren’s aid. House Daturi’s followers could do as they pleased. 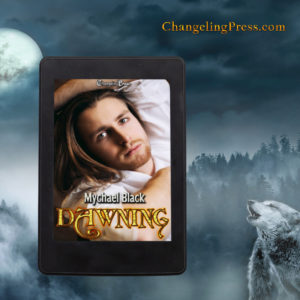 Myc has been writing professionally since 2005, solo and with Shayne Carmichael. Genres include pretty much anything (no steampunk yet), though Myc is well known for paranormal stories. When not writing, Myc is usually playing PC games, reading, watching Netflix, and spending way too much time on Facebook. Since the question has come up in the past, pronouns are not an issue. Myc is bio-female, mentally male, and 100% genderfluid, so any pronoun works!