The Other Side of Here by E.M. Lindsey - Release Tour with Excerpt & Giveaway 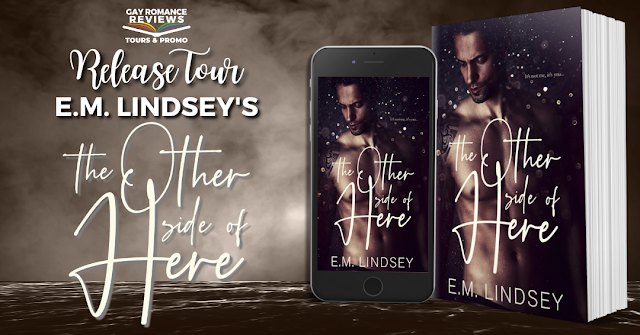 Release Tour, Excerpt & Giveaway:
The Other Side of Here
By E.M. Lindsey

Married for nearly two decades, Luca and Sebastion know what they want from life and from love, but they certainly don’t expect the shake-up that is Alexander Thomas. Their marriage has been open since the start, but it’s not until Luca sends a wrong text that they realize there might be room for something new. Something a little bit more permanent. The only problem is, Xan’s already taken, and the man he’s with is dangerous.

Xan’s life has been off the rails since his parents died, and with his current relationship turning toxic, he’s not sure he wants to inflict his chaos on the lives of two men who don’t deserve it. Luca and Sebastion are worthy of so much more, and Xan isn’t sure he’ll ever deserve the chance at their unconditional love. After all, he’s been engaged to a man who can’t stand him for two years, and he still can’t find the courage to leave. But when things go from bad to worse, Xan knows something has to give, and he realizes then the only difficult step to take is the first one.

Some relationships are meant for moments, and some are meant for forever, but none of these men know how their story will end until they’re standing together, on the other side of here.

He dialed up his husband and sat back in his chair as it rang.

“Oh, my love,” Sebastion breathed through the speaker.

Luca closed his eyes and let the sound of Sebastion’s voice wash over him. “I’m home.”

“Was Alexander still there when you got in?” he asked.

Luca chuckled. “Yeah, and in my morphine haze I don’t remember you telling me he was going to be here. Todd said it was some kid, and I figured it was like the neighbor’s grandson or something.”

“It was fine.” Luca stared down at his arm again—at his fingers which were bright red, and he let himself feel the pain for a moment. “I asked him to stay. I hope you don’t mind, but I really don’t want to be alone right now.”

“Luca,” he warned, and there was that tone in his voice—the one that was always more reasonable. The one that was able to turn off his dick and his heart whenever he needed to.

Sebastion was quiet a long moment, then he sighed. “He’s very beautiful. You told me he was, but I didn’t have any clue.”

Luca closed his eyes and nodded. “Yes, he is. When I got in, he and Ivy were napping on the sofa, and I think I fell a little bit in love with him right there.”

To celebrate E.M. Lindsey's new release, They're giving you a chance to win one of 2 prizes:

E.M. Lindsey is a non-binary, MM Romance author who lives on the East Coast of the United States. When they're not working, EM is spending time on the beach, kayaking, swimming, and playing with their dogs.