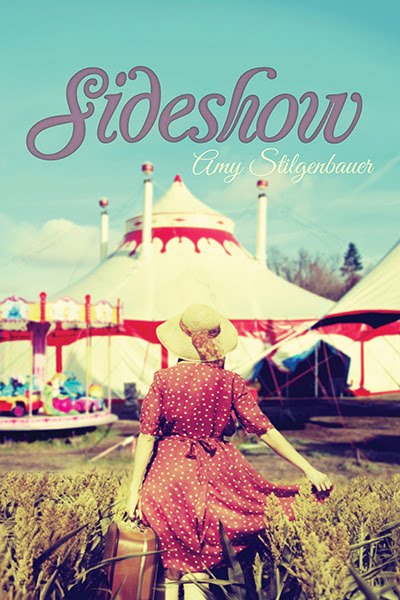 Abby Amaro wants to sing at La Scala Opera House, but she’s a good girl, and in 1957 good girls get married. Still, when she receives her first marriage proposal, she freezes, knowing the way her suitor makes her feel bodes trouble. When he won’t take no for an answer, she flees, joining up with a traveling carnival.

Thanks to a burlesque trapeze artist and the world’s saddest clown, Abby bides her time and fits in until she can rejoin the world she knows. She doesn’t expect a sideshow strongwoman named Suprema, who captures her imagination. As the carnival makes its way across the Midwest, Abby learns much more than she had ever imagined—about herself, about her identity, and, most importantly, about love.

Abby couldn’t remember falling asleep. She only remembered the dark night and how, outside the window of Della’s trailer, the rolling slopes of Eastern Ohio slowly flattened into the farmland of the western side of the state and faded into darkness. She didn’t say much during the trip, but her mind was spinning, unable to process what she had done.
Once, when she had been a little girl, barely older than Annette was now, her mother had taken her and Natale to visit their aunt in Chicago for a week. It had been a nice visit. They had embarked on the train with a great deal of ceremony, and Za Teresa had spoiled the pair rotten, loading them up with peach-shaped marzipan and pizzelle until they were both sick. She hadn’t left Cleveland for any extended period of time since. Oh, sure, she’d talked and dreamt about it. Nonna often wistfully mentioned taking a trip back to her girlhood home one more time now that the war was over and taking Abby along to look after her, and then, if her opera career took off as she had once hoped, she would be visiting all the great cities. In her scrapbook, clippings of Palais Garnier, La Scala, and The Met were decorated with carefully drawn hearts and hopeful stars and the scrawled word: someday. Still, she had never imagined that when she departed the Coventry neighborhood again, it would be in a burlesque dancer’s trailer.

Hi Amy, thank you for agreeing to this interview. Tell us a little about yourself, your background, and your current book.

Glad to be here! I’m a writer and history nerd from Michigan, who has a bunch of really hip hobbies like knitting, swing dancing, and genealogy. I grew up in a small town that had plenty of carnivals every summer and they fascinated me. I’m sure in many ways this novel grew out of that fascination. Sideshow is a work of historical fiction set in the late 1950s and follows the adventures of Abby Amaro and what happens to her when she runs away to join a traveling carnival.

It usually starts with a idea germ like “I want to write a story about a carnival” or “I want to explore big band music.” Then I sit down and I free write from there. Mostly what shows up at this step is nonsense, but eventually a soup of characters and settings start to form and I can pull specific stories out of it. Once I’ve settled on the direction I want to go and what I want to say, that’s when I begin  researching, outlining, and character sketching (literally for major characters. One of the crucial steps for me in getting to know a character is drawing them).

2)     Who doesn’t love a good hero? Tell us about your protagonist. Was there a real life inspiration behind them?

Abby is an absolute sweetheart. Insecure and anxiety ridden as she is, she always manages to use those feelings to propel herself forward and maintain an open vulnerability that I really admire. She is fictional and all her own person, but she is partially inspired by a number of amazing women from my own life who would have grown up in Abby’s world: including my own grandmothers, great aunts, and cousins.

3)     What real-life inspirations do you use when world building?

For Sideshow I was lucky to have a lot of real-life inspirations to build upon. I did a lot of research into real life carnivals throughout history and built upon them for the setting as well as the characters. For example: Suprema’s act was partially inspired by several famous historical strongwomen, such as Kate “Vulcana” Williams and Abbye Stockton and Della’s by the acrobat Lillian Leitzel. I also used a number of historical resources, including archives and oral history interviews, to envision what Cleveland and other locales the carnival stopped in would be like in the 1950s and what life would have been like for Abby growing up.

4)     Did you learn anything from this book and what was it?

I learned a ton of things while writing this book. Some of them were about writing such as “not all of your ideas need to be included. Some things can happen off screen. Aka streamline a few of those scenes.” Some were more historical. For example, did you know that the term recreational vehicle was not used to describe a trailer until the 1970s? Or that hot-air ballooning was not really a thing people did recreationally until the 1960s? I had envisioned a pivotal scene taking place in a hot air balloon at the beginning of the process, but scrapped it when we got into research. I still love the scene, though. Maybe another book.

Pizza: New York Style, with artichoke hearts, onions, hot peppers, anchovies, and fresh mozzarella. This would be accompanied by a glass of dry red wine to drink and truffle fries. For dessert we’d have chocolate babka and an espresso, maybe some ice cream too. It’s my last meal on earth, so why not?

Amy Stilgenbauer is a writer and aspiring archivist currently based in southeast Michigan. She is the author of the novelette series, Season of the Witch, as well as the Young Adult novel, The Legend of League Park. Her short story, The Fire-Eater’s Daughter, was included in Summer Love, an LGBTQ Young Adult collection published by Duet, an imprint of Interlude Press. When she isn’t writing, Amy enjoys all things bergamot and tries to keep her cats away from her knitting. 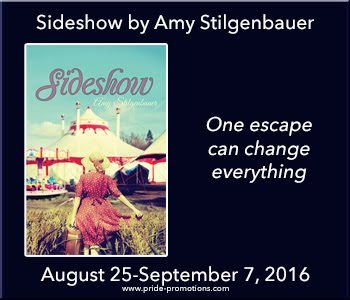 Rafflecopter Prize: $25 Interlude Press gift card for one winner, an e-copy of ‘Sideshow’ for five winners 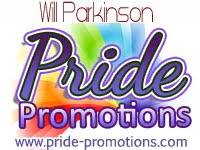