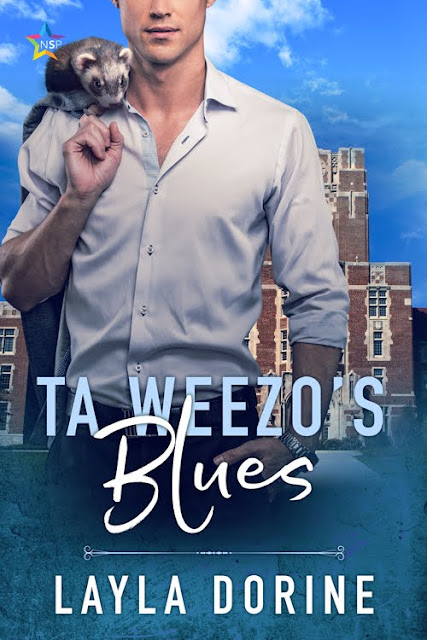 Sabre never had any intentions of becoming the teacher’s pet. In fact, most of his school years have been spent trying to avoid attention. The scar that mars his cheek has made him wary of strangers, their questions and prying eyes leave him feeling exposed in ways he’s uncomfortable with. Accustomed to blending in, he lurks around the shadows in the back of classrooms, turning in exemplary work but rarely taking part in discussions.

Professor Locklear’s Native lit class is different though. Sabre’s interest in the subject matter, coupled with a dedicated scholar’s need to turn in the best work possible, leads him to seek out a more advanced reading list, much to the delight of Professor Locklear. When he comes across Sabre reading material beyond even the advanced list, Professor Locklear invites on a fieldtrip to a nearby village. Along the way he learns more than just the knowledge contained in the books. He learns about trust and discovers that there are others out there just like him— shapeshifters.

What he believed was an individual anomaly turns out to be something beyond legend and lore, a whole different culture he’d never known existed. The only way he can move forward is to let his shields down long enough to trust the man whose conversations he’s come to enjoy, but to do that, he’ll have to stop distancing himself from everyone.

The hallway smelled of old dust and coconut curry, setting Sabre’s stomach growling as he trudged the last few feet to Professor Locklear’s door. Instinctively, he pulled his hood low, casting a shadow over his eyes, and with practiced ease, he swept his hair forward. It would have to do. Sucking in a deep breath, he counted to five before letting it out slowly, then licked his lips, and knocked on the door.

The voice was slightly muffled by the wood that Sabre partially shoved open, only enough to poke his head in about halfway.

“Excuse me, professor, do you have a minute?”

Sabre kept his head angled, watching Professor Locklear out of the corner of his eye. Several moments passed before his professor stopped writing and placed the pen beside his notebook, raised his head, adjusted his glasses, checked the clock, and then brushed a stray strand of hair back from where it had fallen over one eye.

“I have a few, so you might as well come in. No sense hovering half in and half out of the doorway.”

Sabre shuffled forward, carefully keeping his eyes lowered as much as possible.

“So, what can I help you with? Are you in one of my classes?”

“Ahh, you must be the one who sits in the corner by the emergency exit, where it’s nice and dark. I have to admit, when you first chose that spot, I assumed you were looking for a place to nap, but you’ve since proved me wrong. Whenever I look your way, you’re focused intently on me or the power point.”

“Yes, sir. I enjoy the material and some of the discussions are pretty fascinating.”

“Really? In that case, why is it that you’ve never taken part in any of them?”

Shuffling from one foot to the other, Sabre carefully contemplated the question before responding. “I try to let my papers speak for me. I’m bad at public discourse. I get tongue-tied and trip over words or end up being so hesitant that people talk over me. When I’m writing, I can organize my thoughts and present a more complete analysis of what I’ve read.”

“Sounds as if you are extremely self-aware. Not a common trait these days, I’m afraid. Still, if you feel you have something to add to a conversation, then I hope you won’t refrain from doing so, er… I’m sorry. You’ll have to help me out with your name.”

“Ahh, yes, one of the more unique ones this year. You’re right; your papers are remarkably organized, well thought out and quite complex in their reasoning. I must admit, you’ve had me rereading a few things I haven’t gone through in years just to understand why you’ve presented some of your comparisons in the manner in which you’ve organized them.”

Sabre grinned, a surge of pride rushing through him. “Thank you. That’s actually why I stopped by. I was wondering if you had any books you could recommend, similar to the required material for the course. I’ve finished reading everything on the syllabus, plus the referred texts I came across when I was researching; killed a couple piles of sticky notes and pens in the process, too, so now I’m hoping for more.”

The professor’s eyes went wide and he steepled his hands on the desktop calendar, tapping his fingertips together as he slowly scrutinized Sabre, making him shuffle more and tug at his hoodie to ensure it shadowed his face.

“Try as you might, I don’t think you’re going to change colors and blend into the woodwork. If you do, I think I’d have to take a half day off and schedule an immediate exam with my optometrist,” Professor Locklear remarked with a chuckle. “You can grab a seat, you know. I’m not a fire-breathing dragon about to roast you for stepping into my lair, though I wish I could singe a student or two when I catch them snoring.”

“I guess not. Well, I must say your question caught me a bit off guard. It’s not one I’m used to, at least not from someone who wasn’t required to take my class. Are you considering adding Native Studies as a minor? You are a junior, correct?”

“Ahh, okay. So are you looking for something specific?”

“Well, I, umm, really enjoyed Reservation Blues, so I found the other Sherman Alexie books and read them too. I loved the myths and legends book you assigned, and Fools Crow and Love Medicine were extremely fascinating. I read House Made of Dawn twice, not because I didn’t understand it the first time, but because it resonated with me, and I was compelled to reread it. I didn’t dislike any of the assigned reading if that helps at all?”

A long, low whistle emanated from the professor, who cocked an eyebrow at him, clearly impressed at all the reading Sabre had already done in just the first five weeks of the semester.

“It does, though there was no reason to finish the course load in a few weeks’ time; wouldn’t want you to burn yourself out.”

“It was easy, though. I always work ahead. My work-study job is in the library, shelving books and working at the research center desk, answering phone calls and emails. I usually have a ton of downtime and write most of my papers there. Plus, I’m carrying a light course load, four classes, since that’s all I need for graduation.”

“Well then, let me see what I can do to find you something.”

Rummaging around on his desk, Professor Locklear began moving neat stacks of paper until he finally found something of interest. Sabre watched as he perused the list before finally holding it out for him to take.

“Try these; it’s the reading list for my Native Literature 103 class, since I’m pretty sure between your papers and what you just told me, you’ve read most of the books for the 102. See if any of these interest you, and if you have any questions or would care to discuss them, please feel free to come back, or you can stop in my Native Lit discussion group. We meet in the atrium every Wednesday night at eight. Who knows? Perhaps you’ll be inspired to participate.”

“Thanks, I’ll umm… I’ll think about it,” Sabre said, still staring at the proffered paper. Reaching it meant he’d have to move closer, into the brighter lights above Professor Locklear’s desk. Biting his lip, Sabre took the three steps to the desk hesitantly, keeping his eyes on the paper and not the man.

“Are you okay? Is something wrong?”

The concern in his voice was what made Sabre raise his head, and the moment he realized what he’d done, he ducked it again, took the paper, and backed away until he felt the door at his back. Twisting around, he fumbled for the doorknob.

“If you’re hiding in the shadows because of that scar, please know it isn’t necessary.”

Sabre touched his cheek, stroking his fingertips along the rough edges of the raised, puckered skin as the memory of moonlight striking glass from a busted bottle flashed through his mind. Almost instantly, his breathing picked up, and his chest felt tight as the first stirrings of panic surged through him.

“I’ve got to go,” Sabre muttered, nearly smacking himself in the face with the door as he wrenched it open. “Thanks, professor.”

Sabre took off before he heard the rest, sprinting up the curry-scented hall, the stench making him gag. Bursting through the outer door, the fall air hit him like a gut punch, carrying with it the scent of dying leaves. He gagged, bile rising in his throat. Skidding to a halt beside a bush, he vomited, grateful nothing but acid remained in his stomach. By the time he finished, he’d broken out in a cold sweat and felt gross and tired, wanting nothing more than to get back to his dorm room and take a long, hot, shower and climb into bed with a movie.

Glancing at the slightly crumpled list he gripped in his fist, Sabre sighed before smoothing it against his thigh, folding it carefully, and tucking it into the pocket of his hoodie. Shoulders slumped, he turned and trudged back toward his dorm, grateful the day was at an end. All in all, it had been both a success and a disaster. Next time, he’d just email his request, he decided, as a cold wind made him shiver and debate what the hell he’d been thinking, going to see his professor in person.

“Stupid,” he muttered as his short walk came to an end at his dorm.

For a so-called genius, he sure could be an idiot sometimes. 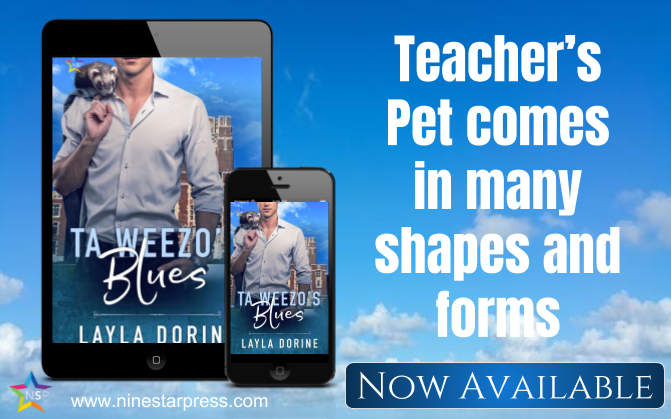 Layla Dorine lives among the sprawling prairies of Midwestern America, in a house with more cats than people. She loves hiking, fishing, swimming, martial arts, camping out, photography, cooking, and dabbling with several artistic mediums. In addition, she loves to travel and visit museums, historic, and haunted places.