Jessica was a successful IT Director, but now she is on the run. Accused of fraud and orchestrating her company’s downfall, she travels as far as the island of Lindisfarne in Northumberland before breaking down.

There, an American, Anna Meyer, takes her in and offers kindness without questions. As they become closer, Jessica soon discovers Anna has her own much bigger problems and a past that comes knocking.

Chapter One
Anna’s eyes were shut tight. She held a coffee cup in both hands below her chin.

It had been a mistake, a huge rotten awful mistake, and now, as some additional sadistic punishment, Anna would have to pay. No, make that two mistakes. First, marrying him, and second, buying an overpriced dump she couldn’t afford to sell.

She remembered a third, signing the divorce papers without really understanding what they had owed on the farm. No, the last wasn’t a mistake. It was the only way out.

Forcing herself to lift her gaze above the rim of her cup, she focused on her mother across the table. Tourist season had not yet started, and they were the only people in the Crown Hotel.

“Honey, sell and come back to the States,” her mother pleaded.

“You know I’m not doing that!” Anna slammed down her cup, before noticing the shock on her mother’s weary face. “I’m sorry.”

Her mum had flown all the way from Michigan after hearing how distressed she’d been on her daily calls home. “Anna, how are you paying the mortgage at the moment?”

Anna leaned back in her seat. “In the divorce, John signed the house over to me with enough money for six months. So, right now, I only have four months left.”

“I don’t understand why you would agree when you don’t have any income. He’s a lawyer, you should’ve asked for a lot more.”

“Mom, I’d expected to get the business going, you know, I told you… And I wanted to see the back of him. But now, I couldn’t even sell up if I wanted to. When I had it valued, the farm was worth thousands less than what we paid for it. And then I found out what we owed. If I sell, after all the costs, there’d be nothing, and I’ll still owe what is on my cards.”

Anna rested her chin on her chest, and her blonde hair fell forward, concealing her eyes. She hated that her marriage had ended. Hated that all her plans to turn the old farm into a business were now broken. Her sanctuary had become a burden.

A moment passed before her mother continued. “Why not come back home and wait for prices to go up? They always do, you know.”

Her mother leaned forward. “Just come back. It would be all right. He won’t bother us, I’m sure.”

“He was released last month, you said. And he’s still in Michigan?”

“As far as I know… But enough about that. You know, you could just default on your house payments, and it’ll be repossessed. The banks won’t chase you.”

Anna had considered the idea of going back home, but she couldn’t face it. She knew the fear would return. Especially now he’d been released. She had to keep Abbie safe. But also, the thought of being a barista at twenty-nine, while listening to whispers about her British husband leaving her for a younger woman, made her stomach turn. She’d rather drown in the cold North Sea outside her kitchen window.

She put on a brave smile. “Well, I’ve got four months. Things will improve. Maybe I can make enough from pony trekking this summer.” She didn’t want to worry her mother more than she had, so she didn’t mention she only had one pony and the stable’s roof needed to be repaired. It was another thing she couldn’t afford.

“There you go.” Her mum squeezed her hand. “Darling, do you have a friend here to help you?”

“Yes, a few.” It was a blatant lie, but she couldn’t have her mother concerned that she was alone. The truth was the people here weren’t very friendly. They seemed to stick together in groups as if they might catch the Black Death from someone new. Being the American who had bought a croft on their holy island, she hadn’t been welcomed into the tight-knit community.

Anna reached into her pocket to retrieve her watch and check the time. The strap had broken earlier in the day, and it wasn’t as if she needed it. She had her phone, and there was always a clock somewhere. It was just, since she was sixteen, she’d always worn it. The thought reminded her of her older sister, Emma, and caused tears to well up in her eyes.

She blinked to clear them and forced herself to damp down her emotions before her mother noticed. “I’m sorry Abbie wasn’t here to say goodbye.”

“I understand. The timing wasn’t good,” her mum offered. “It was nice to see her on the weekend. It must cost a lot to have her go to boarding school?”

Anna shook her head. “It’s free. The council pays, it’s the local government. There’s no secondary school on the island and, because of the tides, it’s nearly impossible to cross and get back during a normal school day. So, kids older than ten have to go to the boarding school on the mainland. Right now, there’s only three students from the island who do it, though.”

“She never says she doesn’t want to go back and she’s picking up an English accent.”

“I noticed.” Her mum chuckled. “She’s becoming an English rose. Emma would be proud.”

Anna didn’t want to disagree. At fourteen, Abbie was more like a thistle than a rose, at least with her anyway. One minute they were fine and having fun, the next they would be at loggerheads. Perhaps, in the holidays, things will be better between us.

Anna remembered why she had looked at her watch and touched her mother’s arm. “It’s time for your bus.”

“I wish I could have stayed longer.” It was her mum’s turn to lie. Anna knew her mother thought England was too cold, as well as expensive and inconvenient.

Anna’s mother got up and took hold of the handle of her cabin bag. “I know you don’t want my help with money, but it’s there if you need it. And do come home. I worry about you and Abbie.”

Outside, they hugged goodbye. It was still pretty cold for mid-May, and the wind cut through the fibres of Anna’s burgundy all-weather coat. She buried her hands in her pockets and watched as her mother boarded the small bus that would cross the mile-long causeway back to the mainland before the tide covered it.

Anna’s hair was blowing into her eyes. She brushed the wavy strands aside, before bursting into tears and darting back in the direction of her home.

Hurrying through the small village with her head down, she soon left the few buildings of the hamlet behind.

The island was small, only a few miles in both directions. In the winter, no more than a few hundred people braved the North Sea storms. Spring was not much better, with high tides and cold easterly winds from Norway. It was a suffering romantic’s paradise. For Anna, only the suffering part seemed true now. She passed the ruins of the old monastery, said to be the birthplace of Christianity in Britain. Beyond it, waves crashed against the rocky coastline.

She tried to put her predicament into words, but all she could think of was a swimming lesson from her grandfather at his cabin in Michigan. As was the tradition, Grandpa Brent had the job of teaching the younger family members how to swim. Anna had begged her way out of swimming until, at eight years old, her mother insisted she must learn. It was apparently a necessary life skill. So, there she was standing in her newly purchased white-and-pink one-piece at the end of the dock with Grandpa Brent behind her. He was explaining how to move her arms and legs. Looking back, she should have questioned why the man was fully dressed. Next thing she knew, he’d picked her up by her waist and had thrown her off the end of the dock into the lake.

Anna would have drowned if it wasn’t for the end of a bamboo fishing rod the old idiot offered her when she managed to surface. She’d desperately grabbed the thin yellow pole and used it to get back to the dock. Sobbing and hunched over, having literally been fished out of the water, she looked at the person she had trusted and screamed at him before running back into the cabin where her mother and older sister were making lunch. She still hadn’t learned how to swim and, now, she felt like she was underwater again.

On the exposed barren land, she followed a single-track road that hugged the jagged coast until Lindisfarne Castle could be seen on the south-eastern corner of the island. It was perched on a pinnacle, half-hidden by sea mist. Anna found some solace in the old fortress, knowing it had been there for four hundred years, withstanding all that had been thrown at it. But more so, it comforted her knowing people had lived, worked, and survived in its walls. If they could, so could she. She turned down a narrow muddy lane and scampered towards the eighteenth-century farmhouse that was her home. 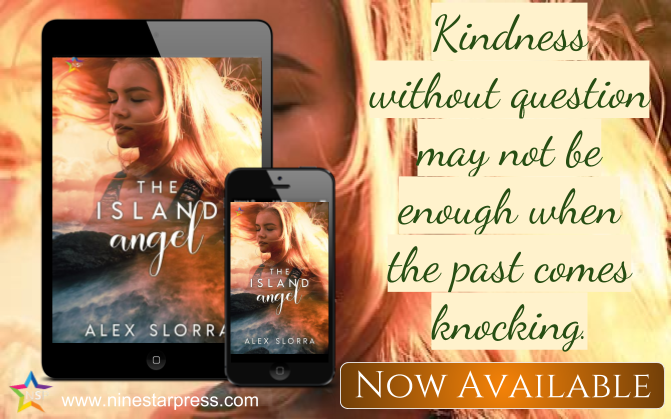 Alex is a lesbian fiction novelist based in the UK. She grew up in Canada and completed a BSc degree in Nova Scotia, before moving back to work in central London. Alex has also lived in the United States and France. Since a young age, she has consumed a mixture of historical fiction, fantasy, and romance. Alex enjoys music creation, photography, painting, and the guitar, but most of all, things she doesn’t understand. For her, writing is a way to inspire virtues that should happen more often. Follow Alex on Twitter.