Contact by M.D. Neu - Release Blitz with Excerpt and Giveaway 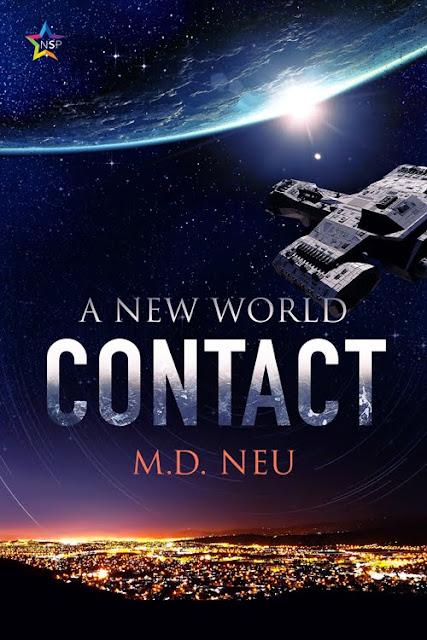 A little blue world, the third planet from the sun. It’s home to seven billion people—with all manner of faiths, beliefs, and customs, divided by bigotry and misunderstanding—who will soon be told they are not alone in the universe. Anyone watching from the outside would pass by this fractured and tumultuous world, unless they had no other choice. Todd Landon is one of these people, living and working in a section of the world called the United States of America. His life is similar to those around him: home, family, work, friends, and a husband.

On the cusp of the greatest announcement humankind has ever witnessed, Todd’s personal world is thrown into turmoil when his estranged brother shows up on his front porch with news of ships heading for Earth’s orbit. The ships are holding the Nentraee, a humanoid race who have come to Earth in need of help after fleeing the destruction of their homeworld. How will one man bridge the gap for both the Humans and Nentraee, amongst mistrust, terrorist attacks, and personal loss? Will this be the start of a new age of man or will bigotry and miscommunication bring this small world to its knees and final end?

Maintenance drones passed the Speaker General’s window as Mirtoff stifled a yawn. How long would they be here this time? The fleet stopped in a holding pattern while repairs were performed, the darkness of space surrounding them. Soft light from the window surround bathed her in a warm glow as she brushed away the few strands of hair that dropped from her tightly braided bun.

The past several months had been difficult, and she’d had little sleep. The suffering of her people weighed heavily on her. Mining Ship 9 had a malfunction in one of its storage bays while on an Ĩ-type asteroid pulling out much-needed water, nickel, cobalt, and platinum. One hundred and fifty people died that day.

She perused her terminal, chairs, conference table, and sofa. At times her office was claustrophobic. It’s bigger than what most of my people have. She gathered her scattered thoughts and sipped from the now warm cup of tuma.

Faa was curled up on the couch. Their gazes met, and a comforting smile filled his face. He closed his big green eyes and nestled his gray, fur-covered head onto one of the sofa’s pillows for a nap. His tail shifted gently back and forth.

They’d been inseparable since he was plucked from the wreckage of Agricultural Ship 15 ten years ago when he was a seyas. Perhaps a month old. She had been consoling survivors and reviewing the damage. Twelve people died that day, including her sister-in-law.

Faa still suffered from nightmares, but he had always been a sensitive cádo. If he could communicate his pain and fear better so she might help him, maybe it wouldn’t bother her so much, but the cádo were limited in that manner. She always considered it so unfair to them, particularly Faa.

Sighing, Mirtoff took a final swallow of her tuma, savoring the last of the now warm liquid, preferring it chilled as it should be, but unwilling to cool it again. The sweet, spicy flavors were still there, so the taste was pleasant enough. Turning her attention back to the chaos of her desk and the report-filled datapads, she rubbed her temple. The people and the cádo were weary of traveling through space. It had been too long.

If J’Veesa had intended Mirtoff and the Nentraee people to wander the stars, she would never have created their world, even if it was gone now. They had a home once.

They needed to find somewhere they could build a new life, a new world. They needed off these ships.

She glanced out the window again at the 450 ships carrying her people. How long would it take them to find a home?

Of course, there were other worlds and other civilizations, but none that fit her people and their needs. J’Veesa never meant for the Nentraee to be worshiped like gods; there was only one God, J’Veesa. Many names, yes, but there was only one.

They needed to either find a world void of life or one with a civilization they could work with and learn from. Their first choice was a world with equals on it.

What if they never found one? What if the ships stopped working? What if they were forced to do what some in the military had suggested? What if they had to take advantage of a lesser civilization? Or worse, what if…

“Enough,” she huffed and turned back to the reports.

Faa startled and glanced up at her. “Provider?” he asked in a soft murmur. His speech was poor but understandable.

He shook his head and settled back in his chair, his big eyes not leaving her.

She grabbed one of the datapads to review. Agricultural Ship 23 was still under repair, forcing the other agro ships to increase production and require rationing. Again. She sighed.

There was a chirp at the door. Odd. Is it that late? Faa’s eyes didn’t leave her, but his floppy ears perked up.

Her aide, Danu, was gone for the day. The lines of her mouth softened into a smile when the visitor’s image appeared on her desk monitor. She tapped a button on the screen, and then the door opened swiftly and Mi’ko entered.

“Vice speaker, tell me you’ve brought good news,” Mirtoff’s brows raised, and her lips pulled up at the edges. “Would you like a tuma? It’s a little warm, but it’s still good.”

Faa looked at the vice speaker; his eyes softened and his muzzle twitched. If anything happened to her or her family, she wouldn’t be surprised if he chose Mi’ko as his new Provider.

Mi’ko regarded her with his aging, aqua eyes. The wrinkles around his mouth turned up into a smile as he spoke. “No, thank you, Madam Speaker.”

He was still in his traditional gray suit. She wondered if he’d been home yet. His brown hair was neatly groomed and pulled back, past his shoulders. His lopsided tieback was coming loose, which allowed a few wisps of hair to fall free.

“I have news,” Mi’ko said. “The signals we’ve been studying have promise. We locked onto the frequencies, followed them, and found more transmissions.” He typed on his datapad and a three-dimensional holographic image lifted from the screen, revealing a small solar system. He pointed at the third planetoid, and it zoomed in. “I think this might be what we’ve been looking for.” 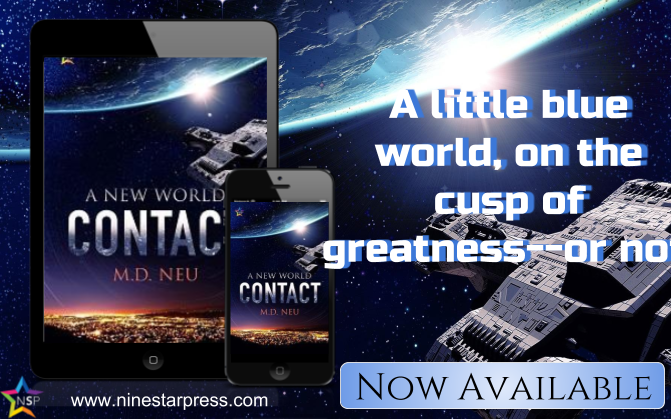 M.D. Neu is a LGBTQA Fiction Writer with a love for writing and travel. Living in the heart of Silicon Valley (San Jose, California) and growing up around technology, he’s always been fascinated with what could be. Specifically drawn to Science Fiction and Paranormal television and novels, M.D. Neu was inspired by the great Gene Roddenberry, George Lucas, Stephen King, Alfred Hitchcock and Kim Stanley Robinson. An odd combination, but one that has influenced his writing.

Growing up in an accepting family as a gay man, he always wondered why there were never stories reflecting who he was. Constantly surrounded by characters that only reflected heterosexual society, M.D. Neu decided he wanted to change that. So, he took to writing, wanting to tell good stories that reflected our diverse world.

When M.D. Neu isn’t writing, he works for a non-profit and travels with his biggest supporter and his harshest critic, Eric, his husband of eighteen plus years.