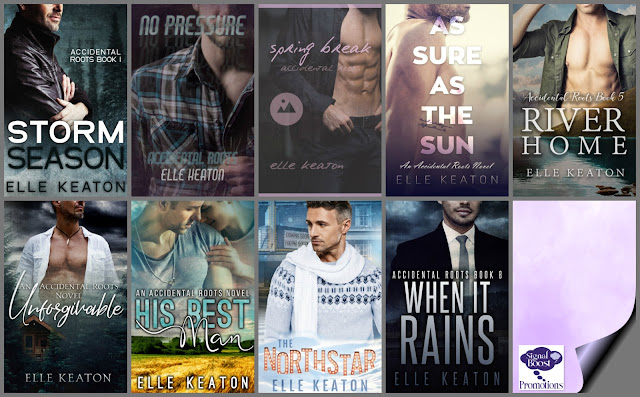 They say you can’t go home again, Adam Klay doesn’t intend to until the death of his father, a famous artist, forces his return to Skagit, Washington. Cleaning up his father’s chaotic life was never on Adam’s bucket list. Worse, Adam finds himself inexplicably drawn to the elusive, terminally-clumsy, gorgeous, Micah Ryan. No way is he getting involved with someone from his hometown, he’s always insisted the best view of Skagit was in his rearview mirror.

Micah Ryan has been coasting on auto-pilot since his family was killed in a car accident a decade earlier. He runs a web business and has an irritable cat. He hardly leaves his house, unless it is for his afternoon espresso. His world tips upside down when Adam Klay rolls into town. For the first time in years, he feels alive. Unfortunately, Micah’s return to the living has been noticed and is not appreciated.

Someone has a secret. Someone is exploiting the vulnerable youth population in Skagit. Teenagers are disappearing, young women turning up dead, the dirty secrets of Skagit are surfacing.

Home is where the heart is, right? Except when it's not. Not when you're afraid for your life.

Joey James has given up on finding his 'Prince Charming'. There is no such thing, he needs to be realistic about his chances of a lasting relationship. A chance encounter with a former school mate at the local grocery store changes everything-maybe. Before Joey can decide what to do about it, he is swept into a terrifying scheme. Forced into helping a dangerous stranger in exchange for his family's safety, Joey begins a perilous journey into the criminal underbelly of Skagit. He will do whatever is needed to protect his family.

Buck Swanfeldt had a secret crush on Joey James in high school. Social anxiety and a two-year age difference made it impossible for him to approach Joey then. Life since high school has been challenging. And lonely. Eight years later, fate brings them together and Buck decides to act. He utterly fails. He would have left it at that, except fate seems to be intent on pushing Joey in his direction, and clearly Joey needs someone at his back.

Dark, sordid secrets hiding in Skagit are bubbling to the surface, danger lurks in unexpected places. Buck has never been anyone's hero but something about Joey has him throwing caution to the wind. Together the two men take on a dangerous force greater than themselves. But sometimes our worst enemy is ourselves.

Sometimes a guy needs a break. Carroll Weir got one--but it wasn't what he expected.

All he dreams of is escaping dreary, damp Skagit, WA, for a warmer climate. Instead, Federal Investigator Carroll Weir is assigned to a cross-agency case involving geoduck smugglers and a very dead Fish and Wildlife Detective.

Sterling Bailey, the regular bartender at the Loft, likes to think of his customers and employees as family since he doesn’t have one of his own. Exhausted and tense, Carroll Weir wanders in one night and one thing leads to another. All in a night’s work, right?

Who murdered Fish and Wildlife Detective Peter Krystad? Does the killer have Weir in his sights? Things begin to heat up between them but Sterling and Weir will have to move past their personal history in order to change the course of their future.

The spark burning between them is hot enough to scald unless they’re careful somebody’s going to get burned.

The universe is trying to tell Sacha Bolic something. A fire escape collapses under him, he lands in crap, and a killer barely misses his target... all in the same few seconds. That's on top of a long list of mishaps and job dissatisfaction. Not one to ignore signals when they're shoved in his face, Sacha retires and uses his savings to buy an old building in Skagit, Washington. With a little help from DIY videos, he’s going to bring it back to its former glory. And, yeah, it’s a metaphor. If he makes one change, others will follow…

Seth Culver avoids entanglements, romantic or otherwise. Who needs them? He’s learned the hard way that people betray you or leave. Still, Seth finds people compelling. He kind of collects them, learning their secrets before letting them go their own way. His commitment to no commitments may have met its match in Sacha. Handsome and hot, Sacha seems to offer a permanence that scares Seth more than anything ever has. Seth will have to decide if he’s going to grab life by the balls or keep watching from the sidelines.

A box of inconsequential belongings hidden for decades in the old building hints at lives imagined but not lived, reminding them both there are no guarantees in love, or this thing called life.

If you don’t know what you want, would you recognize it if you found it?

Miguel Ramirez is the definition of pochos; a half-breed-white-washed Mexican–American who doesn’t speak Spanish (also unapologetically bisexual). Three years ago he arrived in Skagit a broken man having barely managed to escape an abusive relationship. Slowly, he’s rebuilt his life. He’s tried hard to discard his deepest desires and be happy with what life has doled out. Family feels out of his grasp, no one really wants to keep a stray after all. Except, maybe, a red-haired stranger with a galaxy of freckles covering his face who seems to encompass everything Miguel’s learned to avoid.

Nate Richardson; focused, solid, reliable, career-minded, Federal Agent. No time for relationships outside of work. Then he runs into Miguel with his crazy green eyes, rakish smile and outrageous sense of humor. Nate starts thinking about Miguel as more than just another guy. Nate was sure he didn’t care about sex and didn’t believe in love…he’d never met Miguel Ramirez before.

Things quickly heat up between Nate and Miguel. Crime is heating up in Skagit as well. Nate is sidelined when the case he is working on reaches a frustrating standstill. In the meantime, unnerving incidents transpire, some literally on Nate’s doorstep. Will outside forces—or their own baggage—keep Miguel and Nate apart? What exactly is family, and can Miguel and Nate make one of their own?

No one ever claimed it would be easy.

Running away from his messy divorce did not bring Ira Fragale the peace he sought. If he's going to get his life together, he needs to pull up his big-boy pants and take care of business. He's been hiding out in Skagit, licking his wounds, for two years now. Keeping his head down, except for the trail of twinks he's left behind. Something's gotta give.

Bartending at the Loft is easy, and Cameron McCulloch likes the friendships he's developed since his family rejected him, but he wants more. To get that, Cam needs to knock Ira off the pedestal he's placed him on. Ira's older, but that doesn't mean he has any clearer handle on life and the universe than Cam. Cam needs to focus on his own needs and forget about Ira, but he can't.

Ira didn't choose Skagit at random; decades-old events set him on the path he is on today. The mystery of his father's murder may never be solved, but Ira would like to lay his spirit to rest.

None of this explains why Cameron is suddenly the target of a series of hate crimes. The small town of Skagit has its share of trouble, but someone has it in for the LGBTQ community, and Cameron is directly in their crosshairs.

Rod Beton and Travis Walker have known each other almost all their lives; since the third grade when Rod was the new kid in town and Travis befriended him with Pokémon trading cards and a fruit snack. Apparently Rod’s easy. Since that day they've had each other's back's, bread and butter, biscuit and gravy...and so on.

Along the way, Rod fell in love with Travis. He's been hoping for some kind of signal from Travis that he returns Rod's feelings. When Travis announces his surprise engagement over Thanksgiving dinner Rod decides he's done waiting for the impossible. He packs his belongings and heads for Skagit and a new life. Even if Travis suddenly decided Rod was the man for him would Rod be able to put aside his insecurities?

Travis always knew he was destined to take over the family business. As the only boy he’s expected to take the helm of the Walker farming operation, and he’s good at it. An engagement to a local girl he’s pals with seems like the perfect solution, gets him mom off his back and ensures the family line -- eventually. When his best friend abruptly leaves town Travis’s eyes are finally opened to the difference between what is expected of him and what he could expect for himself.

The holiday season can’t be over soon enough for John Hall. His ex-boyfriend emptied the bank accounts and ran off with his personal trainer months earlier leaving John unable to pay his creditors. Now he’s forced to close the independent movie theater he runs, a bad end to a bad year. Gay, single and closer to fifty than forty, John doesn’t see a lot of hope in his future. In the dark of night he wonders if staying afloat is worth the effort.

Chance Allsop made a promise to his dying mother he hopes he doesn’t regret. Ten months after her death he’s finally in Skagit Washington, visiting the old movie theater where his parents met and fell in love decades ago. The whole thing seems like a lark until he lays eyes on the handsome owner. With his mother’s spirit at his back Chance fully intends to win John Hall’s heart.

Beto Hernandez’s objective: Break the human trafficking ring plaguing Skagit once and for all. He’s not in Skagit to make friends—he's kicking ass first and taking names later. Maybe. He crosses paths with an intriguing and sexy man, the first in years to spark Beto’s interest. It’s ultimate bad timing, though; no one in Skagit can be trusted.

Who is Carsten Quinn, and where does he fit in Beto’s investigation? Beto tries to stay away from Carsten but their undeniable chemistry keeps him close.

Carsten Quinn survived years in hell to return to “normal life,” and he has his own mission in Skagit. The only problem is he’s hiding, not living anything like a normal life. When his closest friend is severely injured it’s up to Carsten to finish gathering evidence to put some very bad people behind bars and he knows all too well he can’t trust anyone, especially not the law.

Ironically, the law appears anyway, in the form of a sexy cop he can’t stop thinking about; when Carsten’s past comes back with a vengeance, he has no one else to turn to.

Is happiness too much to hope for? Are Beto and Carsten too different and too broken to trust anyone, much less each other? 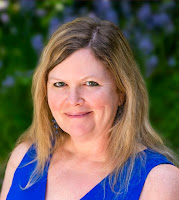 Thanks for stopping by, I’m Elle Keaton and I hail from the northwest corner of the US where we are known for rain, rain and more rain. I write the Accidental Roots series, set here in the Pacific Northwest featuring hot mm romance and the guarantee of a happy ending for my men. They start out broken, and maybe they end up that way too, but they always find the other half of their hearts.

I started writing way back when but only began publishing about two and a half years ago and now have nine books out. Each features a couple in my little universe, sometimes there is added mystery and suspense.

Thank you for supporting this Indie Author,