Change of Plans by Riley Long - Release Blitz with Excerpt 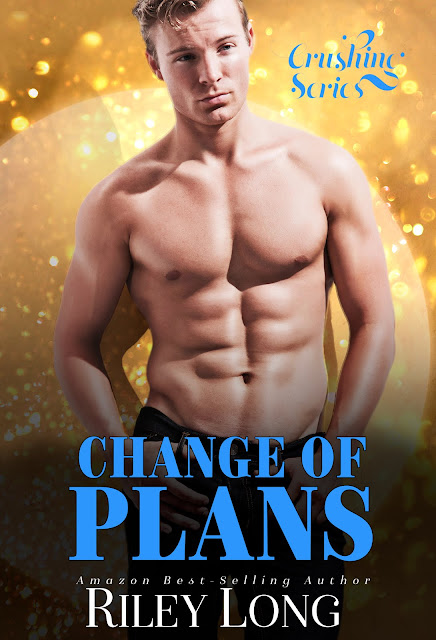 Even the best laid plans can go wrong...

Jared Costa is a touring backup dancer for one of pop music’s hottest up-and-comers. He’s also harboring a crush on his sexy-as-sin dance partner, Corey, who is tragically straight. Jared's plan to make it through another month of the tour without acting on his desires should work, if he doesn't let his hunger for Corey get the best of him. Once the tour is over, they will go their separate ways and Jared can put this foolish crush behind him for good.

Corey Miller put his same-sex attraction days behind him in college. Staying away from entanglements is the key to the big plans for his career and making a name for himself as a dancer. Or, that was the plan, until a game of beer pong ends in a kiss--with his luscious dance partner, Jared. Corey's spun off center, unable to regain his balance. After their hot-as-hell kiss, he’s questioning if fame is all he wants, or if what he needs is something--or someone--else.

With both their plans crumbling, can they abandon those and devise a new plan? One that holds them together, instead of tearing them apart?

Jared paced backstage, only half-listening to the house music blaring overhead and the screaming of the impatient fans in the stands. Behind him, Ben and Zach from Addicted Fling were shit-talking one another. The guys who made up Addicted Fling were fine when they were offstage, but their pre-show bravado grated on Jared’s nerves. So did the band’s name, for that matter. It all seemed to scream “trying too hard,” but that was none of Jared’s business. At least the music wasn’t terrible. Jared spun to continue his pacing.

The stage manager was working his way towards Jared, Corey—the other backup dancer—close behind. Jared’s heart thudded. Corey was … well, he and Corey were friends—or at least, Corey would probably claim that—but if Jared had his way, they’d do so much more than dance. As a result of his unrequited crush on the straight guy, Jared tried to keep Corey at an arm’s length. It was hard—blond, muscular Corey was exactly Jared’s type, with deep-set green eyes and a face full of stubble. Jared wanted to be wrapped up in the man.

Jared stopped his pacing and nodded. “I know.”

Neil adjusted his headset and paused to listen carefully. “Three more songs and you’re up.”

Jared huffed out a little laugh. “Yeah, Neil, I know. We’ve been doing this for a month.”

“This one’s important, though,” Neil said, as if Jared needed a reminder. “There are a few recruiters watching tonight, so people are going to be paying attention. This could be the next step in your career.”

A lump formed in Jared’s throat. He didn’t know if dancing backup for various pop stars was what he wanted to do for the rest of his career. He really wanted to teach and choreograph. That didn’t mean he was going to screw up on purpose, but he certainly wasn’t trying to impress recruiters. He nodded. “Gotcha.”

Corey barked a laugh and clapped a hand on Jared’s shoulder. “Or like her lead dancer is checking out your ass.”

Jared’s face flooded with heat. He never knew how to respond when Corey made an offhanded remark about sexuality—either of theirs. Jared fidgeted, working his hands into fists at his sides, and looked at his shoes, forcing a laugh.

A few minutes passed while Corey and Jared helped each other stretch before it was their turn to go on stage. When Neil gave the cue, they hurried to their mark on either side of the stage. Jared couldn’t tear his eyes away from Corey. He imagined Corey coming closer, pulling Jared into a kiss, and then he heard the music start up, forcing the stage back into focus.

Jared waited for his cue before rushing onstage, but he couldn’t stop watching Corey, and he stumbled a little, his heart pounding. He was acutely aware of the crowd. This was a sold-out show, one of the biggest he’d ever performed. Morgan, the pop singer he danced backup for, had gotten lucky with this tour, landing an opening gig for one of the biggest rock bands in the country, and—

“Cincy, how you doin’ tonight? My name is Morgan Palmer, and I am soexcited to be here with you! Welcome to the Crushing Tour!” Morgan screamed into her mic as the song ended, cutting through Jared’s thoughts. The crowd went nuts, screaming back at her. She had won the hearts of hundreds of thousands of people on this tour, and every night her songs worked their magic on a fresh batch of new potential fans. “Give it up for these beautiful boys, my dancers, Jared and Corey.” Once again, the crowd cheered. Jared sneaked a glance at Corey, his light skin shining with sweat under the hot lights already.

Riley Long is a wife and mother living a quiet life in Virginia, with her husband, son, and two energetic pit bulls. She passes her evenings writing, reading, and watching bad television (or not so bad television). For fun, Riley participates in NaNoWriMo, GISH, and reads with her book club, the BAMFs. She likes things with silly acronyms. The craziest thing Riley has ever done involves whipped cream and hugs.

Follow the tour and check out the other blog posts here

➜ Sign up to become a tour host here