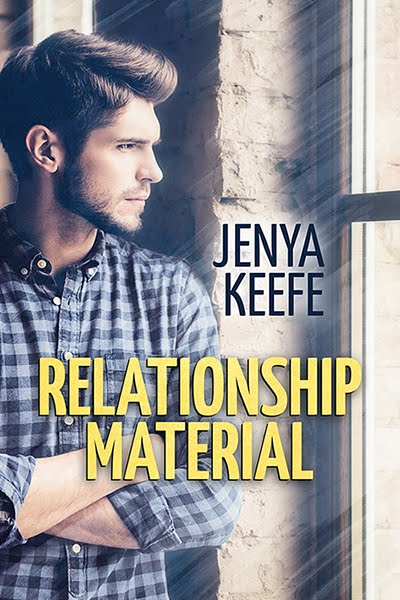 Hi, I'm Jenya Keefe. Welcome to my blog tour! I've been writing for my own pleasure for too many years to count, and now my first novel is being published by Riptide Publishing! It's called Relationship Material, and I'm delighted to talk with you about it.

Relationship Material is about a guy who had a terrible childhood and suffered a violent assault when he was a teenager. He suffers from PTSD and chronic anxiety, and though he functions well enough in society, he doesn't feel worthy of the love offered him. It's about Portland, the love of a good dog, learning to be brave, and being open to joy.
About Relationship Material
It's not always possible to meet in the middle.
Registered nurse Evan Doyle doesn’t consider himself fit for more than occasional hookups. He has a good life, but the emotional aftermath of a horrific crime makes him feel too damaged to date. So when his sister’s hot bestie, Malcolm Umbertini, comes on to him, he turns him down flat. Mal is Relationship Material: the kind who thinks in the long term. What would Evan do with a man like that?
As a prosecuting attorney, Mal’s learned how to read people, and he knows there’s more to Evan than meets the eye. Mal has faced his own hardships since his family kicked him out as a teen, and he respects Evan’s courage and emotional resilience. More than that, he wants Evan—in his bed and in his life. But can he weather another rejection?
Both wary, they agree to a no-strings fling. Mal knows that Evan wants things to stay casual, but he’s falling in love a little more with each encounter. With health, happiness, and bruised hearts on the line, Mal and Evan must risk everything for love.
Now available from Riptide Publishing!

About Jenya Keefe
Jenya Keefe was born in the South. She has an advanced degree in European history, and has spent much of her life working the kinds of jobs a history degree qualifies you for: gift shop employee, lumber grader, classifieds clerk, hot glass artist. She currently lives in the Seattle area, where she works at a library. She has always written stories.
Website: www.jenyakeefe.com
Twitter: @JenyaKeefe

Pre-order Jenya’s next release, The Musician and the Monster, coming September 30th from Riptide Publishing!
Giveaway
To celebrate this release, Jenya is giving away a $15 gift card to Powell’s City of Books! Powell’s is an independent bookseller located in Portland, the setting for Relationship Material. Those not in Portland can shop online. Leave a comment with your contact info to enter the contest. Entries close at midnight, Eastern time, on August 10, 2019. Contest is NOT restricted to U.S. entries. Thanks for following along, and don’t forget to leave your contact info!