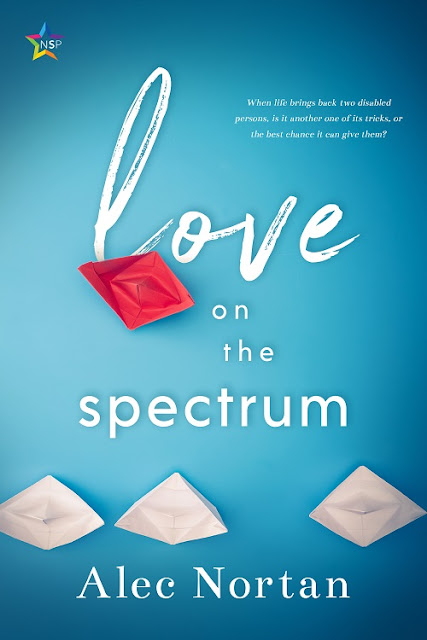 
Hervé has Asperger’s, a specific kind of autism that makes him unable to interact with other people.

Luc has been severely scarred by fire and flees human presence to avert the way people glare and frown when they see him.

It was impossible for them to meet, but life sometimes likes to cheat the odds. Is it just a trick or a way to bring together two men who could be each other’s lifeline?

Love on the Spectrum
Alec Nortan © 2020
All Rights Reserved

Chapter One
During their life, everyone meets thousands of people. Some of these encounters are fleeting, like the person you ask for directions in the street, and others last a lifetime. Each of them, as short or as long as it is, can change your life for the better or for the worse.

I’ve encountered maybe two hundred people. And that’s with a generous margin for error. A very generous margin. And yet I’m thirty-four and should have met a lot more. If I haven’t, it isn’t because I don’t want to, on the contrary. If I only consider the meaningful encounters, well, I’m down to a figure I can easily display with my fingers. The last one took place two years ago. His name is Pascal, and he made my life better. A whole lot better. We met through the Internet, the way of getting in touch with people I’m most comfortable with. Taking our time, we got to know each other, and he became an important part of my life. It wasn’t always easy for him, but he managed to accept my difficulties, and for the first time in my life I discovered what being in a relationship was really like. We weren’t quite ready yet to live together, but we were getting close.

And then, six months later, he dumped me. There was no fight, no argument, but it devastated me all the same. My problems had eventually gotten too tiresome for him. He simply couldn’t cope anymore, and I don’t think any less of him for that. Living with someone like me isn’t always easy. Quite the opposite. He had done all he could, but it hadn’t been enough.

My relationship with Pascal helped me understand one thing: I will spend my life alone. I’m not being dramatic; it’s just a simple observation. Even I can’t bear myself at times. If I can’t, who could?

What is my problem? To make it easy to understand, let’s say I am unable to interact with people. It probably sounds stupid put like this, but when sarcasm, irony, implied speech, and body language—well, all those elements that allow a conversation to take place—are completely foreign to you, a simple discussion with another human being can be quite hazardous to negotiate. And if on top of that you really cannot stand physical contact and noise, like me, you’re on a slippery slope toward the deepest pit of hell. I begin to slide as soon as I have to say hello…

When I say I have autism, in a desperate attempt to evade embarrassing situations, here are some of the answers I usually get:

Or the most common reaction:

No, I am not Rain Man, and most of the people who suffer from the same problem—Asperger syndrome—don’t have any kind of superhuman capabilities. And you can’t cure it. It would be like asking a one-legged man if he can be cured. No, it’s just a part of me. That and the fact you can’t see it when you look at me only makes it more difficult for people to understand. A one-legged man doesn’t have to explain that he only has one leg. A white cane or a service dog is usually enough for a blind person to be recognized as such.

I always have to justify myself.

Luckily for me, I’ve been going to a psychologist once a month for years. His specialty is autism, including Asperger syndrome. He helps me learn all those social rules that completely elude my grasp, and cope with my difficulties.

But it’s also because of him I’m standing here.

It’s a fine day. The weather is nice, the street is mostly empty. Although it’s almost noon, a few people pass by, and they walk purposefully, taking no notice of me except to avoid me. I’m standing still, almost stuck to the wall behind me, a white-stone building blackened by years of pollution. The sidewalk is barely wide enough for two people and gives way to a long line of parked cars and then a two-way street. On the other side is the same chain of cars, the same sidewalk, and the same dirty façades.

Despite all this, this part of the city welcomes lots of tourists, but this particular street is a little too far from the main avenues and the famous monuments to get their attention. If it were to be described by a saying, it would be “a secret life is a happy life.” Maybe that’s the reason why I like it. Because it likes to stay hidden. Just like I do. And this is definitely one of the reasons why I’m standing here right now.

The other reason is the small restaurant facing me. I’ve been looking at it for a little while now. The frontage isn’t very long, but a wide French window occupies almost all of it. Painted on the glass, blue letters spell out the words “The Scullion Restaurant–Traditional Cooking”. The text isn’t perfectly centered. It is about three inches too high for that, and the “C” and the “U” of Scullion are slightly too close to each other. The first “T” of Restaurant is also slightly tilted.

I am pretty certain no one else notices these imperfections, but they kind of jump out at me. I wonder if I shouldn’t have chosen another place.

But I’ve thought about this choice for a very long while, and I’ve even had to negotiate bitterly with my psychologist. The objective of the test is simple enough: having lunch at a restaurant. But he knows me too well to stop at such a simple goal. Without any further rules, I would have chosen the worst restaurant in the city, in a deserted part of town, to make sure there would be as few other clients as possible. I would even have gone in the early afternoon, when all the NTs have long since finished their meal—NT is short for Neurotypical, “normal” people as opposed to Aspies, the nickname for people like me with Asperger Syndrome—to have the greatest chance of seeing no one else other than the waiter, which is quite enough for me.

Knowing if he let the reins go I would choose an empty restaurant, which I have to admit would have rendered the exercise moot, my psychologist fought hard until we reached a compromise (more acceptable for him than for me) and chose a popular but small venue and a “normal” lunchtime.

This negotiation took place two days ago, and I’ve been anxious ever since. This morning, I woke up with my insides twisted. I almost broke into tears thinking about having breakfast alone at my place because it reminded me that my next meal would be a trial. When I was about to leave home to come here, instead of opening the door, I was sorely tempted to make sure it was safely locked and go hide in my bedroom under my blankets.

But here I am, in front of the restaurant. Inside, I feel like a gelatinous blob mounted on a drill. I still evaluate the chance of my running away before the time comes to enter at one in two.

I take a look at my watch.

My psychologist made the reservation—one of his dirty tricks to prevent me from bailing out—for one o’clock. He knows perfectly well I can’t stand lateness (or earliness) or an appointment cancellation without calling beforehand, and, as a consequence, I would never do that to someone else.

It’s too late to call the restaurant and cancel now. I stifle an emerging sob and move to the pedestrian crossing on my right. There are no cars passing, but I never cross a street elsewhere.

Just like every time I’m nervous, I’m tempted to embrace my old habits again. Right now, this means not stepping on the white paint of the crossing. I don’t know where I got that from, but it took me several sessions and a lot of training to be able to ignore the color of the ground I walk on.

I bite my bottom lip and stare straight in front of me so I can’t see my feet. I reach the other side of the street without further ado and walk the short distance to the entrance of the restaurant.

I open the door with a racing heart and step into my worst nightmare: a crowded public place. 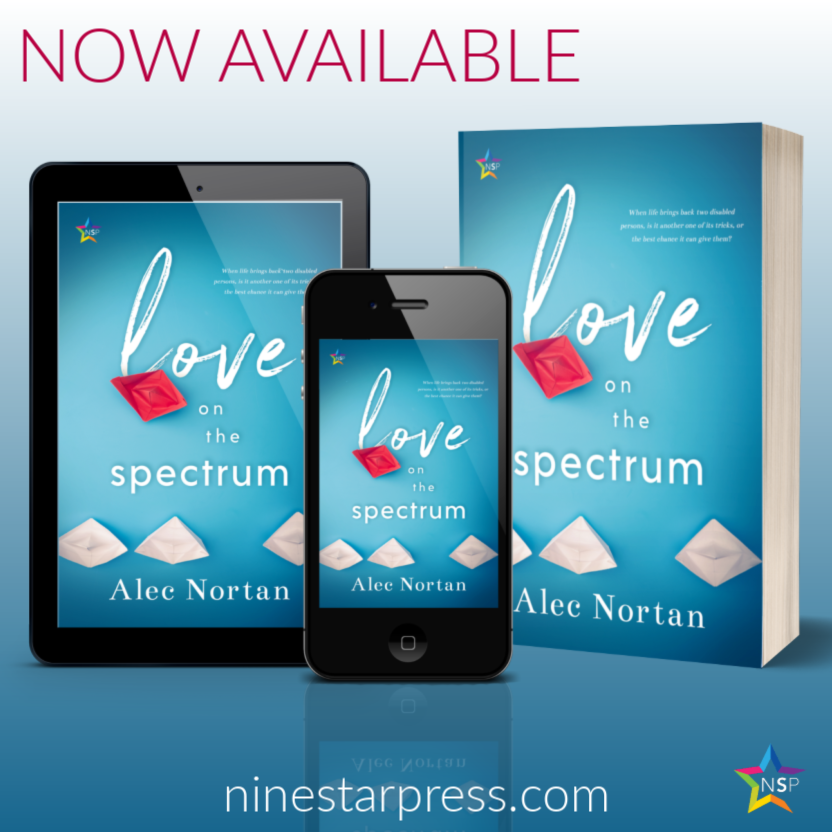 Alec Nortan is a French social services worker. Though he learned English at school, he chooses this language to write in. His works are gay-related fictions, varying from young adult, science fiction or fantasy adventure, to romance.