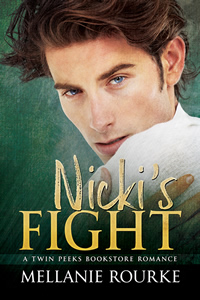 A lifetime of abandonment leaves its mark on a person. So much so that when Nicki left, it made a twisted sort of sense. After all, everyone else I had loved in this world had left me, why should he be any different?

Six years later and he’s back in my life. He’s still the same Nicki. Still the same sensitive, intelligent, loving and compassionate man he was years ago. Except…there are shadows in his eyes that were never there before. How do I love him again, trust him again? If he disappears now, there’s no way I’d survive.

I love Kaine Devereaux. I always have. But sometimes love just isn’t enough. When my family moved thousands of miles away to chase the dream of a cure for my mysterious illness, Kaine and I had no idea that more than distance would end up separating us.

How do I ask Kaine to trust me again when I almost destroyed him? How do I ask him to love me again, when I’m still haunted by the specter of my past?

Nicki’s Fight is a M/M Romance with danger, heat, and a snarky cat who saves a life. This story does include explicit sex scenes and descriptive domestic abuse. Please pay heed to the Trigger Warning: Scenes of domestic violence and abuse 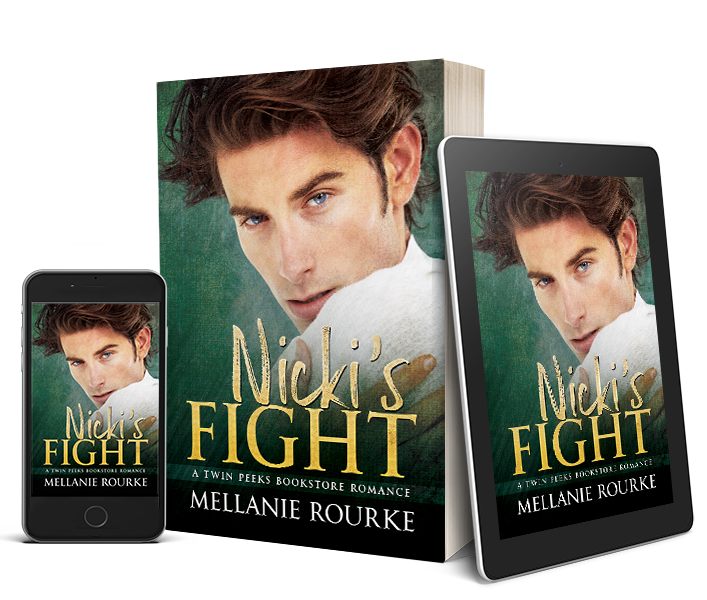 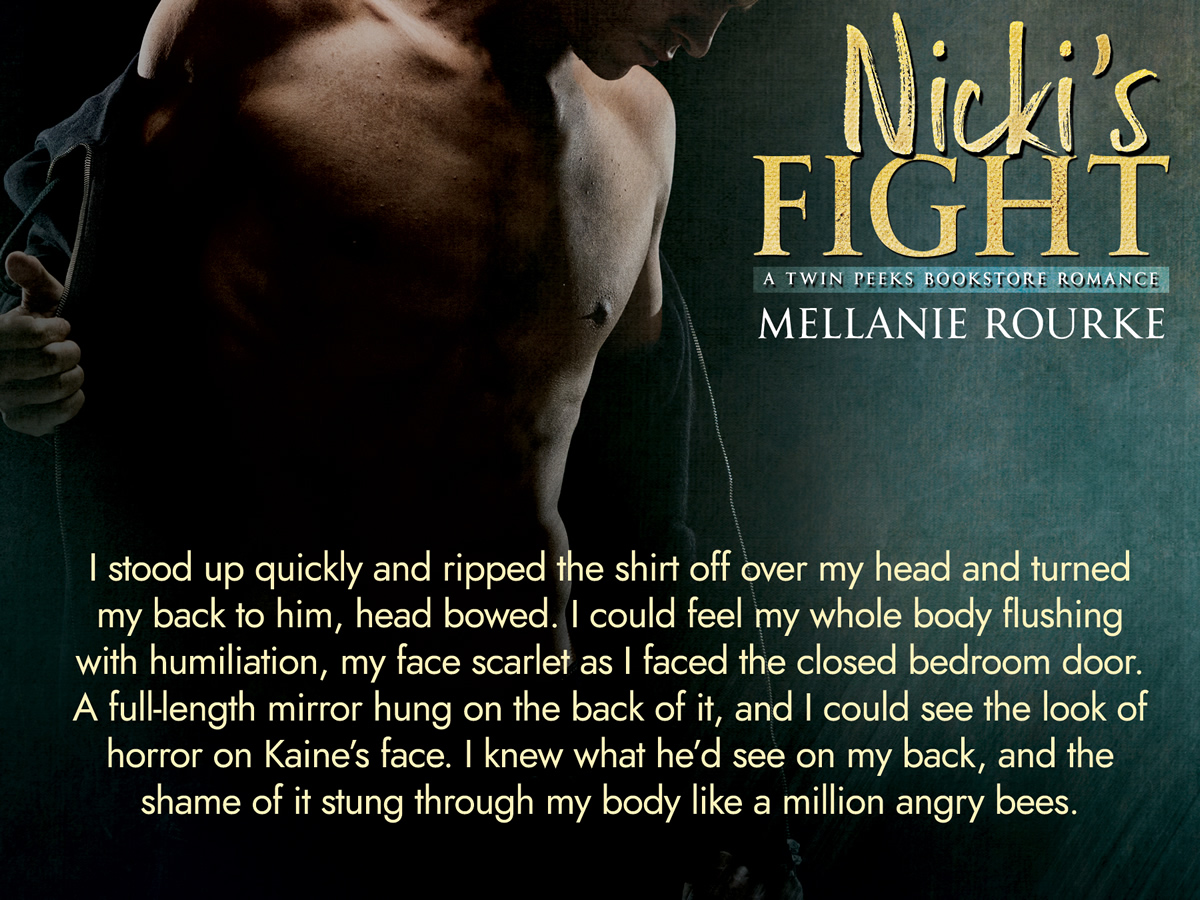 “Nicki… What happened?” he asked. “I can’t help but feel like there is something major you haven’t told me. Something more than just your parents breaking up kept you away for six years.”


Through the dark storm raging in my head, a little voice tried to convince me that I could tell Kaine the whole story, that he’d understand what I’d done to protect my mother. To protect him. That voice was drowned out by the flood of vile words I’d absorbed from my father like a sponge.


I made it to the door before I was able to force myself to stop running. I leaned against it, shaking my head in the vain hope that I could shake off the sound of my father’s voice. I saw my palms flat against the wooden door, the hated tattoos staring at me.


How was Kaine going to react when he found out about the deal I’d made with my father? Would Kaine agree if he knew my dad hated me? What if he thought being sick was some kind of punishment, that I was an abomination? A worthless waste of human flesh, who had caused my parents to split and humiliated my father…


I felt like I was standing on a precipice. To either side of me a yawning chasm that threatened to swallow me whole. My terror of Kaine’s judgment made the breath in my lungs freeze and I stood leaning against the door. Then I felt it… a touch, feather light, gently running over my back. I tried to pull away. I didn’t want him to feel my scars, to know… Fuck!


To know how fucking weak I was.


I made myself turn back around and I took a deep, hoarse breath that turned into a cough that rumbled through my chest. Nausea swirled in my gut as I tried to get the words out, to tell him what had happened…


“I—My dad, he— he was—” I saw Kaine’s eyes narrow and his jaw clench. I tried to choke out an explanation, but the words still wouldn’t come. I felt the censure in his gaze. “Fuck, Kaine! I’m so sorry…” I doubled over with a sob, my hands grabbing my hair in a punishing grip, the pain anchoring me in the midst of my emotional storm.


I couldn’t speak, just shook my head wildly in frustration as Kaine tried to talk to me, but the words were just noise roaring in my ears. I couldn’t get the words out to tell him, so I did the only thing I could do. I showed him.


I stood up quickly and ripped the shirt off over my head and turned my back to him, head bowed. I could feel my whole body flushing with humiliation, my face scarlet as I faced the closed bedroom door. A full-length mirror hung on the back of it, and I could see the look of horror on Kaine’s face. I knew what he’d see, and the shame of it stung through my body like a million angry bees. I’d seen it hundreds of times in my own mirror.


Sound returned slowly, and I heard him gasp as he saw my back. Then I heard a whispered, “What the fuck…”


I just shook my head as I showed him my secret, my shame.


If I’d just done better, been better, Dad wouldn’t have done it. If I hadn’t been gay, I could have been a better son, a better man, and he wouldn’t have been pushed to this extreme. It was all my fault.

It’s very strange to me to find myself writing explicit romance novels. Strange, but wonderful!

I was raised in a very conservative religious home. My family didn’t discuss sex. At all.  Mom never talked to us about puberty or anything like that. My oldest sister scandalized the family when I was thirteen by getting me a sex ed book from the library because I had started my periods.

Even the sex ed class at my school was sex shaming.  The name of the class was “BFM&RE”. I kid you not, they couldn’t even call it “Sex Ed”. It was “BFM&RE”.  The name came from the Bible verse “Be Fruitful and Multiply and Replenish the Earth.” Sex, you see, was only between a man and a woman, and only to follow God’s command to have babies. There was no joy, only duty. There was no pleasure, only obligation.  Heaven forbid you even consider discussing same sex relationships!  That was beyond the pale.  Orgasms were especially forbidden! Nobody discussed them.

While it did teach the mechanics, the conversation was hushed and filled with embarrassment, and everything was cloaked in a layer of religion that made you ashamed of even thinking about enjoying sex.

To find myself now, thirty-five years later, not only writing explicit romance novels, but same sex relationship novels, gives me a great deal of joy. I feel like I’ve shed the smothering layer of fear and embarrassment gifted me at birth to enter a world filled with love.  I refuse to be shamed anymore.

She has been writing since she was a child but never had the impulse to publish until she was introduced to the world of MM Romance.

Now her husband has to put up with a variety of new ways to say "penis", and her children aren't allowed to tell their teachers what she writes.