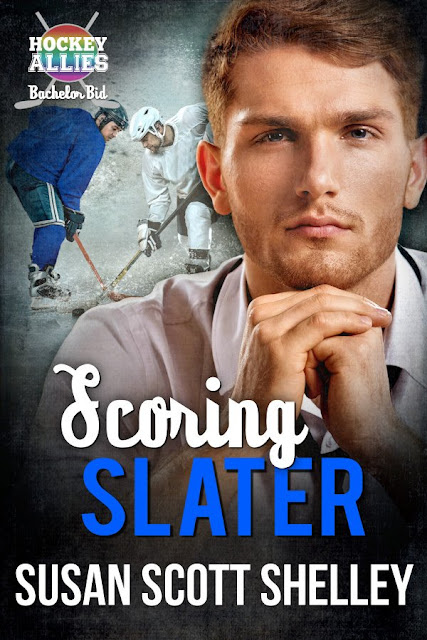 Slater Knox is known around the league as the tough enforcer for the Buffalo Bedlam. His popular social media accounts and open relationship with the fans have made him one of the most beloved players in hockey. They've also earned him a spot in the All Star game, and an invitation to be a bachelor at a charity auction. For all his living in the spotlight, he's hiding a secret... He's in love with his best friend and keeping quiet grows harder each day.
​
Noah Alzado is the newest addition to the team, and has spent the last few months joined at the hip with his best friend Slater. Slater is everything Noah wants, but won't let himself have. They are best friends, roommates, and teammates, that's three complications too many. Plus, Noah guards his private life as fiercely as Slater shares his own. His best option is to keep his head down, help his team win, and not do anything stupid... like kissing Slater again.
​
Everything comes to a head during All Star weekend, where the best in the league compete for ultimate bragging rights, and at the auction, where temptation is hot enough to melt the ice. The chemistry between Slater and Noah is scorching, but can they lower their defenses enough to make a play for love?

USA TODAY bestselling author Susan Scott Shelley writes stories with heat and heart, where love always wins. Her romances give readers lighthearted and emotionally satisfying escapes into happily ever after. In addition to crafting stories, she is also a professional voiceover artist and enjoys lending her voice to a wide range of projects. She lives in Philadelphia with her husband and is an avid fan of her hometown sports teams. Her favorite things include running (honestly, it's more like jogging), sports (especially hockey), hard rock (but will listen to anything from heavy metal to show tunes), and things with elements of whimsy. Get in touch with her at http://www.susanscottshelley.com.