Freedom by E. Davies - Release Blitz with Excerpt and Giveaway 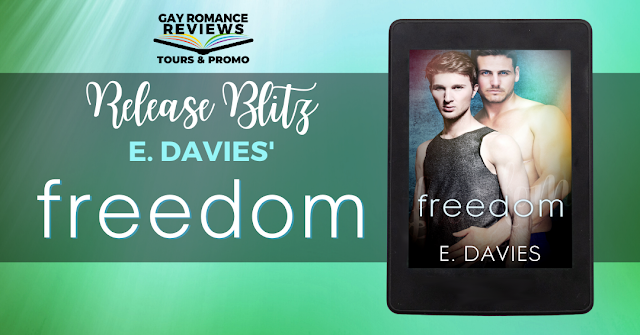 Agoraphobe Jaden has barely left the house in years. Being dragged to a gay bar by his big brother to bid on a blind date is not his idea of a good time. But then the unthinkable happens: he wins. Sure, he was just about ready to push his boundaries--but on his own time. Not with a probably-gorgeous stranger watching his every move.

Henry hasn't been on a date in the last year--ever since he finished with lower surgery. He works as a nature guide now in the great outdoors, and his new life suits him just fine. Just one thing's missing: a man to share it with. Jaden is sweet, accepting, yet terrified by everything about the date that isn't Henry. But he sees something in Jaden--in his courage for showing up, and his hope and vulnerability along the way.

Back home, when he's in Denver in between guiding trips, Henry quickly becomes a staple in Jaden's home. With Jaden's understanding, Henry grows confident in his own skin. And with Henry's support, the walls of Jaden's sheltered life open up. But every step forward seems like it comes with two steps back. Can they take a deep breath and step into the wide open future--together?

This novel is based on "Denver" -- a short story from the Heart2Heart 2 anthology. It has been revised and significantly expanded. It is now a standalone gay romance novel with a happily ever after ending and no cliffhanger. 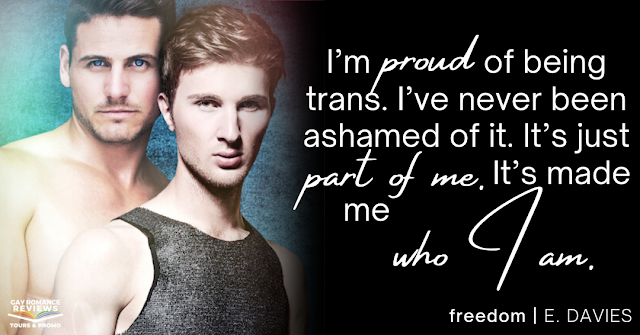 “Hi yourself,” Henry answered, his voice a low, smooth shiver straight to Jaden’s toes. Then he straightened up and smiled, hefting the bags. “I have Chinese. And I bought groceries on the way, too. Hope you don’t mind.”


Oh, God. Jaden’s cheeks burned with surprise as he opened his mouth and failed to come up with words. When he did, he squeaked and cleared his throat. “Um—no. I mean, thank you. That’s really… super sweet of you.”

Henry chuckled softly. “It’s my pleasure.” The distinctive smell of fried rice made Jaden’s stomach grumble again. He blushed, but Henry just laughed. “Shall we eat?”

“Let’s,” Jaden agreed. He beamed and led Henry to the kitchen to grab plates and utensils.

He took the grocery bags from him and then hesitated, spotting the red mark on Henry’s hand. “Are you okay?”

“Oh, that? I’m fine,” Henry said with a laugh and kissed Jaden’s cheek. “Thanks. I’ll get these to the table.”

Watching Henry covertly check out the place made Jaden see it with fresh eyes—as much as he could when he knew every inch of the apartment better than anywhere else.

It was cozy, but the view was gorgeous. Green parkland rolled into hills and then the mountains that always hovered on the edge of the Denver consciousness. It more than made up for the cramped living room space.

Jaden dipped into the kitchen, which was tucked away in an alcove off the living room, to put away groceries. He found himself smiling at Henry’s choices. He’d filled one bag with fresh veggies and a bottle of juice, and another with milk, butter, cheese, and pasta. The third had eggs, bacon, and chicken breasts.

Oh, man. There was easily enough for a week, but Henry hadn’t broken the bank on gourmet groceries, either. It told Jaden so much about Henry: he was sensible and frugal, exactly the sort of practical man he wanted in his life.

Okay, stop mooning over cheddar cheese and get the damn plates, Jaden told himself, grinning and shaking his head.

When he got to the table and set down the plates and utensils, Henry already had the cartons arranged and open in the middle of the table. He dropped into his seat and grinned as Jaden sat, too. “Come on, dish up what you want.”

“But what I want isn’t on the menu.” Jaden’s eyes sparkled as he beamed over the table at Henry, his heart already flip-flopping with the tension in the room between them.

One sweet kiss was nice. But he wanted a lot more. The last few nights, he’d missed Henry’s company—to a ridiculous degree, considering they’d only ever spent that one night together.

Henry grinned back at him and held his gaze. “I haven’t shown you the dessert menu.”