The Speakeasy Series by K. Evan Coles and Brigham Vaughn - Blog Tour with Excerpt from Straight Up and Giveaway 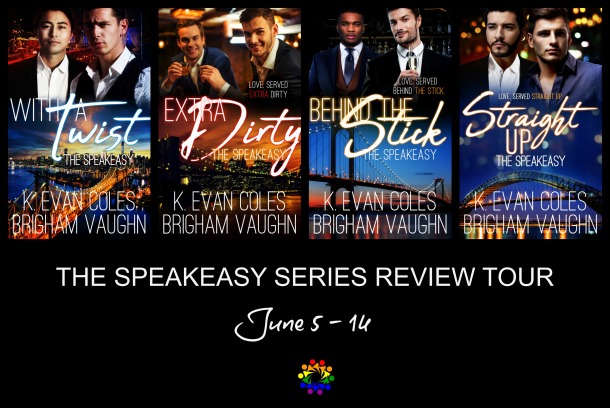 Media mogul Jesse Murtagh and bartender Kyle McKee decide to go into business together and open Under Lock & Key, a speakeasy on the upper West Side of Manhattan. The bar, with its secret passphrases and craft liquor cocktails, becomes a sanctuary for Jesse and Kyle’s circle of friends, who gather once a month to catch up with each other and share their experiences.

Under is both hang out and haven for the men who spend time within its walls and their friendships build family ties that are sometimes missing from their own lives.

The stories can be read in order or as standalones.

Book Title: With A Twist (The Speakeasy Book 1)


Love, served with a twist.

Nursing a broken heart when his ex-boyfriend, Riley, leaves him for the love of his life, Carter, Will Martin throws himself into teaching at NYU and writing. An invite from Riley to a speakeasy called Under helps Will begin to heal, and he finds himself enjoying both the drinks and the company.

Soon after, he’s shaken by news of his father’s cancer diagnosis and Will reluctantly returns to Long Island to see the man who disowned him after he was outed.

Sparks fly when Will meets his father’s mentee, Republican Senator David Mori, who is both mixed race and openly gay. Will is looking for a no-strings-attached fling and David is leery of getting involved with his mentor’s son, so they keep their affair a secret.

As his father’s health worsens, Will elects to remain in Garden City and his relationship with David grows beyond casual sex. Now, both men must decide how to bridge the divide between them. 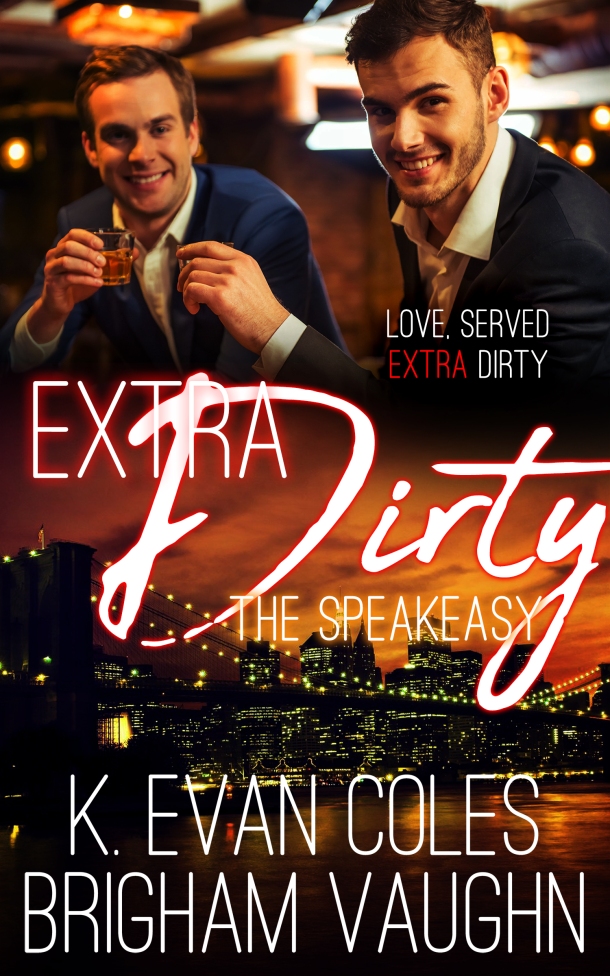 Blurb
Jesse Murtagh loves his life as a wealthy bisexual businessman dedicated to the pursuit of pleasure. With a circle of friends he trusts implicitly, he enjoys a successful career in his family’s business and as co-owner of Under, an uptown speakeasy, with his friend with benefits, Kyle McKee.

Music teacher and part-time DJ Cameron Lewis lives modestly in a DUMBO loft and isn’t interested in serious relationships. However, he’s always up for some casual fun.

Doing a favor for his friend Carter Hamilton, Jesse meets Cam and is immediately charmed. When Jesse discovers Cam’s other life as a DJ, he is further intrigued. Viewing Cam as a challenge, Jesse pulls out all the stops, but his usual methods to avoid serious relationships fail. Though Cam has no intention of becoming attached, he begins to fall for Jesse, unaware that Jesse’s feelings are changing.

Afraid of heartbreak, Cam pulls away, leaving Jesse bewildered and hurt. They remain friends until a series of misunderstandings widens the rift to breaking point. When Cam steps in to help Jesse through a family crisis, they realize they care for each other more than they’ve been willing to admit. Jesse and Cam don’t want a traditional relationship, but can they build a future that makes them both happy? 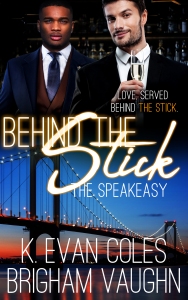 Book Title: Behind the Stick (The Speakeasy Book 3)


Love, served behind the stick.

Kyle McKee lives a charmed life. He co-owns Under, an uptown speakeasy, where he is chief mixologist. Friends poke fun at Kyle’s tiny one-bed apartment in Chelsea, but they’re the best support system a man could ask for. Unfortunately, Kyle’s lackluster love life has led him to take a break from dating.

Harlem resident Luka Clarke is a lieutenant with Engine 47, the Pride of Morningside, where he carries on his father’s legacy with the FDNY. Luka, who is mixed race and bisexual, has his eye on Kyle, whom he met at a local burger joint and he just needs to make time to visit Kyle’s bar.

Before work one evening, Kyle is trapped inside the luncheonette when a fire breaks out. Luka’s firehouse answers the call and he connects with Kyle again under the most unexpected of circumstances. When Kyle gratefully invites Luka and the firehouse squad to Under, the flirting between the two men leads to a date.

Kyle and Luka quickly grow close, but Luka’s mother and sister distrust Kyle for being both white and gay. Luka believes his family will come around and accept Kyle in the end, but Kyle is not optimistic and hides his disquiet as attraction blossoms into love.

Kyle and Luka’s near-idyllic bubble is shattered one evening after a hate crime leaves them scarred, inside and out. Shaken, they put on a strong front but struggle inwardly against fear and personal demons. As the emotions seething beneath the surface finally come to a head, both men must decide if they have the strength to find love enough to conquer hate.

Reader advisory: This book contains references to non-nurturing parenting; homophobia; racism and racist slurs. There are references to recreational drug use. This book also contains scenes of mmmm ménage and characters caught in fire. 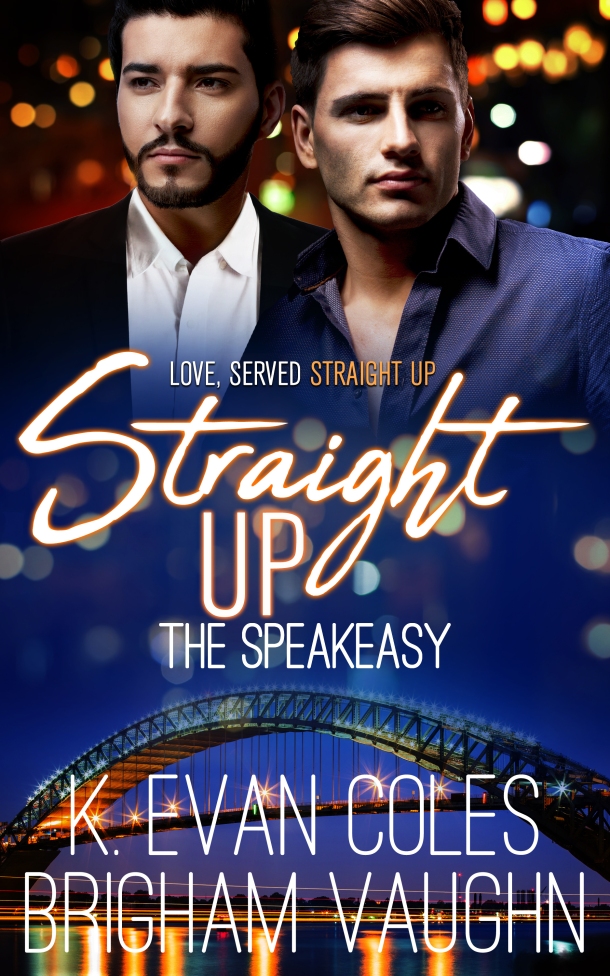 This book can standalone or be read as part of the series.

Malcolm Elliott has been keeping secrets. Helping his mom through a financial crisis has nearly emptied his bank account and his kitchen cupboards, despite his thriving career with Corporate Equality Campaign. Malcolm is also bothered by his inability to tell the most important people in his life that he identifies as gray ace.

Stuart Morgan has a secret of his own. Though years have passed since the tattooed chef fled the Mormon church in Utah for New York, he’s never truly come to terms with the kink that ruined that rigid but outwardly perfect life. Experience has also taught Stuart that keeping his love of lacy things under wraps is safer than telling the truth.

After Malcom’s boss, Carter, hires Stuart’s restaurant to cater a gala fundraising event, the strait-laced Malcolm is thrown together with badass biker Stuart. Despite their differences and a couple of false starts, the men discover they work well together and a friendship quickly forms.

As Malcolm’s feelings for Stuart deepen, his sexuality awakens, but he remains tight-lipped about his problems. And though Stuart grows more and more attached to Malcolm, he remains fearful of confessing his kink.

When both of their secrets are finally exposed, they find themselves at a crossroads in which they must choose between playing it safe or finally coming clean to the person they love.

From Straight Up, The Speakeasy #4

“Crap, crap crap.” Malcolm took the subway stairs two at a time, muttering under his breath.

He’d arranged the Thursday meeting with Chef Morgan at Lock & Key, expecting forty-five minutes would be plenty of time to commute up from Midtown. However, a mechanical problem had plagued his train and he’d spent the crawling ride exchanging messages with his mom, trying to get her to apply for job openings he’d found in the neighborhoods around Staten Island. Now Malcolm was nearly fifteen minutes late and almost sprinting along Broadway in his loafers and business casual duds, messenger bag bumping his hip.

Malcolm hated being late, particularly when it came to his job. He’d texted the chef with a heads-up he was running behind, but still felt wretched and unprofessional. He also knew this would make a poor impression on a man who had high expectations of the people around him. Stuart had been friendly—even charming—when he’d introduced himself to Malcolm, tattoos peeking out from beneath the chef’s white jacket. His demeanor had changed the moment the talk had turned to food, however, shifting into a thorough confidence that was reflected in the quality and plating of the food he’d put in front of Malcolm. Everything had been luscious—both esthetically and in taste—and Malcolm had known from the first bite that the chef and his staff at King’s would do impeccable work for the CEC fundraiser.

The steel in Stuart’s expression as he’d spoken about food and his work had reassured Malcolm. He understood how to interact with a man who was all business. He’d been less sure of how to handle the moments when Stuart had smiled at him, however, and the way that warmth had made his brown eyes dance. The chef’s touch had tingled against Malcolm’s skin when they’d bid each other goodbye, too and…well. Malcolm really didn’t know what to make of that.

He caught sight of a huge motorcycle parked by the curb as he neared Lock & Key and slowed to a walk. It was a beautiful machine, gleaming black and chrome in the late afternoon light, and Malcolm could imagine the kind of man who rode it, clad in a leather jacket with tattoos on full display.

Malcolm nearly tripped into Lock & Key’s door. Where the hell had that come from?

Seconds later his errant thought literally came to life and Malcolm blinked at the sight of the chef seated at Lock & Key’s bar, a tall glass of water in hand and motorcycle helmet by his elbow. Stuart wore a black leather jacket, just as Malcolm had imagined, and a scowl so mighty he looked almost like a stranger. Malcolm’s stomach flipped.

“I’m sorry I’m late,” he said in a rush. Moving quickly, Malcolm waved hello to the bartender, then pulled the strap of his bag over his head and stepped up beside Stuart. “I meant to be here to meet you, Chef, but the train—”

Stuart cut in, his voice gruff and grumpy as Malcolm had expected. “I get it. Public transportation sucks.”

“Downstairs?” Stuart waved at the room around them with one hand. “Downstairs from here?”

“Um, yeah. This is Lock & Key. Under’s located in the basement.”

“I thought you said the event would be happening on the roof?”

“It will be. Under and Lock & Key will be part of it, too though. Sort of.” Heat flashed over Malcolm’s cheeks when Stuart rolled his eyes. “Sorry, let’s …” He blew out a breath and squared his shoulders. “Let’s start again.”

K. Evan Coles is a mother and tech pirate by day and a writer by night. She is a dreamer who, with a little hard work and a lot of good coffee, coaxes words out of her head and onto paper. K. lives in the northeast United States, where she complains bitterly about the winters, but truly loves the region and its diverse, tenacious and deceptively compassionate people. You’ll usually find K. nerding out over books, movies and television with friends and family. She’s especially proud to be raising her son as part of a new generation of unabashed geeks.

Brigham Vaughn is on the adventure of a lifetime as a full-time writer. She devours books at an alarming rate and hasn’t let her short arms and long torso stop her from doing yoga. She makes a killer key lime pie, hates green peppers, and loves wine tasting tours. A collector of vintage Nancy Drew books and green glassware, she enjoys poking around in antique shops and refinishing thrift store furniture. An avid photographer, she dreams of traveling the world and she can’t wait to discover everything else life has to offer her.

Her books range from short stories to novellas. They explore gay, bisexual, lesbian, and polyamorous romance in contemporary settings.