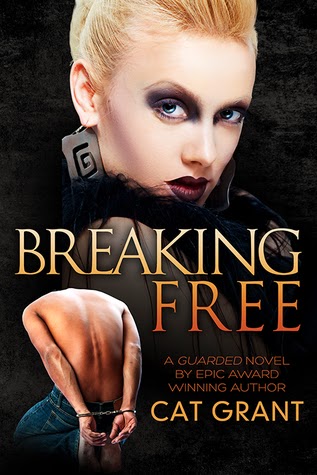 This review originally posted on The Novel Approach ~ http://thenovelapproachreviews.com/2014/08/18/a-transwoman-finds-the-courage-to-become-her-true-self-in-cat-grants-breaking-free/

Richard Carr has the kind of life most people would envy. Partner in a major Los Angeles law firm, married to the man of his dreams, Richard seems to have it made – except for the lie he’s been living for the past forty-odd years.

But starting his – her – transition doesn’t provide the relief Renee had hoped for. Her business partners demand that she go back to dressing as a man at the office, while Robert, her husband and fellow Dominant, can’t conceal his shock as the man he married disappears a little bit more every day.

Their one true point of connection remains in the dungeon – in the person of Jase Hewitt, the submissive they both share. But when a devastating tragedy shatters Jase and sends him running to his Masters for comfort, it quickly becomes apparent that Robert’s love for Jase extends far beyond their Dom/sub roles…

And Renee faces a choice – abandon her journey toward becoming the person she truly is inside, or risk losing the man she loves.

Normally I’d start off my review with a quick summary of the story, but this book kind of blew me away. In a good way, that is, and I just had to share that first because this is definitely a book you should be reading. Okay, so that’s totally my opinion, but I bet if you read Breaking Free, you’ll agree with me.

Richard is not happy with who he is in his day to day life; he knows he doesn’t fit the body he’s in and that something has to change before he loses his sense of self. The only time he feels good about himself are the nights he lets Renee out to play, when he and his partner Robert host their BDSM parties. Until one night he decides to debut Renee out in public while out to dinner with their friends. Dropping his voice to a husky murmur while donning a long blonde wig, a beautiful dress, killer shoes and the perfect shade of lipstick, Richard becomes the very beautiful Renee. This isn’t enough, though; Richard still feels uncomfortable in his own skin, and this leaves him unsettled and battling depression.

Robert loves Richard with a fierce love, but he’s unsure of Richard as Renee. They’ve discussed how Richard feels but while you might agree when talking about something, seeing it can change how you feel. Robert wants Richard to be happy but once confronted with Renee, he’s not sure he feels the same thing for Renee as he does for Richard. As hard as it is for Renee to be Richard, it’s hard for Robert to immediately feel the same for Renee as he did Richard. This is as much a change for him as it is for Renee, and it’s hard for both to deal with Renee’s transition. This change is life altering, and their reactions to each other during Renee’s transition could damage their long-term relationship, permanently.

This book is actually the prequel to Guarded. In this story you get not just Robert and Renee’s complete story, but see Jase and Eric’s story and how Jase became a Dom. The focus, though, is on Richard’s transition to Renee, how those choices affect both Robert and Renee, and ultimately, are they able to work through their issues. Cat Grant handled what is a very hard decision in any person’s life with a great amount of care and a healthy dose of reality.

Instead of just showing that making the decision to transition from one sex to another was all lightness and roses, she showed that it’s not and that it affects not just the person transitioning but everyone around them. Jase didn’t see anyone other than Renee when Richard started transitioning in just the clothing aspect. Robert, on the other hand, took it very badly. He could only focus on the gender aspect at first. Being a gay male, now in a relationship with a woman, well, that wasn’t who he’d intended to be with the rest of his life. In his mind he entered into a long term relationship with Richard, and he loved Richard with his whole heart and soul. Renee wasn’t Richard, even though she’s actually the most important part of Richard.

I went into Breaking Free not knowing what to expect, other than I had absolutely adored Renee in Guarded. I’d never read another book with a character transitioning from one sex to another. I really felt that the balance in this story of how Renee felt as both sexes, going through the transition, and also the choices she makes as she goes through the transition were very well written and again, handled very well. Robert’s reactions, his feelings for Jase, and how he deals with Renee’s transition, or rather, how he didn’t deal with it. Reading that moment when Jase actually gets Robert to see that Renee is no different than she was when she showed the outer image of Richard, that moment and Robert and Renee reconnecting were perfect moments, the kind of moments you live to read for in any story. Those moments are what I love to share with other readers, so don’t pass this story up.
Posted by Wicked Faerie's Tales and Reviews at 1/17/2015 10:12:00 PM