The Way Things Are by A.J. Thomas - Book Blast with Giveaway 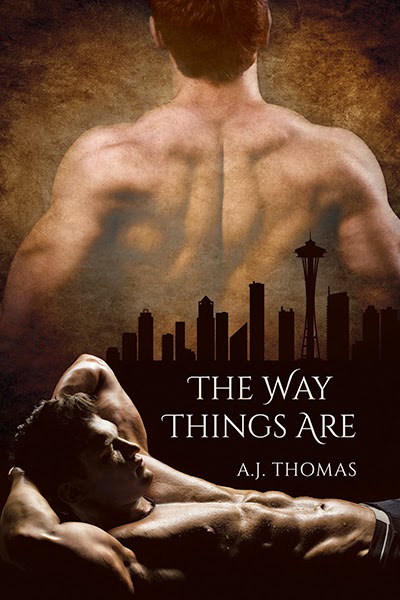 A night of drunken confusion at nineteen resulted in Patrick Connelly fathering a child. Determined to be there for his son, Patrick walked away from a sport he loved and forever hid his sexuality. After Patrick's brutal divorce and a vicious hate crime, his son, Jay, has become obsessed with graffiti. Hoping for a fresh start, Patrick moves Jay to his childhood home in Seattle. Within two weeks, Jay is arrested again. On his way to pick Jay up, Patrick stops an assault, then finds himself in handcuffs too. Thinking things canʼt get any worse, heʼs confronted by the sexiest man heʼs ever seen—his sonʼs new probation officer, Ken Atkins.

The hardest part of Kenʼs job is working with difficult parents, and the undeniably handsome Patrick Connelly is going to be a difficult parent. A chance encounter and steamy hookup with Patrick leave Ken blindsided. As they work together to try to keep Jay on the right path, the passion between them proves impossible to resist. When the assault Patrick prevented comes back to haunt them and Jay gets into trouble again, Ken must convince Patrick that ensuring his sonʼs happiness doesnʼt have to mean sacrificing his own.

Ken shook his head, the motion making his entire body sway again. “I can’t believe you,” he said in disgust. “You have a child home alone right now, who needs an actual fucking role model in his life and actual supervision, and you’re here.” He gestured around at the dusty office. “I would have figured you’d be a bit old and butch for most of the clientele at this place.”

Patrick opened his mouth to deny that he was there selling himself, then stopped. “I’m not that old. And I am an employee of Corbin’s Attic.”

Ken chuckled. “You work for the club?”

“Yes. I had a shirt, but some vicious little drama queen insisted I dance with him, and he wouldn’t take no for answer.”

“You should have called one of the bouncers. They’re serious guys.”

“Uh….” Patrick scratched the back of his head. “I am pretty sure none of the other bouncers here would have come to my rescue.”

“Yeah. Which reminds me, I need to steal another shirt.” The security T-shirts were in a small, tumbling stack on top of boxes in the corner, next to five bigger stacks of black aprons and towels. He sorted through the T-shirts to find his size, then held it up so Ken could see the stenciled yellow “SECURITY” on the back.

“Just until I get my first check from the Port. And until Jay gets in trouble again and has to pay another fine. And maybe until the owner finds someone else to use as eye candy when he wants to make the guy who refuses to go out with him jealous.”

Ken choked. “That was the owner? The blonde guy you were wrapped around out there?”

“That was Corbin Hollis, yes. Which is why none of the other guys would dare help me. He’s my best friend. He’s letting me pick up some hours here because I’m broke.”

Ken looked at him again, just for a moment, before he dropped his gaze to the floor. “I should let you get back to work, then.”

Patrick caught Ken as he stumbled toward the door. “Hang on, now. I told you why I was here. Shouldn’t you be fair?”

“No,” Ken said. “I shouldn’t be here at all. Not if one of my parents works here, that’s for damn sure.” Patrick wrapped his arms around Ken’s waist and tried to hold him steady while Ken squirmed. When he slumped back against Patrick’s chest, the hard cock straining against the denim of Ken’s jeans made Patrick freeze and nearly drop him.

A.J. Thomas writes romantic suspense. She’s earned a Bachelor’s degree in Literature from the University of Montana and worked in a half-dozen different jobs, from law enforcement officer to librarian, before settling down. Life as a military spouse has tossed her around the country so many times she doesn’t know how to answer when people ask her where she’s from, but she delights in living as a perpetual tourist, visiting new places and discovering amazing things.

Her time is divided between taking care of her three young children, experimenting with cooking and baking projects that rarely explode these days, and embarrassing her husband with dirty jokes. When she’s not writing, she hikes, gardens, researches every random idea that comes into her head, and develops complicated philosophical arguments about why a clean house is highly overrated. Her work has won multiple awards, including the 2013 AMB Ovation Award for Best LGBT Inter-racial Romance, and the 2014 Rainbow Award for Best Gay Contemporary Fiction. 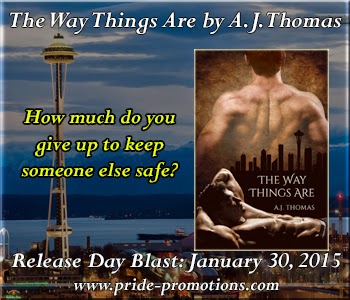