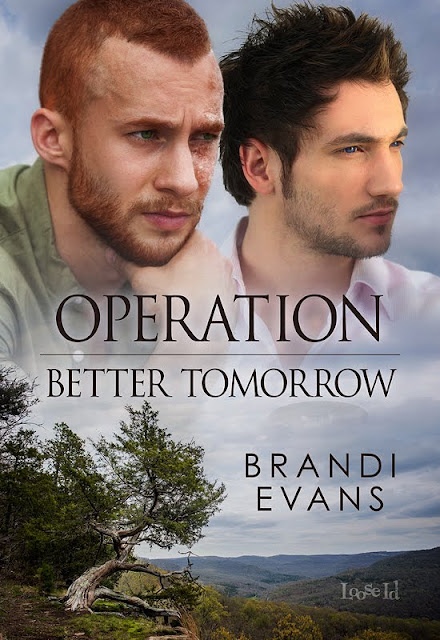 The interview of a lifetime.

When Aaron Strickland’s assigned to write a feature article on Caleb Douglas, the first openly gay soldier to receive the Medal of Honor, he’s over-the-moon. Meet a sexy, real-life hero? Yes, please. And in the weeks leading up to their interview, the former soldier becomes a recurring player in Aaron’s fantasies.

Years earlier, lost in the throes of depression and PTSD after an ambush left his body and soul scarred, Caleb was on the brink of giving up when a magazine article changed his life forever—an article written by Aaron. Emerging from the depths of his pain, Operation Better Tomorrow—part homestead, part halfway house for those down on their luck—was born.

Tragedy lurking on the horizon.

As the days pass, Caleb and Aaron’s tragic pasts bind them in ways they aren’t prepared for, but it also leaves them vulnerable. Pushing forward means breaking down walls they’ve built to protect themselves, and just as they’re poised on the precipice of happiness, a darkness descends on the homestead, a hatred that will leave one man clinging to life and the other willing to risk everything to save him.


Resisting the urge to follow Aaron, Caleb unlatched the wicker picnic basket from the left saddlebag, grabbed the thick blanket from the right, and traipsed deep into the waist-high colors. Blues, purples, and yellows dotted the greenery and swayed in the late-summer breeze. The meadow smelled sweet and made him think of peace and tranquility. The area, along with Aaron’s article and daily meditation, were the best anti-depressants Caleb had ever had.
He set the basket and Aaron’s bag down and unfolded the blanket. Considering the height and density of the flowers, laying out the cloth was an exercise in frustration management. A step-and-tug here, an expletive or twelve there, he inched the material down until he created a makeshift hideaway.
Before taking his seat and disappearing into the overgrowth, he glanced around until he found Aaron. The other man was zoomed in on a yellow bud, and Caleb smiled. He liked the idea of sharing this place with Aaron. It was the perfect backdrop to delve into his pain.
He unclipped his walkie and set it on the corner of the blanket before dishing food onto the thin, floral plates that had come with the basket. Thick turkey sandwiches with blue cheese and fresh tomatoes, fruit salad, and oven-baked green bean crisps—green beans drizzled with olive oil, salted, peppered, and then baked until they were crispy. To complement the meal, he’d chosen a Château Timberlay Bordeaux. It wasn’t a full-on red, but it had a deep, lush flavor he really liked.
He uncorked the bottle, removed one of the wineglasses fastened to the inside of the—
“Oh, God, Caleb. Don’t move.”
Caleb froze, Aaron’s soft command triggering an ingrained response from his Army days. When a commander told you to freeze while on patrol, you fucking froze. Period.
No debate. You obeyed or you could die. But what danger was there out here? Had the other man seen a snake or something?
“Don’t move a muscle.” Click. Click, click. “It’s breathtaking.”
Caleb breathed a sigh of relief. Aaron was just taking pictures. “Aaron—”
“Shh.” Click, click. “Not even a muscle. This shot’s gorgeous. You’re fucking gorgeous. I can’t… Your profile’s…” Click, click. Click. Click. “Oh my God, look at yourself.”
Caleb turned toward Aaron’s voice as the other man emerged from the flowers and crawled onto the blanket in an awkward “three-legged” motion, holding out his camera. Blades of grass and broken flower petals stuck in his perfectly messy hair, and his smile was eight times more breathtaking than any Caleb had ever seen. The intensity, the passion on Aaron’s face, matched what was stirring inside him.
Aaron settled beside Caleb and held the camera so they could both see the screen on the back, but Caleb couldn’t take his eyes off the man beside him, watching Aaron as he looked at Caleb’s image on the screen. The pleasure on Aaron’s face, as cliché as it was, stole Caleb’s breath, and when Aaron turned his head, Caleb captured that incredible mouth in a quick, hard kiss.
Caleb pulled back and drew his thumb over the bottom lip he’d just claimed. “Thank you.”
Aaron’s eyebrows drew together. “For what?”


“Just…thank you.” Caleb tapped his lips to Aaron’s again and then forced himself to pull back before the moment spun out of control. He wanted Aaron, but doubt was malevolent, constant. The idea of exposing himself at all was terrifying, but here, in the open, in the light of day, it positively petrified him. Not out here. Not like this. But if ever there was someone to take a chance on…

EXCLUSIVE EXCERPT
The awe weaving itself into every aspect of Aaron’s expression reached inside Caleb’s chest and cranked up his heart rate. He wanted to trace the other man’s trembling bottom lip with the pad of his thumb, wanted to soothe the quiver his revelation had caused. Or better yet, use his tongue to do the soothing.
When he found the ability to speak, his voice was softer than he’d intended. “I still have that article at my cabin. The one you did on Janet McKnight.”
Aaron nodded but said nothing.
Janet was the lone survivor of a car crash that had killed her husband and their two young children and left her in a wheelchair, paralyzed from the waist down. She’d attempted suicide several times and, like Caleb, had battled with depression and PTSD for years before having her own life-changing moment. And now, she ran a charity whose sole purpose was to raise money for people with spinal injuries.
Caleb moved a step closer to Aaron. “I’m probably one of your biggest fans. I pull out that magazine at least twice a year and reread your article to remind myself of how far I’ve come since those dark days.”
The trembling of Aaron’s lower lip grew in intensity. He removed his camera, hit a button that made the lens retract, and then set it on the shelf beside him. He still didn’t speak.
Caleb took another step closer, drawn to Aaron like vegetation to the morning light. “Which was why I was so excited when I received your interview request. I was going to get to meet you.”
“So that’s why you said yes to my interview request when you’d turned down so many others.”
“I knew it was time to break my silence, but yeah, part of my saying yes was because I wanted to meet you.”
“Caleb…”
Caleb read his name on Aaron’s lips more than he heard it, and he flexed his fingers, the compulsion to bury his fingers in Aaron’s hair more overwhelming than the need for his next breath.

Brandi Evans was raised by a caravan of traveling Gypsies. She spent her days learning the ways of her people and her nights lost in legends as old as time. Okay, not really, but that's way more interesting than the truth! In reality, Brandi grew up the oldest child of an ordinary family. Grade school, middle school, high school. Nothing extraordinary happened until she left the nest. She joined the military, went to college, got married, and became a mom. And somewhere along the way, she discovered she liked to read—and write!—stories hot enough to melt eReaders. These days, she calls The Natural State home where she lives with her hubby, two beautiful daughters, two dogs and a cat who has yet to realize she doesn’t own the place. Soldier. Wife. Mom. Multi-published smut writer. Brandi's life might not be "traveling Gypsy" interesting, but she's had fun. And in the end, isn't that all that really matters?