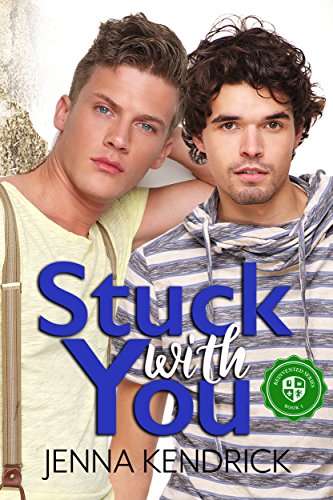 The Assignment: Discover if forced proximity leads to increased intimacy by being handcuffed to a partner for five days.

Jamie O'Connor's closet is tightly closed and full of secrets. Attending college on a baseball scholarship, he's hiding an injury along with his sexuality. A college degree is the key to escaping his family's oppressive expectations. Until he graduates, he needs to play ball, both on the field and off. Being partnered with an openly gay classmate for a sociology project threatens to put more than just his free college ride at risk.

Seth Lerner's closet is empty, but that's because his baggage is always right by his side. Managing his severe ADHD while trying to overcome an earlier setback leaves him little time for any kind of social life, much less a relationship. He certainly can't afford the distraction of falling for his closeted project partner.

Neither Jamie nor Seth plan on letting this assignment get in the way of their objectives. But secrets come out and goals change when you're stuck together.

Excerpt #1
The finest denim-clad ass Jamie had ever seen brushed past him, and Jamie almost dropped his textbook. He should be used to this reaction by now, but every glance at Seth Lerner caused him to lose all sense.
Seth went to his usual seat, one row ahead and three chairs over. Jamie was fascinated by the precise way Seth always lined up his blue pen and two highlighters, one yellow and one green, to the left of his composition-style notebook. While almost everyone else in the class typed their notes directly into a computer, Seth wrote his by hand. Once everything was aligned to his satisfaction, he pulled the earbuds out of his ears and bent over to shove his phone into the front of his backpack and zip it resolutely away. This was Jamie’s favorite part of Seth’s pre-class ritual, as Seth’s shirt rode up enough to give Jamie a glimpse of dimples and the faintest smattering of light brown hair at the top of his ass.
Jamie adjusted himself under the guise of settling into his seat. The stadium seating of the Kellogg 2A lecture hall sucked for a discussion-based class of only 30 students, but he was grateful for the long tables that ran the length of each row, hiding both illicit cell phone use and erections. He’d spend the majority of class half-hard, attuned to Seth’s every movement. The precision of Seth’s placement of his textbook to the right of his notebook belied his almost incessant leg-bouncing and finger tapping. More than once, Jamie had needed to borrow Christian’s class notes because he’d gotten too caught up in the rhythm of the song that obviously flowed through Seth’s body. Not that he ever admitted to Christian why he’d been unable to keep up with the professor’s lecture. After all, Jamie was straight.
Seth, of course, was oblivious to Jamie’s attention. Jamie had chosen his self-assigned seat with care, able to view the object of his attention throughout class without being obvious about it. If Seth ever felt as if he were being watched, he certainly never turned around or gave any other indication of paranoia. Good thing, too, because awareness would ruin the fantasy forever. Jamie could barely admit his interest to himself; he’d never be able to work up the courage to confess to anyone else. Especially not Seth himself. And he’d be more apt to walk across the quad naked than to act on his desire.
As the room filled with students, Jamie pulled his attention away from the way Seth’s wide shoulders narrowed to his lean torso and forced himself to focus on the front of the lecture hall. Dr. Pulaski was running late, as usual. She often left a discussion question on the board to get the class thinking and talking. But what did she mean by the single word she’d written today?
“Tethered? I didn’t see anything about bondage in the syllabus,” someone behind him said, accompanied by loud laughs from his friends. Donny Stewart had a joke for everything. If it could be at someone else’s expense, even better.
“It could mean the baggage we all carry with us,” a girl in the front row offered timidly. Mary, Marjorie—her name was something like that. Jamie had seen her waiting up for Seth outside the lecture hall and walking around campus with him, but for some reason they never sat together in class.
“You mean the baggage you’re carrying around your hips?” Donny’s sycophants laughed long and loud at his quick comeback. Hadn’t these idiots dished out enough of this shit in high school?
“More like the helium balloon that is your brain, Stew.” Jamie fired back. Few people stood up to Donny because they feared being the next victim in his crosshairs.
Seth turned in his seat to see who’d spoken. Jamie was startled as they made direct eye contact for the first time. The depth of Seth’s chocolate brown eyes captured him to the point that he almost missed Donny’s retort. Shit, if that asshole caught him making goo-goo eyes at a guy, not even Jamie’s status as pitcher and captain of the baseball team would save him from becoming a target of his bullying.
“Are lame comebacks what you’re pitching instead of baseballs these days, Windup? That’d explain why you’re not making it into the strike zone.” And sometimes even being a jock wasn’t a safety net. Especially a jock having a crap season and trouble performing up to expectations.
Jamie forced himself to look away from Seth and lean back casually in his seat, hoping the rest of the class thought he was just too cool to continue engaging with Donny. He was spared any further embarrassment—of the inappropriate attraction or sports performance varieties—by the belated entrance of Dr. Pulaski.
“Sorry I’m late, gang.” Dr. P greeted the class with the same refrain every Monday, Wednesday, and Friday. Jamie wondered how she’d react if they all recited it to her en masse one day. “The daycare center was a madhouse, and Lily was clingy.” She talked about her daughter at every opportunity and often raced across campus to the nearby daycare center between classes and office hours.
She dropped an oversized tote on the floor next to the podium with a heavy thud and removed her silly hat with the strings and pompoms. “So let’s get started. I didn’t leave you much to go on today, so I’m figuring either you all spent the last ten minutes on Snapchat—“ She looked up from where she’d been setting out her lecture notes and glared in Donny’s direction. “—Or making inappropriate comments.”
Everyone laughed, including Jamie. Although not part of his major, Sociology of Emotions was his favorite class this semester. He rolled his shoulders, ignoring the dull ache that was a constant companion, and settled in to enjoy the hour. 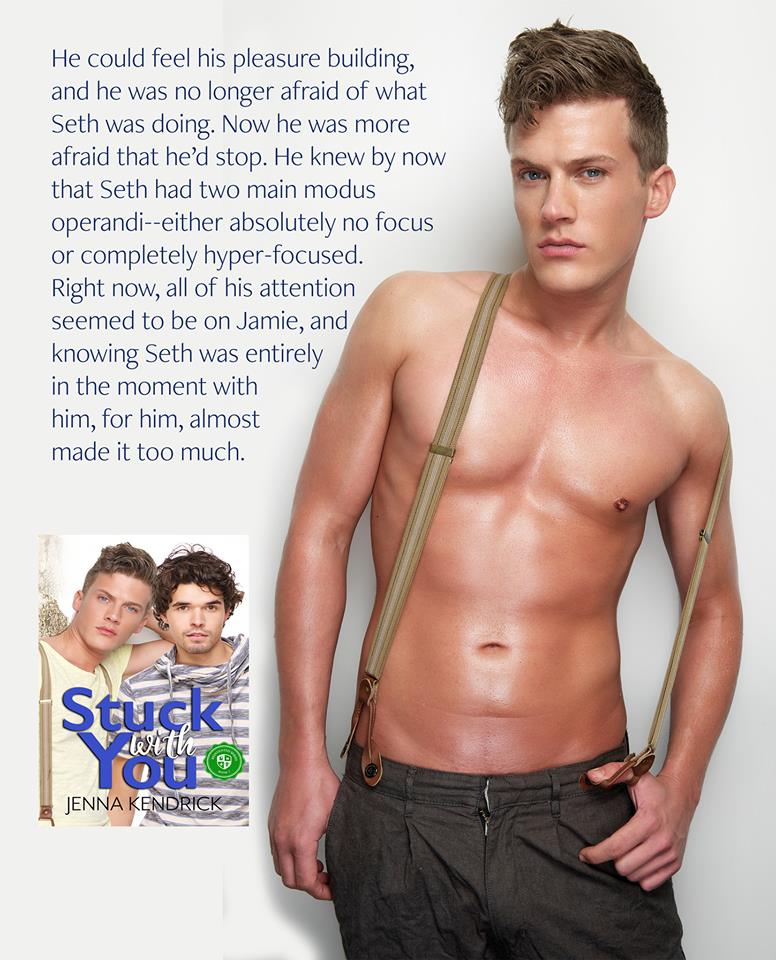 Seth looked over at Jamie as they crossed the once-again hushed campus, students breaking off from the pack as they approached their own dorms. After taking off in his usual rush, Jamie had shortened his strides to match Seth’s, but his long fingers repeatedly squeezed around the hat he continued to hold as if barely containing his temper.
“Mari was only taking a wild-assed guess.” Seth attempted to break the silence. Jamie glared at him and picked up the pace.
The short walk felt like a death march. Seth’s thoughts kept cadence. Left foot, Jamie’s voice in his head whispering “I’m gay.” Right foot, a reminder of how conflicted he’d felt all day, wagging his tail like a puppy at Jamie’s praise and then feeling like he’d soiled the carpet when that affection had been withdrawn. This was why he didn’t do people. Except Mari. And she’d turned on him, too, and gone out of her way to turn Jamie against him just when Seth’s tail started twitching again.
I’ve spent too much time with Grand’s dogs.
They climbed the three flights of stairs to his room, and Jamie shifted his feet impatiently while Seth shoved numb fingers into his jeans pocket. Nerves and cold made him drop the key. With a grunt, Jamie bent to retrieve it, then hip-checked Seth aside to insert it into the lock. He pushed the door open so hard, it bounced off the wall, and he raised his arm in time to prevent it from hitting his face on the rebound. Seth was leery of entering the room with the clearly angry guy, but Jamie didn’t give him any choice, tugging him inside before slamming the door shut.
“Jamie, I’m sor—“
Jamie pushed him roughly against the back of the door. Seth’s head hit with a crack. Oh, shit! As he raised his arms to defend himself, Jamie’s lips crashed against his own. Seth’s breath left him in a whoosh, sudden fear replaced just as quickly with excitement. Jamie’s tongue dove into Seth’s mouth, its hot sweetness bringing his entire body to attention. When Seth tilted his head to a better angle, Jamie slid his hands up Seth’s arms and drove his long fingers into his hair, forcing him to stay still as Jamie tasted and explored, nipping Seth’s lips with his teeth, stroking Seth’s tongue with his own. If their first kiss had been a shy hello, this was an entire conversation. Jamie’s hands enveloped his head like a helmet, palms cupping his jaw on both sides and thumbs stroking over his cheekbones while his fingers rubbed gently at the spot where Seth’s skull met the door, soothing the hurt. His hands were icy from the snowball fight, and Seth shivered.
The goosebumps on his skin increased the sensation as Jamie’s body pressed against him. Even wet and chilled through, feeling the hardness of Jamie’s jeans-covered cock acted as a match to kindling, instantly heating him up. He wanted to move, to get more of that delicious friction, but squeezed between Jamie and the door, all he could do was feel whatever Jamie chose to allow him. With Jamie’s hands holding his head still, the only place Seth could rest his own within the confines of the tether were around Jamie’s neck. 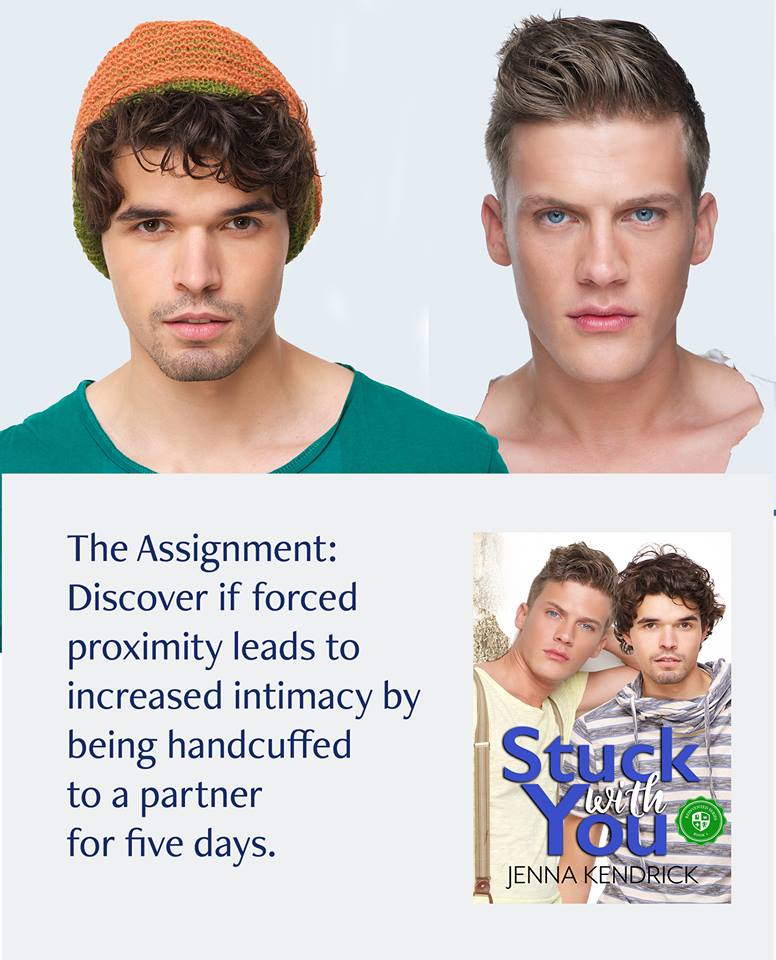 Jenna Kendrick writes contemporary, new adult, and paranormal romance about smart guys with a propensity for snark. Jenna went to a small college in the woods of Western Massachusetts, where she alternated between bare feet and hiking boots and used dining hall trays as a mode of transportation in the winter. She fell in love with creative writing after writing a satirical essay to get out of yet another literary analysis assignment. Unable to choose a coast or climate zone, she bounced around the country before settling in Upstate New York. She lives with her husband and several furry creatives, some of whom think of her desk as their own. This may be why Jenna's developed a sudden urge to write about shifters.