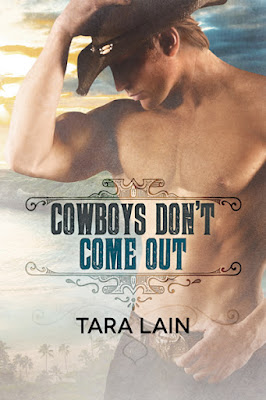 Blurb:
Rand McIntyre settles for good enough. He loves his small California ranch, raising horses, and teaching riding to the kids he adores—but having kids of his own and someone to love means coming out, and that would jeopardize everything he’s built. Then, despite his terror of flying, he goes on a holiday to Hana, Hawaii with his parents and meets the dark and mysterious Kai Kealoha, a genuine Hawaiian cowboy. Rand takes to Kai’s kid brother and sister as much as he drools over Kai, but the guy sports more prickles than a horned toad, and more secrets than the exotic land he comes from.

Kai’s earned his privacy and lives to protect his “kids.” He ought to stay away from the big, handsome cowboy for everyone’s sake—but since the guy’s just a haole on a short vacation, how much damage can he do? When all of Kai’s worst fears and Rand’s darkest nightmares come true at once, there’s not much chance for two cowboys who can’t—or won’t—come out.

Inside, twilight dim. The room smelled warm and spicy. Funny, he hadn’t put that scent together with Rand—but it was his, through and through. Nobody here. “Hello?”
“Looking for me?” Rand walked out of the bathroom wearing a heart-stopping, breath-robbing towel around his hips—uh, except for the slice of bare groin revealed because the towel stood out in front like a banyan tree canopy. That cotton tent had to be a lot more comfortable than the tight denim smothering Kai’s rising cock.
Too much air flowed out with Kai’s words and made him sound like he’d just run a half-marathon. “I was hoping that message about your nap might be intended for me.”
“Yep.”
“So what did you have in mind, cowboy?” Man, his heart throbbed in his dick. It ought to be dancing the salsa.
“Some riding lessons.”
“You’re the teacher.”
“Nah, I’m the quarter horse.”
Heart—stopped. “You want to bottom?”
“Yep.”
“Holy hell.”
Rand stared at Kai’s jeans and grinned. “You like that idea?”
“Oh yeah.”
“Good. Condoms and lube are on the bed. My ass, I mean stallion, is at your service.”
Kai staggered to the footstool in front of the corner chair, collapsed into it, and started yanking at his boots. Rand walked over slow and easy-like. “Take your hat, cowboy, or you want to fuck with it on?”
Fuck? Oh shit, how long since he’d been with a man? A person? His cock steamed and bobbed.


Rand grabbed Kai’s Stetson and tossed it onto the coffee table, then took hold of Kai’s other boot. The combination of two boots half-off flipped Kai onto his back on the chair like a giant turtle. Rand hauled off the one boot, then grabbed the other and pulled it too, sent both flying, then yanked on Kai’s jeans. “So much trouble getting riders properly dressed.”

Name -- Kai Kealoha
Age – Claims to be 22 (but isn’t)
Hair – Black and longish
Eyes – Deep brown, almost black
Height – Just under 6’ and slender but strong
Profession – paniolo, Hawaiian cowboy, who works as a ranch hand and guides trail rides
Family – a younger half-brother and half-sister whom he adores and protects
Fears – Of anyone hurting “his kids”, of revealing his secrets and of coming out of the closet


Loves – His brother and sister and eventually, Rand McIntyre.