Afraid To Fly by L.A. Witt - Blog Tour with Giveaway 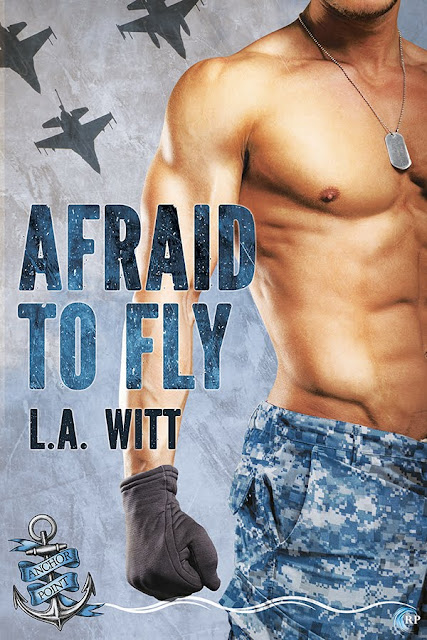 About Afraid to Fly

Once a fearless fighter pilot, Commander Travis Wilson is now confined to a desk. It’s been eight years since the near-fatal crash that grounded him, and it still rules his life thanks to relentless back pain.

Lieutenant Commander Clint Fraser almost drowned in a bottle after a highly classified catastrophe while piloting a drone. His downward spiral cost him his marriage and kids, but he’s sober now and getting his life back on track. He’s traded drones for a desk, and he’s determined to reconcile with his kids and navigate the choppy waters of PTSD.

Clint has been on Travis’s radar ever since he transferred to Anchor Point. When Clint comes out to his colleagues, it’s a disaster, but there’s a silver lining: now that Travis knows Clint is into men, the chemistry between them explodes.

It’s all fun and games until emotions get involved. Clint’s never been in love with a man before. Travis has, and a decade later, that tragic ending still haunts him. Clint needs to coax him past his fear of crashing and burning again, or their love will be grounded before takeoff.

Afraid to Fly is available January 16th from Riptide Publishing.

To celebrate the release of Afraid to Fly, one lucky winner will receive $10 in Riptide Publishing credit and two books of choice from L.A. Witt’s backlist! Leave a comment with your contact info to enter the contest. Entries close at midnight, Eastern time, on January 21, 2017. Contest is NOT restricted to U.S. entries. Thanks for following the tour, and don’t forget to leave your contact info!