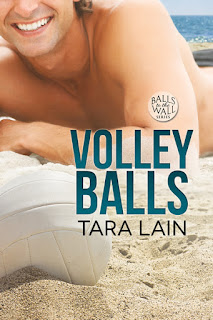 Blurb:
A double dose of alpha male might be better than one. Tara Lain’s popular novella, Volley Balls, is now expanded and revised.

Despite just getting out of an abusive relationship with an asshole alpha, David Underwood’s wandering glance lands on two hot members of the Australian volleyball team on Laguna Beach and gets him harassed again. Still, when the delicious Gareth Marshall proves his interest by coming out to his team, David succumbs to his attraction. But Gareth’s volleyball partner, Edge, who’s equally hot, makes the lovers’ lives miserable.

For Gareth, a lifetime of hiding his orientation—and his attraction—from his best friend, Edge, as well as everyone else around him, adds up to hurt and frustration. David’s the first man to ever compete with Edge for Gareth’s passion. But Edge has secrets of his own, and David’s ex-lover will never be happy without David under his fist. With everything stacked against him, can a gay Laguna man find happiness with an alpha male–or two? 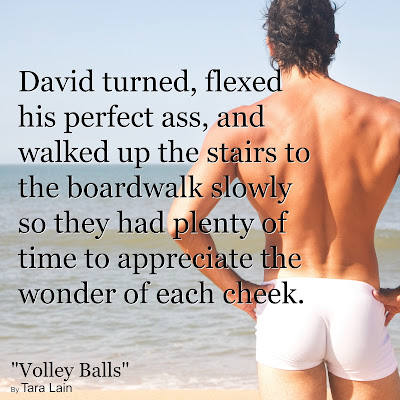 Leaning against the wall by the door, blocking his exit, was “the friend.” The delicious, terrifying, dark-haired beach guy, sporting an inscrutable expression—part grin and part grimace.
Holy shit. This could not be another accidental meeting.
Scared and pissed—an adrenaline-intensive combo. His heart beat like a bass drum and goose bumps covered his arms—and his dick. “What the fuck are you doing here?” he shouted. Best defense and all that.
The dark-haired guy shrugged and kind of ducked. “I hate to admit it, but I followed you.”
“You’re kidding.”
“No. I went to your store to see you and saw you walking over here, so—” He shrugged again. “—I followed you.”
David’s stomach turned. “Shit! Jesus, get away from me.” But he couldn’t force his leaden legs to pass the man. In fact, he fell back a couple of feet.
The guy pushed off from the wall and stepped toward him. “Is that guy your boyfriend?”
“None of your business.” David put up his hands. “You can’t get away with beating up gay men in Laguna. This isn’t some Neanderthal country. You’ll get arrested,”
The guy paused and frowned. “Who said anything about beating you up?”
“How about your fucking friend?”
The guy took another step toward David. “He’s not me. Understand?” It sounded like understend. “I mean you no harm, mate. Honest.”
David pressed back against the wall. Trapped. Maybe he could slip to the side. “Then what do you want? Why are you following me?”
The guy stopped. “I don’t usually act this way. All stalkery.”
“Thanks a fuck for reserving it for me.”
“It’s just I saw you three times and—I guess three’s a charm like they say. I want to take you out—like to dinner.”
David gasped. “What?” He turned only his eyes toward the Aussie. The guy was gazing at David’s face like some painting in his gallery.
“I saw you last night. At that art thingy. I thought you were perfect. Those cheekbones, that ass. Sorry. I’d like to take you out.”
“Out? As in on a date out?”
“Yeh, that’s the idea.”
Of all the fucking nerve…. David shoved off the wall, hands firmly planted on his hips. “Are you trying to tell me that you’re gay? Running around harassing innocent people with that band of delinquents, and you’re a closet case? Give me a break! Haven’t you heard? It’s chic to be gay. We can get married and everything. Get into this decade.”
“Sorry. It’s just I’m a volleyballer. And Australian, at least currently. We don’t come out. But I’d really like to take you out.”
“As your pal? Right.” David flipped his hair. “No, asshole. Get away from me. I do not do this. I don’t go with men who aren’t proud of who and what they are. Not anymore. Never again. Go back to your closet and play with your volleyballs.” 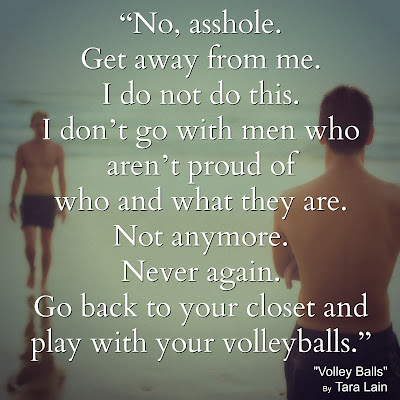 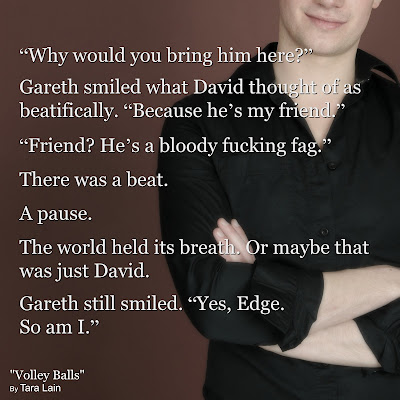 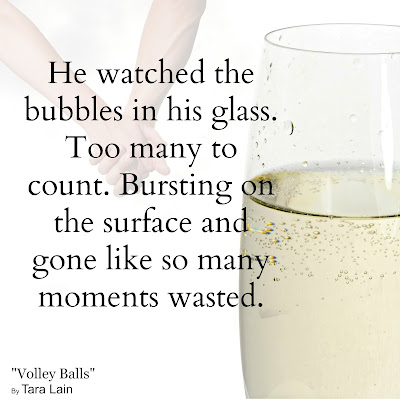