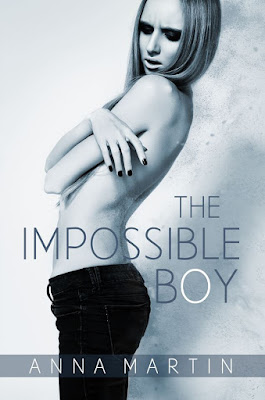 This is not your average love story.

Ben Easton is not your average romantic hero. He’s a tattooed, badass, wannabe rock star, working in a perfectly horrible dive bar in Camden Town. His life is good, and he’s totally unprepared for how one man will turn it upside down.

Stan isn’t your average heroine. As a gender-fluid man, he proudly wears his blond hair long, his heels sky-high, and his make-up perfectly executed. A fashion industry prodigy, Stan is in London after stints working in Italy and New York City, and he quickly falls for Ben’s devil-may-care attitude and the warm, soft heart Ben hides behind it.

Beneath the perfect, elegant exterior, Stan has plenty of scars from teenage battles with anorexia. And it only takes the slightest slip for his demons to rush back in while Ben’s away touring with his band. With the band on the brink of a breakthrough, Ben is forced to find a way to balance the opportunity of a lifetime with caring for his beautiful boyfriend.

4.5 out of 5 stars
The Impossible Boy is a new standalone contemporary by author Anna Martin.

For those of you that see that first line - 'This is not your average love story.' - and are hesitant... Please don't be. This is a wonderful romance with two fantastic characters, their relationship, and their own insecurities and issues. It's a sexy, and fun story, and both Stan and Ben are able to work through any issues they experience. It's not complete and utterly angst filled, however Stan has previously battled an eating disorder and talks about it with Ben.

I utterly loved Stan from the first moment he showed up on screen. You honestly don't realize that he's much younger than he is until he tells Ben his age. Stan's character is so thoroughly described that I could envision how he looks, and dresses. The thing that I enjoyed best about the story, is that the author did not have Stan be apologetic for WHO he is. There are so many times I've seen gender fluid characters in books who apologize for liking who they are and how they dress. It was really refreshing to see a character that was comfortable enough with who he was to stay true to himself. That Ben absolutely liked, and then eventually loved Stan as he was, was fantastic. He never once wanted Stan to change who he was.

The story does contain some time jumps especially toward the end when Ben and his band leave for a tour. It was a little jarring when Stan health issues resurface seemingly out of the blue when Ben arrives home. I think the book would have been benefited from showing Stan spiral, not the deep dark details but at least give a hint that the character really wasn't okay missing Ben while he was on tour. That honestly is the only reason that the story didn't get a full 5 stars from me because this  was one of those perfectly character driven stories that I tend to love.

While the time jump is a bit of a jar the remainder of the story showing Stan recovering, Ben hovering but being a loving partner, and Ben's mate Tone stepping up to become a solid friend to Stan really adds to the overall solid storyline. I highly recommend The Impossible Boy as a whole package kind of romance with truly fantastic characters. 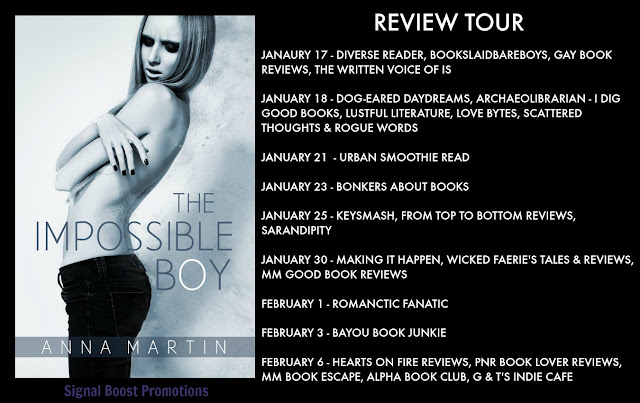 Anna Martin is from a picturesque seaside village in the south west of England and now lives in Bristol. After spending most of her childhood making up stories, she studied English Literature at university before turning her hand as a professional writer.

Apart from being physically dependent on her laptop, Anna is enthusiastic about writing and producing local grassroots theatre (especially at the Edinburgh Fringe Festival, where she can be found every summer), visiting friends who live in other countries, Marvel Comics, learning new things, and Ben & Jerry’s New York Super Fudge Chunk.

Although her most recent work is in the LGBT Adult Fiction genre, in the past Anna has worked on a variety of different projects including short stories, drabbles, flash fiction, fan fiction, plays for both children and adults, and poetry. She has written novels in the Teen/ Young Adult genre, Romance, and Fantasy novels.

Anna is, by her own admission, almost unhealthily obsessed with books. The library she has amassed is both large and diverse; "My favourite books," she says, "are The Moonstone by Wilkie Collins, To Kill a Mockingbird by Harper Lee and Oryx and Crake by Margaret Atwood." She also several well-read copies of Michael Crichton's Jurassic Park books and re-reads the Harry Potter novels with almost startling regularity.

Anna claims her entire career is due to the love, support, pre-reading and creative ass-kicking provided by her closest friend Jennifer. Jennifer refuses to accept any responsibility for anything Anna has written.