Oz by Lily Morton - Release Blitz with Excerpt and Giveaway 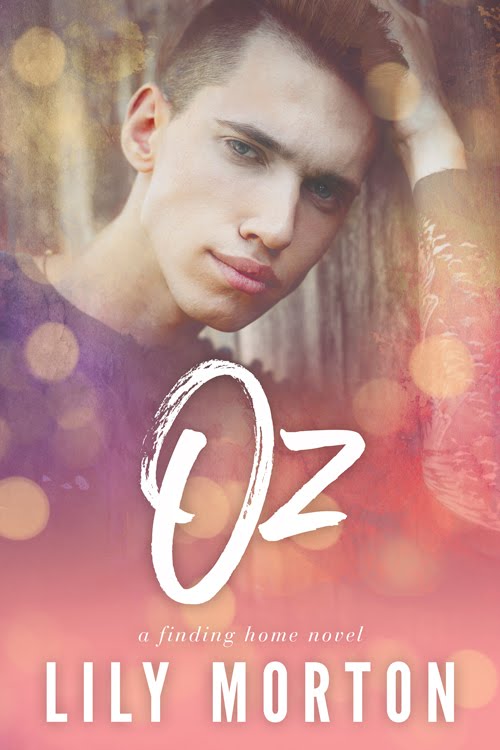 What happens when temporary becomes forever?

Oz Gallagher does not do relationships well. Bored and jobless after another disastrous hook up, he decides to leave London for a temporary job in the wilds of Cornwall. Surely managing a stately home on a country estate will be easier than navigating the detritus of his relationships at home. Six months there will alleviate a bit of his wanderlust and then he can come back to London as footloose and fancy-free as the day he left it.

However, when he gets there he finds a house in danger of crumbling to the ground and a man who is completely unlike anyone he’s ever met. An earl belonging to a family whose roots go back hundreds of years, Silas is the living embodiment of duty and sacrifice. Two things that Oz has never wanted. He's also warm and funny and he draws Oz to him like a magnet.

Oz banks on the fact that they're from two very different worlds to stop himself falling for Silas. But what will he do when he realises that these differences are actually part of the pull to one another? Will falling in love be enough to make him stop moving at last and realise that he's finally home?

That night at midnight I sit at the kitchen table looking over the mass of papers and plans and sheets of paper covered with my sprawling handwriting. I lift my glasses and rub my eyes and look again. No, still there.

I look down at my current huge shadow who is sitting by my chair and watching me with mournful brown eyes. “Are you waiting for me to start screaming, Chewwy, or just bored?”I ask conversationally. He stares at me for a long second and then gives a huge yawn which shows off his massive teeth. I shrug. “Okay, just bored.”

“I didn’t know you wore glasses.”

The deep voice coming from the kitchen door makes me jump. “Shit, you startled me.” I take my black-framed glasses off, feeling slightly self-conscious at being found talking to the dog. “I took my contact lenses out.”

Silas gives me an exhausted smile. “They suit you.”

He comes into the room fully and I look at the tired slump of his shoulders. “Have you been out on a call?”

He gives a jaw-cracking yawn that almost sets me off. “Horse birth that looked like it was about to go pear shaped.”

“Bugger. Was everything okay?”

He nods and grins. “One very pretty filly called Moonshine.”

“Aw, that’s pretty.” I pause. “So, while we had dinner you’ve had your hand up a horse’s vagina.” He nods, biting his lip in an attempt not to smile, and I grin. “After the dinner we had, I have to say your evening looks like it might have been better.”

A burst of laughter comes from him and I smile as he sinks into the chair opposite me. I can’t help the warm feeling I’m getting in my chest at making him laugh. Why, oh why, does he have to be so nice and sleepy looking?

His voice breaks into my thoughts. “How bad was it?”

I shudder. “We had beef casserole.”

He grimaces. “God, I feel your pain. Last time I forced that down I was ten and I had to eat it because my father believed in serving up leftovers until they were eaten.” I stare at him and he nods. “I had it for breakfast, lunch and supper.”

“Did I, fuck. I gave it to Cyclops, our old bulldog. It made him sick, though, so I spent a whole night nursing him and mopping up vomit.” He pauses. “Which was still better than eating that shit.”

I laugh. “Is that where the desire to be a vet came from?”

He stares at the wall, deep in thought. “No. I just think that animals are better than humans for the most part. They’re simple. You love them and they love you back, and no matter how you fuck up they still love you. That’s loyalty for you.” He seems to come to and gives me an embarrassed look.

Lily lives in sunny England with her husband and two children, all of whom claim that they haven’t had a proper conversation with her since she bought her first Kindle.

She has spent her life with her head full of daydreams and decided one day to just sit down and start writing about them. In the process she discovered that she actually loved writing, because how else could she get to spend her time with hot, funny men!

She loves chocolate and Baileys and the best of all creations – chocolate Baileys! Her lifetime’s ambition is to have a bath in peace without being shouted by one of her family.