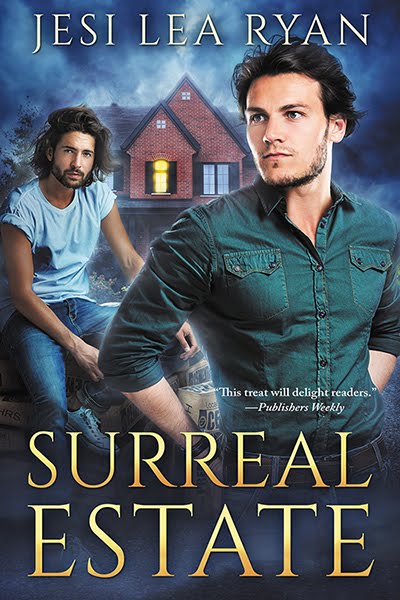 About Surreal Estate
Sasha Michaels is a psychic with an affinity for houses. And he’s homeless. Go figure. After months of sleeping rough, he stumbles upon an abandoned house, and the lonely place beckons him inside. He’s finally safe . . . until someone comes blundering in to his hideaway.
House-flipper Nick Cooper lost everything in the recession. Desperate to revive his business, he turns to a loan shark to fund his comeback project: flipping an abandoned house full of potential. But it turns out the house has an unexpected occupant.
Nick and Sasha make a deal: Sasha can stay in exchange for helping with the renovation. To both of their surprise, the closer they get to the loan shark’s due date, the stronger their feelings for each other grow. Problem is, Nick isn’t the only one with feelings for Sasha, and now the house doesn’t want to let Sasha go.
Now available from Riptide Publishing!

Why I write about addiction


Readers of my work will spot a recurring theme – parents with drug additions.
In my new book, Surreal Estate, I continue this theme with Sasha’s mother. One of the reasons I write about the children of addicts is because there are so many people out there today going through similar issues in their families. It is estimated that in the U.S., over 1.2 million people are addicted to meth amphetamine and 28.6 million are addicted to opioids such as prescription pills and heroin. All those sufferers have people in their lives who care about them – parents, partners, friends, and children. A good number of my readers probably care about someone with an addiction, so hopefully they will relate to Sasha and his conflicting feelings about his mother. The other reason I write about children of addicts is, well, I’m one of them.
Unlike Sasha, I didn’t grow up with hard drugs in the house. There was weed around, but I barely consider that a drug. My parents were hippies, and we were poor, so marijuana was one of those occasional indulgences they had when they could scrape a few dollars together. It was never a problem for them, and they never hid it from me. It just was.
At ten-years-old, my dad split, and I didn’t hear from him for six years. This was back before Internet and email. When his move from Iowa to Utah might as well have been a trip to Mars as far as I was concerned. I was sixteen when he showed back up on our doorstep, new girlfriend and toddler in tow. But that wasn’t all he brought with him. He had a monkey on his back called crystal meth.
As far and being a child of an addict goes, I’ve had it easy. I’ve never had to live with my addicted parent, so that has shielded me from the worst of the day-to-day problems. I’ve never had to call 911 while my father overdosed on the bathroom floor. I’ve never had to watch my father debase himself in desperation for just one more hit. However, I have had to alter my relationship expectations to allow for dishonesty and unreliability. I had to sit with my father in the hospital for four days, holding his hand as he detoxed only for him to go back to the drug a few days later. I have had many, many calls from my aunt and cousins informing me that my father was in the hospital and not expected to live through the night. (Spoiler: So far, he has always found some way to pull through.)
While Sasha had to live in closer proximity to the drugs than I ever had to, I have felt every one of his emotions. Embarrassment, frustration, abandonment. The war inside you over whether you love your parent or hate them for what they’ve put you through. The desire for them to get better, and the need to wash you hands of the whole damned thing. The feeling of “why won’t they just die already!” and the guilt for even thinking such a thing.
My hope for readers who are living through a similar situation that they will realize they are not alone. There are millions of us out here who are experiencing they same conflicting emotions, and they are not wrong. You have every right to feel how you do. I also hope that if any readers are struggling with addiction, there might be something in Sasha’s story that will encourage them to get help. If you or a family member are suffering with addiction, please call one of the national hotlines below. It is never too late.
In the United States: 800-662-HELP (4357)
United Kingdom:  0300 123 6600
Canada:  833-235-4048
Australia: 300 368 186

About Jesi Lea Ryan
USA Today bestselling author Jesi Lea Ryan grew up in the Mississippi River town of Dubuque, Iowa. She holds Bachelor's degrees in creative writing and literature and a Master's in business administration, along with an assortment of Associate's degrees, certificates and designations, none of which have anything to do with writing books about psychics.
Jesi considers herself a well-rounded nerd. She loves studying British history, exploring foreign cities on Google Earth, watching TED talks, listening to true crime podcasts, floating in her pool, and reading or listening to books — approximately two hundred books a year in many different genres. The side effect of all this is that she’s the ideal person to have on your trivia team, or what a former co-worker called “a dump truck of knowledge.
Her biggest vice is procrastination. #TheStruggleIsReal
Jesi spent most of her adult life in Madison, Wisconsin, but now lives in Maricopa, Arizona, with her spouse and two exceptionally naughty kitties. Summers may be brutal, but at least she doesn't have to shovel the heat off her driveway.
Giveaway
To celebrate the release of Surreal Estate, one lucky person will win a $20 Riptide gift card! Leave a comment with your contact info to enter the contest. Entries close at midnight, Eastern time, on November 10, 2018. Contest is NOT restricted to U.S. entries. Thanks for following along, and don’t forget to leave your contact info!