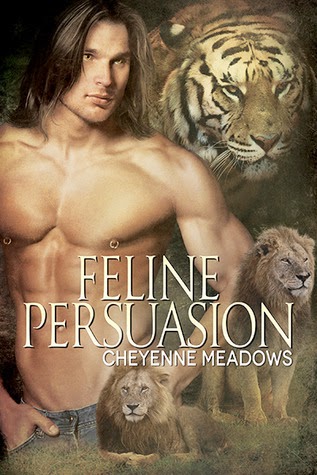 When tiger shifter Cade turns an oily owner of a consultation firm over to the FBI, he finds himself with a hit man on his heels. Chester was in possession of security-breaching national secrets, and even more concerning, evidence that shifters exist, and if it got out, trouble would follow for all shifters. So now Cade is on the run. He holes up in an isolated hideout where he doesn't expect anyone to find him--least of all a former one-night stand.

Alpha lion shifter Micah can’t shake Cade from his mind. They spent one glorious night together before Cade ran off without leaving even a name. He’s determined to find his runaway and protect what he's come to think as his despite Cade's one and done rule. He surprises Cade in his secret nest in the forest, learns the reason for Cade's self-imposed exile, and decides to call for help. This nets them Stone: a top-of-the-line bodyguard and the one man Micah can’t stand. Stone isn't thrilled either. He can think of better things to do than spend days in the wilderness with the uppity alpha who stomps on his last nerve.

Despite their differences and history, they need to find a way to survive and expose the traitor in their midst. They also realize chances at love are fleeting unless you grab the opportunity between your teeth and hold on for one wild ride.

What happens when a lion shifter gets all hot and bothered over a fiery tiger shifter? Well you go after that tiger shifter with all your might, and that is pretty much what Micah does with Cade.

We meet our fierce lion shifter, Micah, out one night at a bar, trying to kill the restless edginess he’s been feeling. He spots Cade, who never introduces himself, and ends up going back to Cade’s hotel with him. They end up feeling this super intense connection, but Cade doesn’t believe in forever. In fact, Cade is lucky to believe in the now of things, as his life is in danger and he’s on the run from someone he worked for. After their night of fiery hot sex, Cade up and leaves without a glance back at the man left behind.

Fast forward a bit, and Micah stumbles on a picture of Cade in a story in the newspaper that causes him to worry and decide to go after him. Cade made one small mistake on their night together; he shared with Micah the location of his isolated cabin. Without fail, Micah packs a bag and heads out to find this cabin to see if Cade is hiding there. Cade reluctantly shares what is going on with Micah, who enlists the aid of the Lion Council, but Micah didn’t expect them to send out one of his least favorite people to help protect Cade. Stone and Micah are like oil and water, shake them up and they slide over each other and then they separate and glare at each other. Adding Stone into the mix with Micah and Cade just sets all three of them on fire and makes things a little more complicated.

The suspense portion of the story is actually pretty good, so is the heat between Micah, Stone, and Cade. There were a few little things, however, that just didn’t work—for me anyway—to show that they would be a long term triad. Or, really, even a triad that might work for the short term outside of the wildly fantastic, spicy hot sex. The friction and heat between Stone and Micah would have easily made them a solid couple on their own. Cade almost seemed too indifferent to Micah, even though they were very sexually attracted to each other. I never felt that moment between them where they clicked into place as a solid couple.

Now that’s not to say the story didn’t work for me at all; overall it did. I liked the interaction between Stone and Micah, and Stone and Cade, and then among the three of them together. I would love to see more of the Lion Council and how they work, and more of the Lions themselves. I will definitely look for other books by this author in the future.

I would recommend Feline Persuasion for anyone who likes their shifters hot, Alpha, and sexy as all hell. Also, for those readers that like a little ménage in their romance.
Posted by Wicked Faerie's Tales and Reviews at 10/05/2014 07:48:00 PM