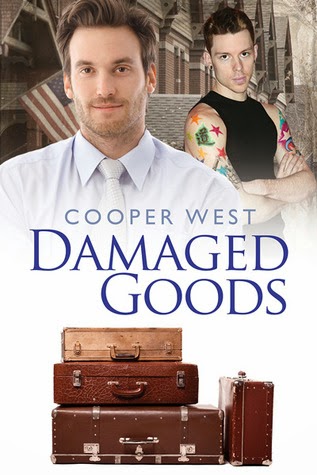 Professor Jesse Ford feels like a failure in both love and life. He's moved home to live over his mother's garage after his previous relationship ended in heartbreak and a minor academic scandal, derailing his career. Tired and disappointed, he holes up to lick his wounds and concentrate on his next book, determined to avoid anything having to do with love or romance.

Jesse starts to change his mind when he meets Templeton, the beautiful and engaging punk rocker working as a short order cook at their small town's popular diner. Templeton, a talented musician, is back in town after escaping from his abusive boyfriend back in Seattle where they had tried to start a band. Encouraged by friends and family, Jesse and Templeton realize they can't fight their mutual attraction.

The two men from very different worlds decide they might have a chance, but they find their tentative romance threatened by the many secrets Templeton is keeping, and Jesse's own bruised heart. When Templeton's dangerous ex shows up, both Templeton and Jesse have to decide whether their fledgling relationship can withstand facing the demons of their pasts.

Jesse was an up and coming professor at Princeton until a scandal with his now ex-boyfriend sent him home. He ends up living back at his mom’s, in her garage apartment, feeling like he’s at loose ends.

Then there is Templeton, who I really liked. He’s a musician who’s moved to town with basically the clothes on his back. He’s kind of a stand out in this quieter town because of his tattoos, hair and piercings. Templeton also projects an air of vulnerability that really draws Jesse to him. They basically fall into an opposites attract relationship, but there are secrets and issues that neither will share nor are willing to face.

As I said above, I really liked Templeton out of the two main characters. He’s the type of character that if he were real, I’d be friends with him. However, as opposites attract, he and Jesse didn’t really seem to feel like they would be a long term kind of couple. While they’re both damaged, I think Templeton needs someone much stronger to be his relationship base. Jesse, on the other hand, would want to fix him instead of letting Templeton fix himself. I also didn’t see Jesse as breaking out of his own semi-conservative mold.

I liked Damaged Goods. It had a good storyline and decent characters, but for me it didn’t live up to its full potential. There were good moments to the story, though, for each of the main characters. Jesse’s interaction with his mom, and the times he was with his friend Danny, were cute, funny, and brought out the best in the character. Really, it almost felt like the author had wanted to develop a relationship with Jesse and Danny but went in the other direction. Templeton had some sweet moments with Jesse’s mom, and really his story, overall, was very compelling.

This is a story that had good bones and solid structure, so I do recommend that you give it a try. After all, we all have different opinions of what makes a story right for ourselves. If you like opposites attract, this is definitely one you should check out.