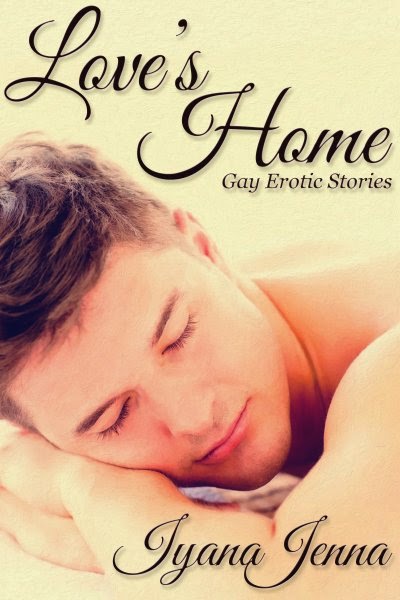 
Publisher: JMS Books
Pages: 268 pages
Cover Artist: Written Ink Designs | http://written-ink.com
Blurb:
Sometimes you need a break, to get away somewhere, but in the end you always return to a place you call home. The saying goes, “Home is where the heart is.” It doesn’t matter if it’s big or small, pretty or shabby, what matters is it’s your Love’s Home.

This collection features five of Iyana Jenna’s best-selling gay contemporary romance stories. A homeless PA finds a home in an actor’s life. An abduction almost steals a man from his loving boyfriend. A love triangle nearly ruins everything. A sex slave is rescued by an unlikely savior. A young man discovers a new home after he loses everything.


Excerpt:
A Home for Jesse
This ain’t so bad. Jesse pats his laden backpack. He stretches himself on the bench and lowers his head onto the bag, grimacing at the bumps pressing against his head and neck. Awesome. He is going to have major cricks and headaches come morning. That is if he’s not suffering from early signs of pneumonia.

Jesse shifts and grunts and finally gives up. He sits up, takes off his jacket, and spreads it over his front before he lies down again. Moving a bit again to find the most comfortable position, he thinks, Fuck, now my shorts are stuck in the crack of my ass. Jesse reaches down and pulls them free -- ah, that’s better.

He takes a deep breath. So he’s a bum now, is he? His ma would be heartbroken if she knew. She could blame him for being such a hard head and insisting on having his own way. Jesse stares blankly at the leaves swaying on treetops, at the shadows of the swings dancing in the dark, at the stars blinking mockingly down at him. At least the fact that they are up there means that the sky is cloudless and Jesse doesn’t need to worry about the possibility of rain tonight. Getting soaked when the only place he has to sleep is this park would be a pain in the ass, not to mention hazardous to his health. Jesse also hopes no cops will come patrolling tonight.

Weary to the bone, Jesse curls both hands under the side of his face and gives in to slumber.

Another thing Iyana loves is kitties. Right now she has three of them. Their names are Cil, Horus, and Betsy, and one kitten. When she doesn’t write, she plays with them, or they would play with her when she writes.