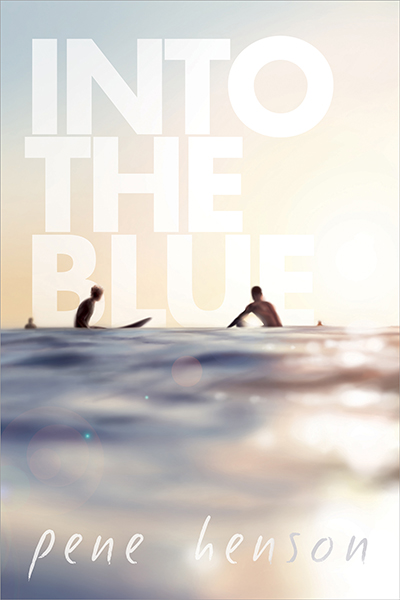 Tai Talagi and Ollie Birkstrom have been inseparable since they met as kids surfing the North Shore. Now they live with their best friends in a pulled-together family, sharing life and the saltwater in their veins. Tai’s spent years setting aside his feelings for Ollie, but when Ollie’s pro surfing aspirations come to fruition, their steady world shifts. Is the relationship worth risking everything for a chance at something terrifying and beautiful and altogether new?

Across from them, one of the Brazilians plays guitar. Ollie doesn’t recognize the song even when a couple of others sing along. The beach is wider and the sand finer than on the North Shore, but every beach is a little like home. Ollie misses the Blue House; he misses the surf and the palms and the shoreline he knows so well. He misses Jaime and Sunny and Hannah. Still, though he’s as far from home as he’s ever been, Ollie’s comfortable. These are his people, too. He leans back on his arms and looks up into the dark.
He’s watched the night sky since he was a little kid, but down here in the Southern Hemisphere he doesn’t recognize the hundreds upon hundreds of stars. The Southern Cross is up there. Ollie tries to orient himself.
Tai shifts toward him, then looks up and follows Ollie’s gaze. The warmth of Tai’s body settles into Ollie’s heart, grounds him. Ollie leans into him a little, and their arms brush to the elbow. The contact simmers in the air between them.
Unexpectedly, Ollie knows what he wants. “Come back to the hotel,” he says quietly to Tai. He pitches his voice low. It hums across the tiny space between them. No one else can hear him over the pounding surf and the sound of the music. It’s easy to be bold in the dark of a beach where Ollie’s never been before. He’s shocked by that same boldness.

Today I’m very lucky to be interviewing Pene Henson, author of INTO THE BLUE.

Hi Pene, thank you for agreeing to this interview.

1) How do you develop your plots and characters?

I find plot more difficult than character. The characters spring fully formed, as though I just need to think further on them and never need to develop them. I always know what their favourite animal is or whether they think that’s a silly question.

But plot I develop in layers, once with a broad arc, then by writing and then realizing I’ve stalled impossibly for a week so probably actually don’t know what’s happening next. Then I think it all through until I can write again.

2) Who doesn’t love a good hero? Tell us about your protagonist. Was there a real life inspiration behind them?

I have two protagonists, Tai and Ollie. They’re young guys, 22, and live on the North Shore of Hawaii. They’ve known each other since they were kids and have been best friends almost since they met. Their world is the ocean and the waves and they try to ignore the fact they need to pay rent.

Tai is a surfer and board shaper and their little family’s anchor. He’s sociable, comfortable with everyone, easy in his skin, capable and kind. He wants everyone to be happy, especially Ollie. Ollie is fiercely reserved, focused, uneasy with affection but immensely loyal and a talented surfer.

3) What real-life inspirations do you use when world building?

I use a lot of visual inspiration, setting myself up with pinterest boards and sending myself pictures of surf and sky and people. I also find inspiration in music, in the perfect tiny lyric. Then I play it over and over until I kill it.

4) Did you learn anything from this book and what was it?

I learned a lot about waves and the ocean and surfing comps and the great beaches of the world. And something about how we build families with people we’re not related to.

I’ll choose tagadashi tofu and ginger stir fried vegetables and jellybeans. But honestly, I’m not thinking about food if it’s my LAST MEAL ON EARTH!

Pene Henson has gone from British boarding schools to New York City law firms. She now lives in Sydney, Australia, where she is an intellectual property lawyer and published poet who is deeply immersed in the city’s LGBTQIA community. She spends her spare time enjoying the outdoors and gazing at the ocean with her gorgeous wife and two unexpectedly exceptional sons. Into the Blue is her first novel. 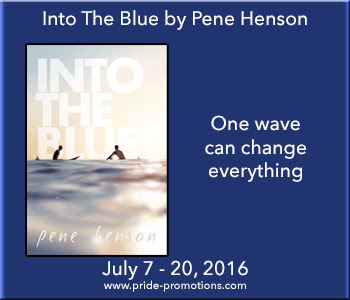