When Officer Rick Boyd answers a call about a peeping Tom, he doesn’t expect to find a gorgeous woman holding the binoculars. But Gina Silvano’s no peeping Tom, and she can catch her cupcake truck’s kinky vandals herself, thank you very much. No sexy cops required.

No matter how hot their stakeouts, by-the-book Officer Boyd can’t see a future with a dangerous, rule-breaking wild-child who despises the law. He’s never felt more alive, though, and expunging her from his heart might be impossible. But loving each other might cost them more than they are able to give.

Joe looked her over and then glanced back at Rick, who for the first time looked more uncomfortable than amused. “We gotta frisk her,” he said.

Joe looked at him in surprise. Rick shrugged. “I know she’s not armed and she wouldn’t hurt us if she was. She’s not a criminal.”

Gina’s eyes narrowed. “Gee, thanks for the vote of confidence.”

That sexy half smile touched his lips again, and Gina clenched her stomach muscles in an attempt to keep that little electric jolt from spreading through her. No such luck.

“Look, I may not be as much of a stickler for the rules as you,” Joe said. “But if she’s going to be in the car uncuffed, she needs to be frisked. I’ll do it if you’re not comfortable.”

Rick shot his partner a surprised and unhappy look. “No. I’ll do it.”

“Really, boys. Fighting over who gets to feel me up is so grade school. One of you just do it, already.” She leaned against the truck, arching her back a little as she looked over her shoulder. If she had to do this she was going to enjoy it. And make it as hard for Officer Boyd as she could. Pun totally intended. Nothing like a little payback torture to perk a girl up.

Her eyes met his and held, their gazes transmitting a scorching heat that sent a shiver running down Gina’s spine. She knew she was in trouble. She knew people were watching. She didn’t care. The thought of Rick’s hands on her made her heart jackhammer in her chest. Not that she thought he’d dare. He’d chicken out for sure.

Joe took a step toward her and Rick blocked him, his hand slapping against the other man’s chest. His eyes didn’t leave Gina’s until he was standing inches from her. Then he let his gaze roam over her, from head to foot and back again. He leaned over her and grabbed her hands, moving her around the side of the truck so the vehicle shielded her from the gawking occupants of the bakery. He slapped her hands back down and kicked her feet farther apart. Her breath caught in her throat. His hands trailed across her shoulders, up under her hair and then down her back. His huge hands spanned the whole surface of her back, with his fingers trailing down her sides. Then they moved up the front. She held her breath, her teeth biting her bottom lip as his hands came within a hairbreadth of her breasts. Then they moved away.

His hands skimmed up her legs to her thighs, and a small moan that she couldn’t catch fast enough escaped her lips.

Rick immediately stepped back. “I think that’ll suffice,” he said, his voice gruff.

Gina straightened and looked back at him. “Not nearly. But it was a good start.”

Instead of being surprised or shocked, as she’d intended, Rick smiled that sexy bedroom smile of his. “That was me doing my job,” he murmured. “If I had any intent other than arresting you, that wouldn’t have even counted as preliminary foreplay.”

Gina swallowed and forced herself to drag in a lungful of air. He was toying with her. And heaven help her, she was loving every second of it. Aside from the minor detail of her arrest. That part sucked. 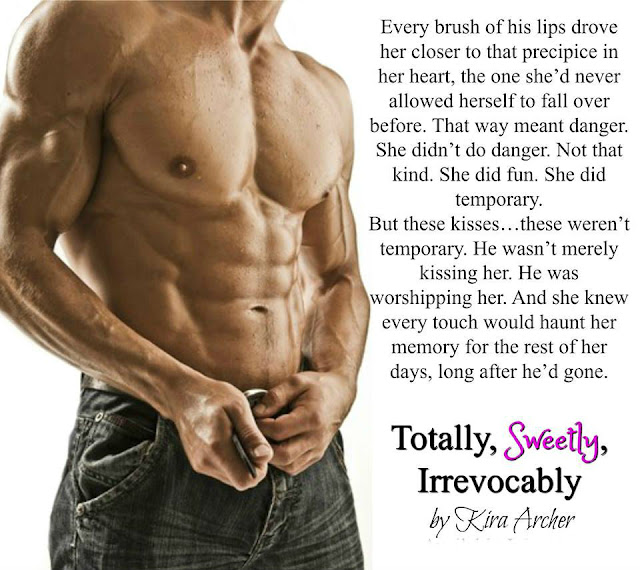 DON'T MISS THE FIRST BOOK IN THE SWEET LOVE SERIES...

An inherited parking spot. That’s all it took to make Natalie Moran’s food truck dreams come true. But her dream space is attached to a bakery inherited by someone else—drop dead gorgeous Eric Schneider, a financial consultant who wouldn’t know a cupcake from a cannoli. And he wants to buy Nat out, no matter what she has to say about it.

Eric’s determined to build his own business, but he needs the super cute klutz with the cupcake truck to help. If Nat will teach him the basics of running a bakery, he’ll give her free kitchen time.

Except…neither expects the heat burning between them or the possibility that their arrangement might become permanent. When it all blows up, Nat is convinced his actions mean betrayal. It’s up to Eric to regain her trust and show her he’s a man who is truly, madly in love with her, before she disappears from his life forever.

Music is a very strong inspiration for me. It isn’t necessary for my writing process, but it can really help set the mood or get a scene in my head if I need a little help. And as it is summer and my kids are home all day, it’s also great for drowning out the background noise ;-) I tend to listen to instrumental music when writing as lyrics can be a bit difficult to tune out sometimes. My go-to faves depend on the mood I’m going for. For more angsty/sad/tense scenes I gravitate toward The Piano Guys, Evanescence, Apocalyptica, E.S. Posthumus, and Rob Dougan.

My current release, Totally, Sweetly, Irrevocably, is a funny book with characters who enjoy pushing each other’s buttons. So I kept the music light and upbeat. My playlist mostly consisted of Lindsey Stirling and Parov Stelar on Pandora. A few of my favorite songs of theirs:

I also listened to my Old School playlist quite a bit – gotta love that 90’s music ;-) Some faves from that list are:

Mainly anything that made me want to dance or put a smile on my face was good for this book!

Kira Archer resides in Pennsylvania with her husband, two kiddos, and far too many animals in the house. She tends to laugh at inappropriate moments, break all the rules she gives her kids (but only when they aren’t looking), and would rather be reading a book than doing almost anything else. She has odd, eclectic tastes in just about everything and often lets her imagination run away with her. She loves her romances a little playful, a lot sexy, and always with a happily ever after.