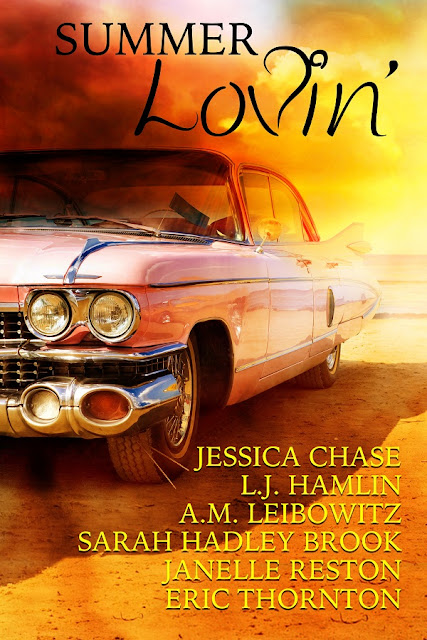 Back in the 1950s, leather jackets, white t-shirts, and poodle skirts were the biggest styles, and going “parking” was all the rage. Summer flings were the thing to do, whether it be with the cute tomboy that caught your eye in school, your older brother’s friend, or the hot mechanic who fixes your car just right. In Summer Lovin’, love doesn’t only have to last the summer.

These six stories are penned by both seasoned scribes and new authors; the anthology provides readers with the perfect opportunity to explore offerings from their favorite storytellers as well as find a new favorite or two.

Billy startled at the deep, husky voice near his ear and turned to see his new acquaintance leaning into the car, watching him closely. He swallowed and tried not to focus on the musky scent rolling off the dark haired stranger. Fighting the urge to lean in and breathe him in, Billy’s eyes swept over the chiseled jaw, dark stubble and, oh god, those full rosy lips, before rising back up to meet his gaze. Deep chocolate eyes peered into his green ones, searching for something. Wait… He asked something, right?
“Umm, what did you say?”
A smile spread across his face and Billy trembled. God, he was the sexiest man Billy had ever seen.
“I asked if you were okay,” he repeated slowly.
Billy’s eyebrows furrowed then, and he looked down at the keys in his hand, his mind trying to process something. His eyes widened at the memory and he turned his gaze back at the stranger. “Wait! Did you call me ‘little man’?” he asked, incensed.
The sexy man nodded.
Billy harrumphed, his irritation obvious.
“Give me your name and I’ll stop calling you that,” the greaser offered, still smiling. The dimple in his left cheek only upped his sexiness.
“William Hadley. Billy,” he whispered, his cheeks heating up. “And, I’m five eight,” he huffed. Why did he say that? Why did he care what this guy thought of him?
“Well, Billy,” he leaned in closer, letting his breath ghost across Billy’s face. “I’m Gene Milgram and it’s a pleasure to meet you.”
“Gene,” Billy repeated, letting the name roll around on his tongue for a minute and swallowing hard when he realized Gene was still leaning into the car. “Um, I guess I need to call someone to tow it, huh? I wonder if there’s a pay phone anywhere near.”
Gene grinned. “Nope. But I can help you.”
Billy’s eyes widened. “You can? On a motorcycle?” He glanced back uncertainly at the small bike. “Um, yeah, I don’t think that’s strong enough to—”
Gene’s laughter rumbled out into the darkness and Billy looked him as if he was crazy. Did this guy seriously think a motorcycle could tow a big car?
“Sorry, Billy,” he chuckled. “No, I didn’t mean my bike. I own an auto shop and I just closed up a little while ago. Why don’t we just head back and get the tow truck and take care of things?”
“We?” Billy squeaked, glancing at the motorcycle again, his heart hammering in his chest.
Gene waggled his eyebrows at him, laughing. “Well, yeah, I can’t just leave you here in the dark. What if another opossum decides to pull something crazy again?”
Billy felt his face heat up. He knew Gene was just being friendly, but it had been a long time since another man had made him feel so off-kilter, even though he was sure Gene was straight. He looked back over his shoulder again and wrestled with his fear of motorcycles. Something told him that he could trust this man, though.
Sighing deeply, he finally nodded. Gene pulled the car door open and waited, his hand on the door handle. Once he climbed out, he felt a little lightheaded, swaying a little before Gene’s arm snaked around his waist, holding him close to his side.
“Whoa, there. You feeling dizzy?” Gene’s mouth was so close his breath caressed Billy’s neck, sending a shiver down his spine.
Billy nodded a little, feeling foolish. “My head hit the steering wheel, but my arms cushioned the blow. I think…I think I’m just a little dazed.”
Gene nodded his understanding and helped him up the short hill to his bike, parked on the side of the road. Billy startled when he saw it up close.
“That’s a 1947 Triumph Speed Twin! Is that a custom paint job?” Enthusiasm won out over his fear as he leaned in and traced his fingers along the seat.
Gene’s eyes widened in amazement and he finally let his arm slip away from Billy’s waist. “You know about bikes?”
“Yeah, a little. When I was a kid, I dreamed of owning one, but my mom always said they were too dangerous, of course. Then when I saw James Dean riding one, I decided to learn more about them. Last year, I finally decided to try taking a spin and I…I…” His face reddened and he looked at the ground. “I fell off the bike before I even started it,” he admitted.
Gene chuckled a little, but wisely kept his thoughts to himself.
Billy smiled, “Yeah, it wasn’t funny at the time, but…” He cleared his throat. “So, um, how do we do this?”
The greaser handed him the helmet. “Only got one and no way am I letting you ride without one.” He grinned. “You seem a little accident-prone to me.”

From “The Great Pretender” by Sarah Hadley Brook 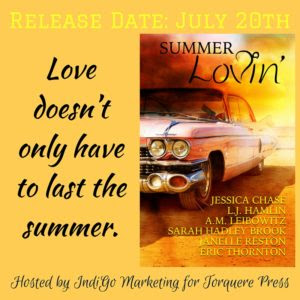 LJ Hamlin - L.J.Hamlin is a twenty something (getting older every day) writer, who has been writing all her life, mainly in notebooks no one else ever saw. But then she found M/M groups online and was encouraged by friends to share her stories. After a while (with a lot of pushing) she got brave enough to try getting published, so she could share with more people, and she hopes to never stop. LJ loves cats, and pretty much all animals, is a collector of many things, often weird, but most of all books.
Facebook Author Page: https://www.facebook.com/L.j.hamlin91
Twitter: https://twitter.com/LjHamlin
Blog http://ljhamlinbooks.blogspot.com/

Jessica Chase - : Jessica Chase has been writing for what seems like her entire life, and finished her first short story at the age of five.  It wasn’t very good.  Since then, she’s improved a great deal, but writing has continued to be her passion.  She loves reading and enjoys exploring the worlds of others as well as creating her own and has been involved in several writing groups.  She writes all kinds of relationships and is always looking to write more, but M/M and F/F romance is something she is particularly fond of.  She enjoys fantasy and horror, and loves putting her own spin on the genres and creating interesting characters and worlds.  Jessica studied at Oxford University and fell in love with the city and its weird quirks and traditions.  She still reads anything she can get her hands on and spends her weekends wandering around various museums and old houses, walking through the countryside looking for inspiration, or sitting in the garden and playing with her pet tortoises.  She is lucky enough to have the support of some wonderful friends.
Website: http://chasestories.webs.com/
Facebook: https://www.facebook.com/jessica.chase.96387
Twitter: https://twitter.com/jchasestories
Pinterest: http://www.pinterest.com/jessicachasewri/
Other Social Media: http://JChaseStories.blogspot.co.uk

Sarah Hadley Brook - Sarah Hadley Brook lives in the Midwest and is a mother of two wonderful young men. During the day, she works in the non-profit world, but reserves evenings for her hobby-turned-passion of writing, letting the characters she conjures up in her mind take the lead and show her where the story will go. When not working or writing, she can be found reading, working on dollhouses, trying her hand at new recipes, or watching old movies and musicals. She believes in “Happily Ever After” and strives to ensure her characters find their own happiness in love and life.

Rafflecopter Prize: One winner will be selected to win an eBook copy of the Summer Lovin' Anthology.