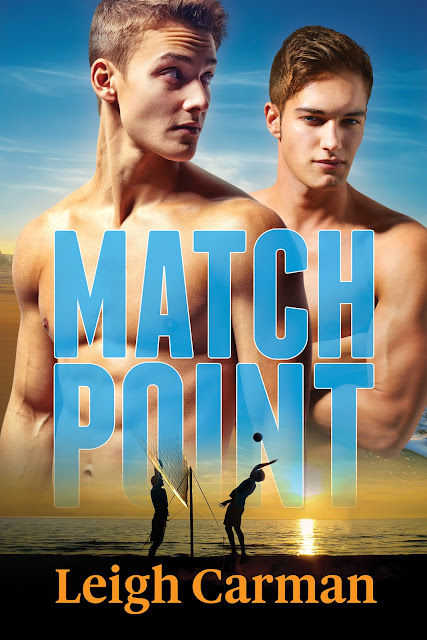 Two stubborn men.
One is a rude jerk. The other, the life of the party.It was hate at first sight.Pro beach volleyball players Finn Callahan and Dexter Savage have been rivals since college. While Finn always comes out on top on the court, Dexter’s carefree and fun-loving personality earns him scores of adoring men and women. And as much as Finn fights to deny it, there’s another reason for the tension he feels when Dex is around. Hate wasn’t the only thing he felt when he first laid eyes on his opponent.When they’re forced to team up, the two men must bury their differences—on and off the court—if either of them is going to succeed professionally.

Finn and Dex are the epitome of frenemies since they met in college. Friendly enemies who happen to play the same sport and constantly try to one up the other. Finn and his teammate, Tris are on top of the beach volleyball ranks. They're rock solid, winning most every game and tournament they enter. Dex and his teammate always seem to be chasing after them. Dex is desperate to one up Finn to the point where their rivalry ends up looking more like hatred. Then tragedy strikes Finn and he drops off the PBVA circuit leaving Dex and his teammate to step into the championship spot.

Dex is elated that they're on top of the PBVA circuit until his teammate ends up with a career ending injury and he has to find another partner. Dex has a momentary panic attack because to him security is money coming in, sponsors paying him, making money from the tour, etc. His childhood has left scars that have made him push himself so hard and shaped him into who he is now. While he isn't happy to have to learn to work with a new teammate he's resigned because his need to have monetary stability outweighs pretty much everything else. Then he finds out who his new teammate is...Finn.

There are a lot of plot points that could easily be spoiled by sharing more of the details of the story so I'll leave those to you to read and enjoy first hand. I was pretty excited to read match point even prior to getting an ARC because I've always loved to watch beach volleyball. It's a perfect warm weather sport and shows off the players bodies to perfection. Match Point really did dig into the sport in the storyline, which I really liked but the main part of the story is the antagonism between Finn and Dex. Obviously there is way more to their story then just antagonism though and their working together as a team creates friction which leads to both men pissed off at the other but riding that fine line of lust/hate, too. Which of course Dex refuses to allow himself to think about because of things that happened when he was a young teenager.

While the antagonism between them is seriously hot, there are times I wanted to slap both of them for not talking to each other and that's the main reason this isn't a higher rated read for me. The antagonism/hatred was a lot about no communication along with a huge dose of stubborness, along with fear of the future. I'd really have liked to see more of the relationship developing between Finn and Dex, or even bits and pieces from college when they first met to see if there was something there even then. Again though, the story is good, the characters are rock solid, and I did enjoy the book. I just like more relationship development between the two of them. And even a bit more backstory on both of them to flesh out their story.

Match Point is definitely a good, strong read and perfect as a summer read even. I recommend that while I had minor issues with the book that readers give it a try because what doesn't work for one reader is perfectly fine for the next.

I do look forward to reading more books from this author in the future.

Leigh Carman is the M/M writing alter-ego of Heather C. Leigh.
Heather C. Leigh is the author of the Amazon best selling Famous series. She likes to write about the 'dark' side of fame. The part that the public doesn't get to see, how difficult it is to live in a fishbowl and how that affects relationships.Heather was born and raised in New England and currently lives outside Atlanta, GA with her husband, 2 kids, and French Bulldog, Shelby.She loves the Red Sox, the Patriots, and anything chocolate (but not white chocolate, everyone knows it's not real chocolate so it doesn't count) and has left explicit instructions in her will to have her ashes snuck into Fenway Park and sneakily sprinkled all over while her family enjoys beer, hot dogs, and a wicked good time.