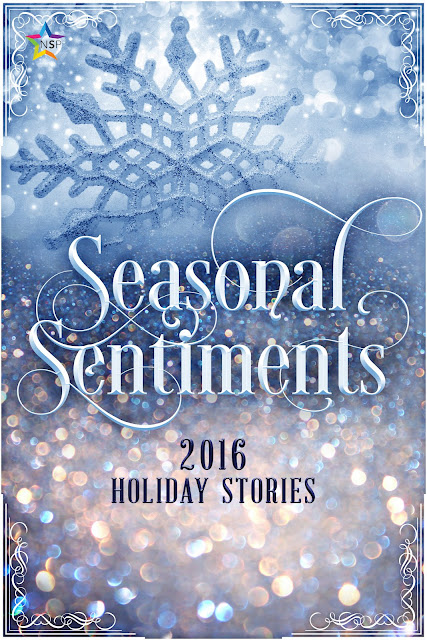 Dave Cunningham hates the rampant consumerism that’s come to dominate his family’s Hanukkah celebrations. But a chance to bring a bit of a holiday happiness to his long-time crush, Amit Cohen, helps put him in a more festive mood. In the quest to craft the perfect gift, Dave tries to urge a few personal details out of stoic Amit. Unintentionally, he learns the Cohen family’s secret: Amit is a golem. But Amit has a problem that runs deeper than his magical origin, and a Hanukkah miracle might be the only thing that will keep the budding flame between him and Dave from going out.

Nate Beckett doesn’t expect much from life, and he definitely doesn’t believe in New Year’s celebrations or resolutions. A happy New Year? Not likely. As the manager of McGee’s bar, the best he can hope for is a drama-free night. One glance at the sexy young man on the dance floor and that hope is long gone. Once again, his young neighbor Justin is back to tempt and torment him. Despite the undeniable attraction, Nate knows he’s too old and jaded for someone like him, so the time has come to reject Justin. It’s for his own good! Justin may be young and inexperienced, but he knows what he needs. His New Year’s resolution—to tempt and win Nate over. One lame seduction attempt later, and he’s on his way home in a cab. Alone. But later that night, Justin wakes up battered and bruised on Nate’s doorstep, and Nate insists that Justin stay with him. The big, beautiful man’s protective and caring instincts are definitely kicking in. Maybe, just maybe, there’s a chance for a happy New Year after all!


Of Christmas Past by Teryn Day

Jonathan Barthes has always been able to see—and speak to—the dead. Unfortunately, restless spirits tend to be somewhat needy, and his “gift” has cost him everything from a promising acceptance into med school to a long string of failed relationships. Unable to find a purpose after a terrible autumn semester, he accepts his aunt’s offer to become the caretaker of one of the estates his great-uncle left her over the holidays. He expected the restless spirits: the little girl, the mean governess, and he especially expected the ghost of the vindictive young man who calls himself Cecil. Cecil's handsome enough when he’s not making the mirrors bleed or the radios speak in tongues. As the year crawls on and reaches its end, however, Jon begins to help Cecil uncover the mystery of his life—and his tragic death. Jon had a dream of helping the living—but maybe, just this once, when he helps a ghost, that ghost will help him back.

A Jag with out-of-state plates is the last car Scott DeLaney expected to find when answering a tow call as a favor to his drunken godson. But, the tall man in the fedora seems like a nice reward until Scott finds out the stranger's destination. Yes, he'd take care of the brooding man, but he has a selfish reason for it. Finding himself in a ditch after dodging a deer is the least of Patrick Samuels's problems when his rescuer arrives, wearing a tuxedo and driving a hot pink flatbed. Perhaps his older brother’s scheme will benefit Patrick after all. Who knew that a New Year’s kiss is far more efficient than any boardroom strategy to seal a deal?


Stone and Shell by Lloyd A. Meeker

Eight-year-old Howie Evinger is convinced that his dad would be happier if he found a new husband. Howie would be happier, too. And somewhere out there in the city of Vancouver, there's the right man for his dad to love. But how to find him? That’s a problem, especially if you’re just a kid and your dad says he doesn’t want another husband. With the help of his quirky aunt, Shanna, who calls herself a Buddhist Wiccan, Howie builds his very own solstice altar with cool symbols to support his search. It has a candle, a feather, and a twisty stick, plus an agate for his dad, and a scallop shell for his new husband. Share Howie’s solstice adventure as he learns how real magic requires courage and patience as well as symbols.


One Wish by Caitlin Ricci

Christmas is supposed to be a time of happiness and family, but after a tragic accident the year before, Callen is left feeling the complete opposite. He's sad, miserable, and angry at everyone and everything. Harry is an elf sent to bring Callen some joy. It's one thing when a child stops believing in Christmas—that happens all the time—but Callen loved everything about Christmas, and Santa needs him back. Harry is there to grant Callen one wish in the hopes of making him feel better. One wish to bring Christmas back to a man who hates the very thought of it.

Tired of being ridiculed as the man dumped in favour of an ugly Christmas sweater, Aston is determined to get revenge--by having his dream vacation at Ibiza's hottest clubs! He's even planned a social media campaign to make sure his ex, Dan, knows exactly what he's missing. When a snowstorm strikes, and Aston's media campaign takes off before he does, he finds himself propositioned by his unwelcome roommate Mike: trade vacations, or Mike will out Aston as a fake. Desperate to save his reputation, Aston finds himself in Finland--and falling hard for a man with a sweater almost as terrible as Dan's. Worse, Laaksonen cares as little about impressing people as Aston cares about being nice. Aston knows he has too much self-respect to fall for a man so hazardous to his reputation. But the long Polar Night poses the ultimate test to his Ibiza club dreams...

Khafra has spent more than three thousand years wandering the Earth, fascinated by humanity and its many rises and falls. When he meets a young student at Cambridge, he is utterly unprepared for the effect Alfie has on him. Eager and open and full of wonder, Alfie is perhaps the perfect submissive. While the sex is spectacular, the real surprise for Khafra is his growing love for Alfie. Such unions are grand while they last, but inevitably doomed to time and mortality. Can he open his heart one more time, for a beautiful young man whose defiance of custom and courage in the face of danger are so captivating? Or will he continue as he has for so long, living on the fringe? Everything depends on the outcome of Epiphany.


A Christmas for Oscar by Alex Whitehall

Oscar has never liked the holidays and all the surrounding rigmarole, but that doesn't stop his best friend from dragging him along for her Black Friday shopping spree. The only perk of the day is that he meets Nathan while he's there. With sparkling blue eyes, curly blond hair, and a smile that won't stop, Nathan is a Christmas elf in the flesh. He even spends his days in a workshop! But Nathan is more than his bright smile, and he may be just the right person for Oscar. Assuming, of course, Oscar doesn't drive him and his holiday spirit away first.