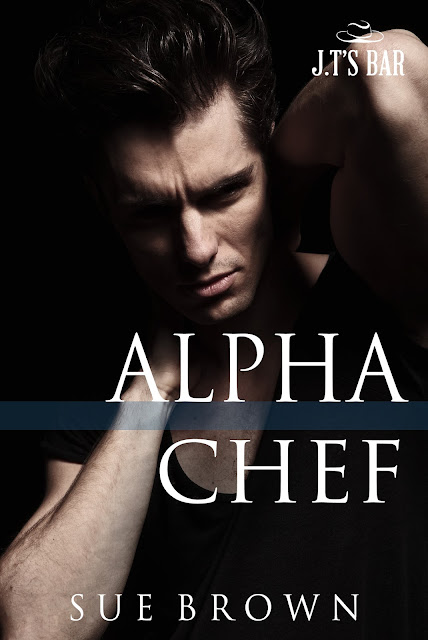 When Greg Mitchelson’s home is torched and his employer killed, Greg fears it's retribution for his past testimony against a notorious drug gang. Alone, with no money and only the clothes on his back, Greg turns to Colm Riordan, the Deputy US Marshall who's protected Greg for the last 3 years. But Riordan doesn’t return Greg’s phone calls, and the local Marshal’s office refuses to help him.


In desperation, Greg goes on the run to Wyoming to find his brother, Mitch, whom he hasn’t seen in over a decade. As he reconnects with his brother, Riordan appears, searching for his missing witness. But Greg needs the answers to a lot of questions before he’ll trust Riordan again. Why didn’t he return Greg’s call? Is Riordan there to help Greg – or kill him?

3.75 out of 5 stars
Alpha Chef is the second book in the J.T's Bar series by author Sue Brown. I would recommend reading these books in order because the characters from the first book appear often in the second book.

This book was better than the first book for this reader. I really liked the two main characters, and I liked the story with Mitch and Greg finally connecting after all these years, but there were still some things that didn't necessarily work for me. That's not to say that the book overall wasn't enjoyable.. it was. The things that didn't work for me may work fine for other readers. I felt that some things were just glossed over too easily and the romance with Riordan and Greg was overly sudden. However I thought those two worked well together as a couple and felt better to me than then Mitch and Jake in the first book.

The plot for this book was more cohesive than the first book but still had some points that just were rushed to move the plot forward. The story was still very readable it just felt too easy for a romantic suspense story, which is the main plot point. Again the story still worked it just could have had a touch more added to the back story and the suspense part of the plot for me.

I can say that this is a decent read, pacing isn't bad, and the core group of characters works well together and enhances the story.