When a cloud falls to earth, Calla sets out to find what lies beyond the sky. Father says there’s nothing, but Calla knows better. Something killed that cloud; someone brought it down.

Raised on legends of fabled skymen, Calla never expected them to be real, much less save one from drowning—and lose her heart to him. Who are the men who walk on water? And how can such strange creatures be so beautiful?

Infatuated and intrigued, Calla rises out of her world in pursuit of a skyman who doesn’t even speak her language. Above the waves lies more than princes and politics. Above the sky awaits the discovery of who Calla was always meant to be. But what if it also means never going home again?

When the sand settled, only silence remained.

The explosion had gone on for what felt like forever—a great boom that shuddered through the water, a shadow that had borne down on the nest like the end of the world had come, and then nothing but panicked escape from the crushing water, the darkness, and the suffocating whirlwind of sand and stones. In the terror, it had seemed like it would never end.

But it did end, eventually. When it did, Calla lay hidden in the gardens, deafened and dazed. She was shivering, though it wasn’t cold. An attack. They had been attacked. By what? Orcas and rival clans could hardly end the world. And what would wish to attack them so?

She took a breath. And another. Her attempts to calm herself felt pathetic and weak, like the desperate attempts of a mewling child. Where was Father? Her sisters? Where even the crabs that chattered and scuttled amongst the bushes? She was alone in the silent gardens, and Calla had never been alone before.

Slowly, she reached out. Slipped through the towering trunks, to the very edge of the gardens, to where the noise had come from. Drew aside a fern and—

Ducked down, clapping a hand over her mouth to prevent the gasp.

A giant beast lay in the courtyard.

Still. Oh, great seas, be still. She held her breath and closed her eyes. It had to be an orca, a beast so huge, and it would see her if she moved.

Yet even in her fear, Calla knew that wasn’t quite right.

Nor was it an orca. It was impossible, too huge even for that. Oh, she’d not seen an orca since she’d been a merling, but they’d never been that big. It had squashed the courtyard flat under its great belly, its tail and head—though she couldn’t tell one from the other—spilling out over the rocks and nests that had been homes, once. It would have crushed their occupants, surely. What beast killed by crushing?

Hesitantly, she drifted out of the garden. Her tail brushed the ferns, and she wrapped her fins around them, childishly seeking comfort.

In fact, it didn’t breathe. Its enormous ribcage, dark and broken, was punctured by a great hole, a huge gaping blackness longer than Calla’s entire body, and wider by far.

It had been slain.

Bloodless. It was quite dead. How could it be dead, how could its heart have been torn out so, without spilling blood into the water? Where was the column of red that marked its descent? Where was—

It was no beast.

Calla fled the safety of the gardens in a flurry of excitement. No, that great oval shape was familiar. How many had scudded gently across the sky in her lifetime? How many times had she watched their passage from her window? Beautiful, dark, silent wonders. Oh, a cloud!

She rushed closer to look. How could a cloud have fallen to earth? Father had said they were simply things that happened in the sky, and no concern of theirs. But this one had fallen, lay here and near and so very touchable—and now Calla wanted to touch the sky.

She held her breath—and touched it.

Rough. Sharp. Its body was dark against her pale hand. And hard, so very hard. She had imagined clouds to be soft and fluid, to walk on water as they did, but it wasn’t. Huge and heavy, it was a miracle that it walked at all.

And a home: tiny molluscs clung to it. As she walked her webbed fingers up the roughness and came over the crest of its enormous belly, she mourned its death. This must have killed it. Such a deep, round belly—clouds were obviously like rocks and stone, but this one had been cut in half. Exposed to the sea was a sheer, flat expanse of paleness, with great cracks in the surface. A column stuck out from the middle, and two smaller ones at head and tail. It had been impaled by something, the poor thing.

The hiss reached her from far away, but Calla ignored it. The poor cloud was dead. It had been slain, and whatever had dragged it from the sky must have been immense, to wield spears like those jutting from its body. And it wasn’t here.

Clouds were harmless. Dead clouds, even more so.

“Calla, what are you doing?”

“Meri, come and see!” she called back to her sister and ducked to swim along its flattened insides. Great ropes of seaweed, twisted into impossible coils, trailed from its bones. Vast stains, dark and pink, smeared its ragged edges. When Calla peered up into the sky, at the stream of bubbles still softly rising from its innards, she could see the gentle descent of debris. It had been torn apart.

Orcas? But an orca pack would have followed it down. Sharks? Calla had never seen a shark, but Father had, long ago when he was a merling, and he’d said they were great and terrible hunters. Were sharks big enough to do it?

That was not Meri’s voice. Deep and commanding, it vibrated through the water like a blow. Calla found herself swimming up the side to answer automatically, and came clear of the cloud’s gut barely in time to prevent the second shout.

Father did not like to call a second time.

She went. At once. The immense joy at her discovery was diminished in a moment by his stern face and sterner voice, and Calla loathed it. She felt like a merling under Father’s frown and struggled to keep her face blank instead of echoing his displeased expression.

“You should stay away from such things. The guards will deal with it.”

He gave her a look. She ducked her chin and drifted across to join her sisters at the window. The window. Pah. What good was the window, was seeing, when she had touched it?

“What is it?” Balta whispered, twirling her hair around her fingers.

“A cloud,” Calla said in her most impressive voice and then pushed between Meri and Balta to peer out. The guard were swarming over the cloud’s belly, poking more holes in the poor thing’s body. “Something killed it.”

They subsided under Father’s booming reprimand—although Calla snuck in a quick pinch before stopping—and returned to watching.

“Clouds don’t fall out of the sky,” Meri whispered. “It must be a shark. There’s nothing so big as a shark. Father said so.”

“That’s a cloud,” Calla said and peered upwards to the sky, her eyes following the great trail of bubbles, “and I bet something even bigger killed it.” 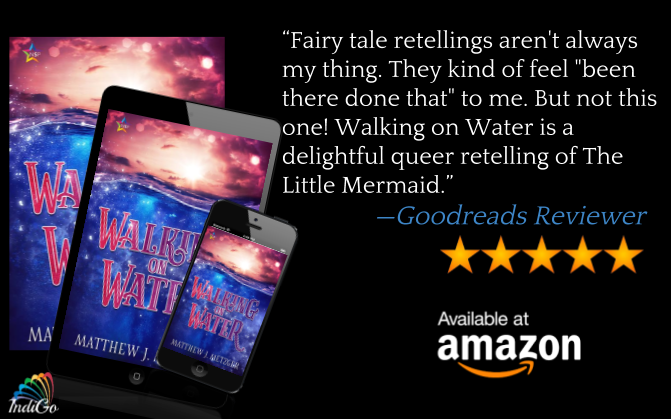 Mine! Despite the fact we speak the same language as most people in the queer fiction world, British people are very culturally distinct and it's painfully obvious when people are trying to write us from that Hollywood perspective where we all have glass-cutting accents and are from London. (Seriously, I am so sick of books set in London, stop it!) The UK isn't some cute place with super polite people and funny accents all over the place, and I'm really sick of seeing it, so I write the other type of British. The terraces, the football hooliganism, the drunk tourists, the type of British that I don't think Americans especially really know exists. (Our European neighbours however are very aware of this type of Brit and for that I am sorry!)

2.      Do you think translating books into languages other than their origin forces the intended essence away?

Oh my God, no! Just look at the Asterix comics—the translations of those are amazing. They gave me my love of languages, purely because of the wordplay in the character's names, and the names have to change in every language to do that wordplay. Names like 'Unhygienix' for the blacksmith just wouldn't make sense in Spanish or French or German, and in those languages, the character has a different name. All you need is a fantastic translator, who not only speaks other languages but really understands the culture and context behind them.

3.      Doesn’t it bother you that when books are turned into movies, they are often changed to suit the audience needs?

Not at all. TV and film are very different types of media, and the audiences are usually very different as well. Take humour—a book relies on the written word to convey something funny, whereas a human being can pull a face at you and it can be hilarious. So changing a book to fit film delivery, that makes perfect sense. What bothers me is usually what they chose to change, not the simple fact that something did change.

4.      Do you believe it is more challenging to write about beliefs that conflict with the ones you hold yourself?

Yes. To portray someone sympathetically and believably who buys into a philosophy you don't, that's a big challenge, especially if it's important to both you and the character.

5.      Have you ever written a character based on the real you in some part?

I think all my heroes are based on my beliefs in some shape or form, especially my young adult heroes. I had a really rough time as a kid and it's hugely shaped what can hurt me and how I'll react. But I like to push out of my comfort zone as well, so I frequently write characters who have very different views from me as well, everything from being religious to being vegetarian. I've never gone full self-insert, but there's been the odd real life moment pop up here and there.

6.      Do any of your family members make occasional cameos in your books?

Sort of. I've based characters off their 'type', so to speak. So the father in Private was very much based off my own dad, this gruff type of father who does love his kids but has that British way of showing love that involves, “Give over, you daft berk!” at any sign of sentimentality. And my young adult characters don't tend to have siblings close in age to them, because my siblings are several years apart from me in age. So it's more that my family framework cameos than the people themselves. Although the way my great-granddad died was mentioned in Sharing Secrets! (Seriously, it's funnier than it sounds.)